A version of this was published in The Santa Fe New Mexican
July 2, 2010

Peter Case, who is playing a free show in Los Alamos Friday, sounds like he’s having more fun on a record than he’s had in years with his new album, Wig!

For more than 20 years, Case has built a respected (if not overly lucrative) career as a singer-songwriter/neo-folkie, whatever you want to call it. He’s done some wonderful albums in this vein, the best being The Man With the Blue Post Modern Fragmented Neo-Traditionalist Guitar (1989) and Torn Again (1995). I could also mention 2000’s Flying Saucer Blues, but Case’s old record company actually paid me to write some propaganda to send out to potential reviewers and radio stations for that record, so my opinion of that one is compromised. 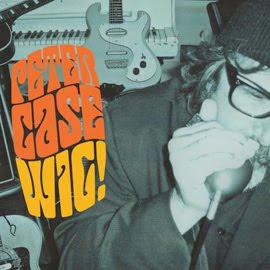 Case is so good in the acoustic troubadour role that many of his listeners might not even realize that he’s also an accomplished rocker. In the late ’70s and early ’80s, he was the frontman in The Plimsouls and, before that, The Nerves.
Case recently reimmersed himself in the music of his early bands. While recovering from cardiac surgery, he assisted in remastering a Nerves reissue (One Way Ticket) and concert album (Live at Pirate’s Cove) as well as a live Plimsouls album (Live! Beg, Borrow & Steal, which I reviewed here earlier this year). Remastering these old live recordings woke up the rocker inside.
Aided by guitarist Ron Franklin and D.J. Bonebrake, the drummer for X, Case recorded a bunch of blues-soaked, swampy rockers for this album, which was released just days ago. In short, it’s some of the toughest music he’s ever made.
The seeds of Wig! were first sown a quarter-century ago. The song “‘New’ Old Blue Car,” which starts out with some fine caveman drumming from Bonebrake, is a slightly rewritten version of “Old Blue Car” from Case’s first solo album (Peter Case, 1986), a tune written with his then-wife Victoria Williams. While the original, produced by T-Bone Burnett and Mitchell Froom, has slight hints of that 1980s studio sheen, it was bursting with the blues-raunch abandon that guides the new album.
Wig! starts out with a Case story-song called “Banks of the River.” It’s about a couple of brothers, Frank and Tony, who run away from home and eventually get in trouble with the law. The story could have come from one of Case’s ’90s albums, but the pounding piano, grating harmonica, and smoldering guitar are harbingers of what awaits you on this album.
The jittery “I Dig What You’re Puttin’ Down” sounds like an inspired melding of Blonde on Blonde with Canned Heat. There’s a slight digression into Heat’s “Catfish Blues,” but even cooler is when Case apes Elvis — ”I want you, I need you I-iiiiiii love you!” What’s impressive is how seamlessly he pulls it off.
This is just one example in which Case has fun throwing in some obvious references to rock ’n’ roll standards. “Ain’t Got No Dough” starts out with the pounding piano riff from Barrett Strong’s “Money (That’s What I Want),” a song covered by the Beatles, Jerry Lee Lewis, and others. “The Words in Red” features a jangle-guitar riff straight out of The Byrds’ “So You Want to Be a Rock ’n’ Roll Star.”
The title of the rocking “House Rent Jump” recalls John Lee Hooker’s “House Rent Boogie,” as does the basic theme of the song (the singer doesn’t have enough cash to pay the rent). But Case and the band sound more like Hound Dog Taylor here.
On “Thirty Days in the Workhouse,” a Leadbelly song, Case plays an acoustic 12-string guitar, and Bonebrake keeps it stompin’. Things slow down for a while in “My Kind of Trouble,” a piano-driven blues on which Case wails like he’s leading an after-hours jam in some dangerous skid-row dive. “She got an hourglass figure and a glass eyeball,” Case sings. “Somebody Told the Truth” sounds like it came right out of the swamp with its tremolo guitar and conga drum. It’s easy to imagine Tom Waits doing this song.
After “Colors of Night,” another rough blues romp, Case goes back to worrying about the rent in “House Rent Party,” the album closer. Surprisingly, this sounds like less of a party than anything else on the album. The singer rages against his poverty, pins his hopes on the lottery, and vows to start a brand new band: “We’ll play anywhere but here.” It’s another 12-string acoustic song; in fact it’s just Case without the band. 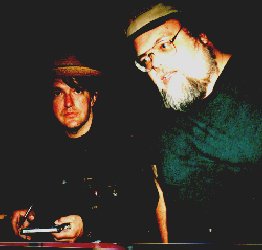 Perhaps it’s a signal that Case isn’t turning his back on this side of his music. He’s still a dang fine acoustic troubadour. But it’s the wild and rowdy tunes that carry this record. I hope Case keeps rocking.