A version of this was published in The Santa Fe New Mexican
July 23, 2010

Synchronicity is a funny thing. 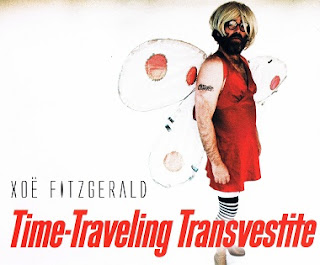 Early this month, I received a review copy of Xoë Fitzgerald: Time-Traveling Transvestite, a new album from Frogville Records that starts off with a spoken introduction by Fitzgerald, whose voice spookily resembles that of songwriter Joe West:

In the summer of 1975, a bright light was seen falling into the hills south of Santa Fe, NM. Some claim it was a meteor. Others say that later they found a strange unearthly substance that appeared to be the remains of a flying vehicle. Shortly thereafter, a child was born to a young hippie girl who made her home in the old mining town.

Indeed the album — which is unleashed publicly Friday, July 23, at Tiny’s — is what some might call a “rock opera,” telling the story of a mysterious, time-traveling, cross-dressing union organizer.
Then, less than a week later, an editor forwarded me an email containing a link to a blog with this startling information about more time-travel activity in Santa Fe:

According to (Andrew) Basiago, the U.S. government already had a fully operational teleportation capability in 1967-1968, and by 1969-1970, was actively training a cadre of gifted and talented American schoolchildren, including himself, to become America’s first generation of “chrononauts” or time-space explorers.
He confirms that the United States has been teleporting individuals to Mars for decades and recounts the awe-inspiring and terrifying trips that he took to Mars in 1981. He describes how he and his father (an engineer working on time/space research projects for the U.S. defense department) would teleport from Woodridge, NJ, to Santa Fe, NM, and return via a teleportation device at Sandia National Labs in Albuquerque.

On my political blog I wrote a tongue-in-cheek post quoting that Information Farm blog article about “Project Pegasus.”
By the next day, Basiago himself responded, telling me that “Santa Fe was the Kitty Hawk of teleportation” and claiming that Gov. Bill Richardson was involved. “Mr. Richardson was a young staffer on Project Pegasus who took roll when we first began teleporting to the New Mexico state capitol in group training exercises held in Summer 1970. That’s right, Bill Richardson’s first job in government was as a staffer on a secret time travel project!”
(As a political reporter, during the past eight years I’ve frequently asked Richardson questions that made both of us uncomfortable. But I haven’t worked up the courage to ask him about this.)
So, soon after Basiago and his pint-size “chrononaut” pals were zapped from New Jersey to Santa Fe, there was that bright light seen falling south of Santa Fe and the birth of the “boy with paisley eyes.”
Synchronicity overload. And there’s more mystery. The liner notes of Xoë Fitzgerald: Time-Traveling Transvestite say that the album “was conceived by Joe West in the year 2007 at Club Alegria. ...”
But let’s travel back in time a bit to late 2005, when I interviewed West for an article in New Mexico Magazine. (CLICK HERE, scroll way down)
There he told me about “his contraption called The Intergalactic Honky Tonk Machine, which West says is a ‘time traveling music device,’ which includes a drum machine, electronic tape loops, and a smoke machine. And he’s talking about doing a concept album about an ‘androgynous time-traveler space character’ who claims to be the love child of a glam-rock star, conceived in New Mexico during the filming of The Man Who Fell to Earth.” 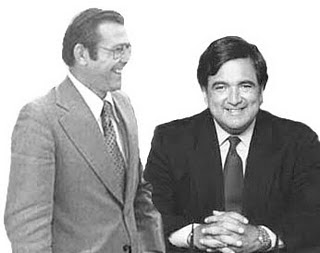 Indeed David Bowie made that film shortly after the Project Pegasus experiments. Part of it was shot in Madrid just down N.M. 14 from the Cerrillos Cultural Center amphitheater, where according to the Information Farm article, Project Pegasus members sat and listened to speakers such as Donald Rumsfeld.
It’s probably worth noting that the interview with West took place at the Cowgirl BBQ, which is just a half mile or so from the state Capitol, where Basiago and the other children of the Pegasus Project were teleported in the early ’70s.
And come to think of it, in April 2008, I saw West play with the Santa Fe All-Stars at an event at the Capitol Rotunda — an event attended by none other than Bill Richardson! I have no solid evidence, but you have to wonder whether the governor used this occasion to pass on information from Project Pegasus to West to use in Xoë Fitzgerald.
The “coincidences” keep piling up!
Is there a record review in here somewhere? Joe West has made some of the finest country-rock albums ever to come out of New Mexico. If you’re a country-rock purist, the music on Xoë will jar you. Fortunately, I doubt that West’s following includes too many rabid purists.
The record rocks with a refreshing sound. The band, which includes Josh Martin, Margaret Burke, Arne Bey, and John Courage (who has since teleported out of Santa Fe), Xoë leans heavily on the glam rock of the 1970s — Bowie, Mott the Hoople, Lou Reed’s Rock ’n’ Roll Animal period, a little T-Rex.
There’s a song called “I Wanna Party (Like It’s 1985),” but this party sounds a lot more like 1974. And “The Good-Time Kids” sounds more like 1965, with a Question Mark & The Mysterians sound. That and “Xoe’s Favorite Honky-Tonk” are currently my favorite West rockers on the album. West has rarely, if ever, recorded a cover song (I’m still pushing for him to put Glen Campbell’s “Rhinestone Cowboy,” which he frequently performs live, on an album), but he and his band do quite an impressive version of Bowie’s anthem “Heroes.” I won’t give away the plot, but this song comes at a very appropriate emotional moment in the saga.

The album ends with a sweet acoustic coda, “Butterfly.” It’s a low-fi recording that sounds like Xoe’s transmitting from a far-away dimension.
CD release party: Xoe Fitzgerald and his honky-tonk glam co-conspirators play at 8:30 p.m. tonight Friday, July 23, at Tiny’s, 1005 St. Francis Drive, Suite 117. Admission costs nothing, and the first 50 who show up get a Xoe bumper sticker.
at July 23, 2010