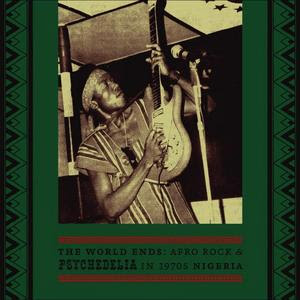 * The World Ends: Afro-Rock and Psychedelia in 1970s Nigeria by various artists This is the latest collection from the incredible Soundways Records. I spent nearly half my monthly credits on this cool collection, but it's worth it.

In the early '70s, following the bloody Biafran civil war, Jimi Hendrix guitar and James Brown funk invaded Nigeria.
Fuzz and wah-wah seized control of African guitars. Slinky organ sounds crept into the music. And the African drum was stronger than ever.

Bands like The Hykkers, Cicada and The Semi Colon created funky little masterpieces. In "Ottoto Shamoleda" by a band called Colomach you could hear a little Santana. The Hygrades' "Rough Rider" would fit in the soundtrack of any decent Blaxploitation movie.

And I like the advice of Chuck Barrister & The Voices of Darkness: "Be Kind, Be Foolish, Be Happy." 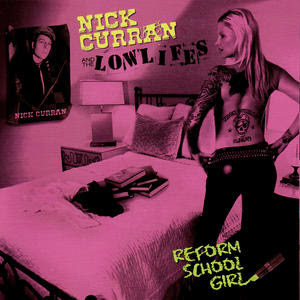 * Reform School Girl by Nick Curran & The Lowlifes. I owe Los Alamos music fiend Russ Gordon for turning me on to this band.
Basically Curran plays some of the roughest, rawest R&B/rockabilly this side of Barrence Whitfield. This album has a lo-fi, '50s car-radio sound to it. Curran sounds as if he's channeling Little Richard filtered through the ghost of Ronnie Dawson, the late rockabilly rowdy, with whom Curran used to play.
But the title song reveals a Phil Spector side. Probably Shadow Morton would be a more apt comparison, as the song has a distinct "Leader of the Pack" vibe to it.
Curran & The Lowlifes are playing up in Nuke City as part of Gordon's Free Concert Series on Friday August 20.

* The 35 songs from The Very Best Of by Hoosier Hot Shots that I didn't get last month. (This only cost me five credits though because the eMusic price was 40 tracks for 12 credits and I downloaded seven tracks last month. What a deal!)
Basically these Indiana cut-ups, who started recording in the early '30s, were the harbingers of Spike Jones. The slide whistle (played by Paul "Hezzie" Triesch) was an important part of the Hot Shot sound, as was the clarinet, played by Gabe Ward.
Among the tunes in this collection are whizbang versions of American standards like "The Band Played On," "Sioux City Sue," "Toot Toot Tootsie," and "I Wish I Cold Shimmy Like My Sister Kate." There's also some bizarre obscurities by the quartet. My favorite is "I've Got a Bimbo Down on The Bamboo Isle." I found a scratchy old 1920 version of this tune by Frank Crumit on the Internet Archive a few years ago. It's about a swell gal who "all she wore was a great big Zulu smile." As I wrote of this song in a column a few years ago, "A ship wreck never sounded so sexy."
* 9 tracks from Hillbilly Classics. Talk about deals ... This is a 73 (!!!) song collection of mostly obscurities from the '40s and '50s. Costing only 12 credits, it's definitely one of the biggest bargains I've stumbled across on eMusic for some time.
My favorites of the ones I nabbed for now are "Nothin' Clickin', Chicken" by The Down Homers and "My Dreamboat Hit a Snag" by Louis Innis & The String Dusters." I'll start downloading the rest of this when my account refreshes.
at August 07, 2010