Today I received a response from Jeff Vee, who is organizing the music for the Clovis Music Festival, regarding my story on The Coasters that was published in Sunday's New Mexican.
Also, I got word from Rep. Al Park, D-Albuquerque, last night and he said he'll be sponsoring the Truth in Music bill again in next year's Legislature.
Here's what Mr. Vee said:

I regret missing your call Friday as our office was closed and I was not actually aware you had called until this morning and had first seen your story yesterday. For what it is worth, however, I thought I would follow up as a professional courtesy and to let you know our feelings about the situation as it pertains to your article.

First off, with my father being 60's singer Bobby Vee, we have always been serious advocates for "Truth in Music" by keeping the fake groups off of shows we are involved with where and when possible. They are a detriment to the real artists still performing and a disservice to fans. This we fully appreciate as it effects our business very directly.

Billy Richard's group was formed by Bobby Nunn who was an original Coaster as well. Believe me, I know that a PHD thesis could be written on the this and the many other groups that have splintered and morphed over the years. Billy Richards actually grew up performing with his uncle's group "The Robins" which later became the Coasters. After the Coasters split Carl and Bobby each formed groups within their legal rights and Billy went on to front Bobby Nunn's show for years. As with many groups of that period there were a lot of versions, some legitimate, many not (Drifters, Platters, etc). As an aside, Bobby and Billy's version of the group were the Coasters of choice for many years for Dick Clark's revival shows. I myself go back over 30 years with the group and my Father much further. We have fond memories of Mr. Nunn as does my entire family and many friends in the industry. It was always a wonderful and first class show and still is. When Bobby passed, Billy filed for the legal rights to continue the legacy of what had been his livelihood for over 40 years. A judgement was made in a court (attached) that Billy did in fact have a right to continue to perform as "Billy Richard's Coasters." The bottom line fact today is that there is not an "original" Coaster performing in any group. It is quite clear that there are two legal Coasters groups, Carl's & Billy's. As you may be aware, there have been many others over the years, and I'm sure still are. These are the bogus groups and are an entirely different story, and yes: a major problem. 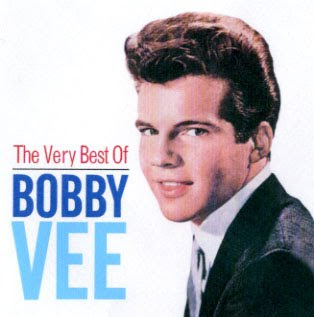 We understand there are hard feelings that remain between these two groups, however, we feel the festival just got caught in the middle. Everyone involved with the Clovis Festival was made clearly aware of the two groups and the differences before Billy Richard's group was booked. There was a mistake made when the show was listed on the website that unfortunately flew under our radar, however, was quickly revised when we realized this.

BIlly's group did not appear out of nowhere. It is and has been working consistently for over 50 years. It feels to us that the Santa Fe paper has allowed itself to be a vehicle for someone's personal vendetta and did not hear and report the whole story. In our view Billy's connection to the Robins, added to his lengthy history with The Coasters/Billy Nunn makes his the most authentic and credible show going today.

The Clovis Music festival has a mission statement that simply states a goal of bringing first class entertainment into it's community in the form of rock and roll to celebrate the city's musical history and the legacy of Norman Petty and his world famous studios. This is something we feel the entire state of New Mexico should be very proud of. My Dad first recorded with Norman in Clovis in 1960. Our history with the city, the studios and the event is very special to us. We feel with total confidence that we are on track with festival's mission statement. Our only goal is to preserve and to promote a great piece of American pop culture and a history that is also part of our personal fabric by doing what we know how to do: produce and perform in shows.

While the 'Coaster' story makes for interesting news, it will undoubtedly affect the music festival and the city of Clovis adversely.

(Click image to see 1997 court document to which Vee referred) 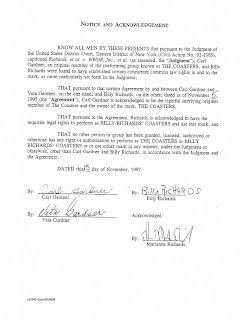