I'm not sure whether to post this one in my music blog or my political blog. Guess I'll do both. 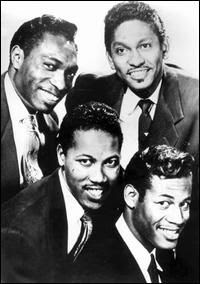 Today The New Mexican published my story about Veta Gardner, wife of Carl Gardner, the last living member of The Coasters, being upset about an imposter version of The Coasters playing The Clovis Music Festival. Initially the festival advertised that The Coasters were playing, but after complaints, the festival website was changed to reflect that these Coasters are "Billy Richards' Coasters."
As Mrs. Gardner points out, the website still says Richards' Coasters "breathed life into classic Leiber & Stoller songs like: `Charlie Brown,' `Yakaty Yak,' (sic) `Love Potion No. 9' and many more." She also said using the phrase "Clown princes of Rock 'n' Roll" is a copyright infringement.
Richards was a member of an early '60s Coasters offshoot, started by Bobby Nunn, an original member who Veta Gardner says was fired from the band in the late '50s. But he didn't record with the actual Coasters on those songs listed above or "Along Came Jones," "Searchin'," "Youngblood" or any of the Coasters hits you might remember.
The story of "the man with the big cigar" ripping off rock 'n' roll artists in the '50s and '60s is well documented. "Imposter" bands is just another way to screw the artists who created the music.
This issue -- a phenomenon that has been going on for decades -- was discussed last year in the state Legislature. (Here's my column about that .) The House passed the "Truth in Music Act," sponsored by Rep. Al Park, D-Albuquerque, and the bill made it through the Senate Judiciary Committee. But the session ended before the full Senate could vote on it. Maybe next year. 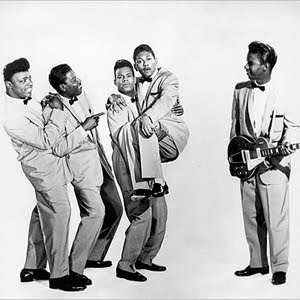 A little story-behind-the story: The issue of The Coasters at the Clovis Music Festival was first brought to the attention of Veta Gardner, the festival, myself and anyone else who would listen by a lady named Virginia Pritchett. Though she lives in Texas now, she's a former College of Santa Fe student who was raised in eastern New Mexico. Virginia is a record collector, an "oldies" fanatic who used to be a DJ at an oldies station in California. She's genuinely concerned about imposters harming the livelihood of the musicians who created the music.
She pointed me to this 1997 article in the New York Observer about Carl Gardner's long struggle against imposters.
And here's the link to the Vocal Group hall of Fame Foundation, which is leading the effort nationwide for "Truth in Music" legislation.
Here's a 2007 report on this issue by ABC's 20/20 featuring a confrontation between a real Drifter and a fake Drifters group.

Here's a video of The Coasters