TERRELL'S TUNE-UP: GUNK IT UP!

A version of this was published in The Santa Fe New Mexican
August 13, 2010

Here’s a music movement/era/subgenre/subculture you’ve likely never heard about: gunk punk.
Don’t feel too shamefully unhip if you haven’t heard of gunk punk. Nobody else had either before Eric Davidson made up the term to describe bands that, as he puts it, “unknowingly reestablished punk rock as — surprise, surprise — fast, funny and furiously fucked-up rock ’n’ roll.”. 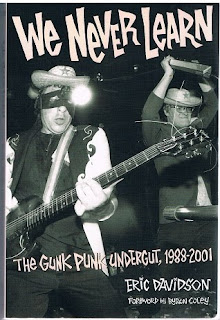 Davidson was the singer of a Columbus, Ohio, band called New Bomb Turks, which roamed the Earth between the early ’90s and early ’00s. Davidson, now an editor at the music-business magazine CMJ, recently published his first book,We Never Learn: The Gunk Punk Undergut, 1988-2001 (Backbeat Books).
So what is this gunk? Davidson explains in the introduction:

“In the early ’90s, where it’s generally assumed that Nirvana, R.E.M., Marilyn Manson, and The Offspring brought ‘edgy’ to the mainstream, there was a fringe on the fringe, an exponentially growing gaggle of low-rent rockers who, owing to their innate retrograde preferences, were never fashioned into a marketable moment by a Spin article or an Entertainment Weekly sidebar. And even if some critics lazily tagged these bands as ‘just’ more punk, that helped little since by the early ’90s ‘punk’ mostly meant leftover, unsmiling, hardcore, or candy-coated skate-punk. ... It seemed that ass-shaking rock ’n’ roll was about to be washed into history’s moldy basement — which, of course, is as good a place as any to start a party.”

Davidson documents this party by interviewing fellow musicians from perpetually below-the-radar bands like The Lazy Cowgirls, Pussy Galore, Dead Moon, The Supersuckers, The Oblivians, the Candy Snatchers (who did a song that provided the title for this book), and dozens more plus folks from labels that purveyed the gunk — Crypt, Norton, Sympathy for the Record Industry, In the Red, Epitaph (which was better known for its skate-punkers but was also home for a while to New Bomb Turks). 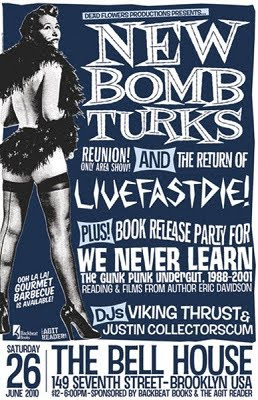 Often the music Davidson writes about is classified as “garage” or “garage punk.” Many of these musicians admired what came to be known as garage bands of the mid-’60s. But Davidson turns up his nose at retro “Beatles boot” bands. “Bands like The Fuzztones, Chesterfield Kings, and others were practically devolving into nostalgic tribute acts,” he writes.
Like the book’s subtitle suggests, the glory days of gunk were done shortly after the turn of the century. Many of the bands had broken up, and many others were on the verge.
And yet this was about the time the mainstream press started yakking about the “garage revival,” thanks mainly to groups like The Strokes, The Hives, and The White Stripes. “The Strokes were being described as ‘raw’ based on the fact that you could hear a guitar,” Davidson wryly observes. “It was neato in a way to see big mags like Rolling Stone, Spin, etc., mentioning bands like The Sonics and The Stooges in articles about the trend. But once the wave really crested around late 2001, a natural knee-jerk response among gutter-rock fans was to feel exasperated. Rarely was there a mention of all the previous bands and scenes that these hyped acts came from.”
Jack White of The White Stripes declined to be interviewed for the book, instead sending a cryptic email about Edgar Allan Poe, Davidson said.
Though the book has a tendency to get rather inside baseball-ish, there are plenty of great stories, funny characters, and wish-I’d-been-there moments. And while most of these groups aren’t full-time endeavors anymore, We Never Learn gives you the feeling that as long as young rockers are willing to go out and on the road and play in weird little clubs or moldy basements for very little cash, the spirit of gunk will live forever.
Put down the book. Let’s rock! Davidson has a bonus for those who purchase We Never Learn. It’s a 20-track download of MP3s from the bands he writes about in the book: The Devil Dogs, Clone Defects, The Cynics, The A-Bones, Death of Samantha, The Digits, Archie & The Pukes, and of course New Bomb Turks.
Most of the selections are obscurities: demos, live recordings, alternate takes, cuts from compilation albums, and so on. As a collection, the downloads provide a reader with a good idea of the basic sound Davidson is writing about — fast, furious, sloppy, primitive, lo-fi, and lots of fun.
Among my favorites here is “Your Fat Friend” by The Raunch Hands. It’s a hyper boogie — Canned Heat succumbing to “Amphetamine Annie” — with a wailing sax solo. 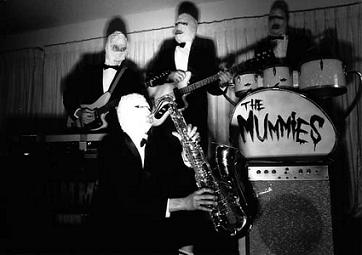 From The Oblivians there’s “Memphis Creep,” a pounding put-down of a would-be scenester from the group’s hometown who has “a creepy pony tail” and will “get you high and steal your wife.”
You can almost smell The Mummies’ sweaty gauze costumes on the lo-fi, Farfisa-heavy instrumental “Mashi.”
The Dwarves show why Davidson loves them so much with an explosive version of “Throw That Girl Away.” The guitarist, known as “He Who Cannot Be Named,” sounds like he’s on fire.
“There but for the Grace of God Go I” is from The Gories’ final album Outta Here (1992). It shows the trio was pretty much at its peak of primitive glory when it disbanded, though when I saw the reunited Gories recently in New York, they proved they’ve still got that flame. “Girl from ’62” by Thee Headcoats is a classic slab from British poet/painter/garage-rock priest Billy Childish. Fans frequently argue over which of that eccentric genius’s bands were the best. I’ll vote for Thee Headcoats, which was his primary outlet during the late ’80s and the ’90s.
Davidson, in compiling this collection, made sure his own band didn’t get shortchanged. In fact, New Bomb Turks’ “Slut,” a live version of a tune written by fellow Ohio band Scrawl, might just be the strongest one here. It’s a four-minute burst of raw energy that starts out with someone giving Davidson a flower onstage. I’m not really sure why he’s screaming “Sympathy for the devil” by the end of the song, but it works.
Gunk online: For an interview of Davidson by the goons at Real Punk Radio, CLICK HERE.
at August 12, 2010