A version of this was published in The Santa Fe New Mexican
August 27, 2010

Even before he formed Wall of Voodoo back during the New Wave scare, Stan Ridgway had a cinematic perspective on the music he makes. Many of his songs — the instrumental “Heat Takes a Walk,” epic meditations like “My Beloved Movie Star” — sound like they were ripped from celluloid. Even some of his albums, the noirish The Big Heat being the most obvious, seem like soundtracks.

So when I popped Ridgway’s new one, Neon Mirage, into the CD player and heard the opener, “Big Green Tree,” it occurred to me that all his musical work might be considered one big soundtrack of his life.

Here was a recurring theme. The song first appeared on Ridgway’s 1995 album Black Diamond (as “Underneath the Big Green Tree”). It’s a wistful, bittersweet tune, more first-person confessional than Ridgway usually gets (especially back in 1995).

“Is there a home, a home for me?/Where the people stay until eternity?/Is there a road that winds up/Underneath the big green tree?” 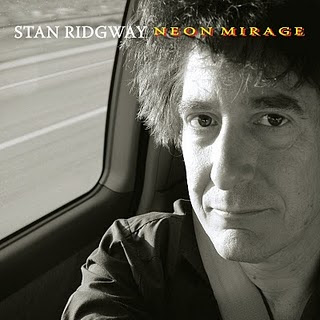 It seemed like a fitting song for Black Diamond. That was Ridgway’s first solo album on an independent label, and he undoubtedly was feeling somewhat chewed up and spit out by his experience in the majors. And indeed, it seems appropriate for Neon Mirage, an album that, as Ridgway has explained, was forged when several people close to him — including his father, an uncle, and one of the musicians who plays on some of the tracks — died.

“Events like that can’t help but have an impact on the music you’re making at the time,” Ridgway said in his blog. “You’d be lying to yourself — and your listeners — if you thought otherwise. I’ve probably confused people with my music, my choices, the albums, and the changes in direction from year to year. But I can’t help it. There’s a weird old American jukebox in my head, and it still plays everything that’s ever got under my skin.”

In the new version of “Big Green Tree,” produced by Dave Alvin, it’s amazing how Ridgway’s voice has matured since the first one — not that he was a spring chicken in 1995. But now his voice sounds richer, more wizened, sadder, and wiser.

And singing background harmonies is Amy Farris, the violin player who committed suicide last year before the album was completed.

The new songs on Neon Mirage are pretty remarkable too. “This Town Called Fate” features the Western — well, probably spaghetti Western — sound that Ridgway has done so well since his Wall of Voodoo days.

The melody of this one sounds like it was influenced by Ridgway’s friends The Handsome Family. It’s a song built around a metaphor of impending death, fearing that “final knock on the door.” But it’s not without Ridgway’s wry humor.

“Now don’t pick up the phone, just wait until I’ve run the test/Unplug all these computers now, we’ll burn them with the rest/We’ll leave this hard drive by the tree, yes as policeman’s bait/Here in this town they call Fate.”

That classic Ridgway story line about small-time criminals and drifters running from the law — and one another — pops up in the song “Scavenger Hunt,” which features a jazzy flute by saxman Ralph Carney and a fuzzy, bluesy guitar by longtime Ridgway collaborator Rick King. We never find out exactly why the narrator’s wife has flown the coop, but there are all sorts of fascinating clues — broken dishes, a treasure map, an interstate underpass “where your uncle hid the briefcase on our wedding day.”

“Desert of Dreams” is an enlightened take on what is termed “easy listening,” with sinister touches of exotica. Images of cocktails by the pool will fill your head. But the sweet daydream starts to turn downright crazy right near the end when Carney starts blowing wild, like Pharoah Sanders ripping out pages of the Creator’s master plan. It’s like he’s trying to abduct the listener and break out of the whole vision. It’s one of the most remarkable moments on the album.

“Turn a Blind Eye,” is a smoky little rocker about the world going to hell — Ridgway’s answer to The Temptations’ “Ball of Confusion”?

Then “Like a Wandering Star” sounds like a stray show tune. It’s a bouncy little number with a subtle steel guitar and string section in the background. (Ridgway says this is his stab at the Owen Bradley countrypolitan sound.)

There are some sad, pretty, introspective songs here. “Behind the Mask” is perhaps the best example. It’s atmospheric in a Daniel Lanois way, starting off with a violin solo by Farris and ending with some psychedelic guitar by King. “Who am I behind the mask?” Ridgway croons throughout.

Neon Mirage includes a Dylan cover. It’s “Lenny Bruce,” an early 1980s song Dylan wrote for the late comic renegade. But the album ends with an original song that sounds even more like a Dylan tune — “Day Up in the Sun” has a Planet Waves vibe to it. Pietra Wexstun’s keyboards here can’t help but remind you of Garth Hudson. It’s a big, upbeat production that ends the album with a note of optimism.

If this album were a movie, the credits would be rolling during “Day Up in the Sun” and everyone would be filing out full of hope, gratitude, and popcorn. But as Ridgway fans know, this is just an intermission.

This movie ain’t over yet.

Here's a video from the album: