A version of this was published in The Santa Fe New Mexican
September 24, 2010

The first album by Grinderman is an intense burst of bile, anxiety, rage, obscenity, and loud, sloppy rock ’n’ roll. 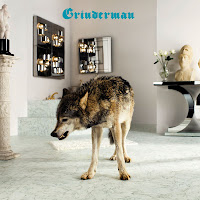 It’s my favorite Nick Cave album since 1995’s Murder Ballads. The new Grinderman album, Grinderman 2, while slightly less ragged than the original, is almost as good. And I wouldn’t argue all that hard with those who say it’s even better.

Like many, I assumed that this band — named for a Memphis Slim song and basically just a stripped-down version of Nick Cave and the Bad Seeds — was a one-off side project for Cave. When I heard a new Grinderman album was in the works, I was afraid it would be a pale shadow of the first. Such fears were baseless.

And three years older, they still can.

Going on the premise that sometimes you can judge a book, or an album, by its cover, the artwork on both albums helps explain the difference between the two efforts. On the first album, the artwork shows a monkey clutching its private parts. The colors are distorted — the animal is green, yellow, and orange. It’s like an image buried inside some advertisement designed to subliminally get you scared and angry.

The cover of Grinderman 2 is disturbing in a different way. It’s a shot of a real wolf — his fangs clearly visible — inside what looks like an upscale home — white marble floors, off-white walls, white roses in a vase, and Roman sculptures. The wolf is in the house — maybe your house. You don’t know how it got there, but it’s there.

Indeed, the wolf stalks Cave’s lyrics on several songs here. In the opening song, “Mickey Mouse and the Goodbye Man,” Cave sings of himself and his unnamed brother: “I was Mickey Mouse. And he was the Big Bad Wolf!”

Later, in “Heathen Child,” Cave sings of a girl: “Sitting in the bathtub/Waiting for the Wolfman to come!” And maybe it’s my imagination, but in the instrumental break near the end of the next tune, “When My Baby Comes,” I almost think I hear a wolf howl. It’s the same with the start of the following song, “What I Know.”

The first three songs of Grinderman 2 present a classic example of saving your best for first. On “Mickey Mouse and the Goodbye Man,” Cave howls like Chester Burnett (aka Howlin’ Wolf) on “Smokestack Lightning.”

You can hear echoes of other songs here, too: Patti Smith’s “Gloria” and The Doors’ “When the Music’s Over,” and there’s an intentional nod to blues belter Lucille Bogan’s notorious “Shave ’Em Dry.”

“Mickey Mouse” starts out with a brief, slow guitar introduction and then explodes into full-force demon rock. A bass throbs, drums crash, and a guitar spits distorted sounds as Cave sings, “I woke up this morning/I thought what am I doing here.” His brother is raging and howling at him. There’s a “lupine girl” whose hair is on fire. And someone is “rattling the locks.” In other words, a typical weekend at Nick Cave’s house.

“Worm Tamer” rocks even harder, with a mutated Bo-Diddley-conquers-the-Martians beat. It’s full of fun innuendo and double-entendre. “Well, my baby calls me the Loch Ness Monster/Two great humps and then I’m gone.”

Then “Heathen Child” takes us right back to the nightmare world of “Mickey Mouse.” A girl is “sitting in the bathtub sucking her thumb,” though she’s fully armed as she waits for that Wolf Man.

The album slows down somewhat on the next couple of songs. But even though the music on “When My Baby Comes” is more sedate than before (at least the first half, before Cave and the boys go into a Black Angels-like psychedelic excursion, the lyrics are still full of dread and violence: “They had pistols, they had guns/They threw me on the ground as they entered into me (I was only 15!)” Cave sings, reminding old fans of his songs like “Papa Won’t Leave You, Henry.”

“What I Know” is more mellow — musically, at least. The surreal sonic backdrop sounds like a desperate radio broadcast from a distant dimension. But the rage returns on the next song, “Evil.” Over an almost metallic backdrop, Cave bellows, “O cling to me little baby in this broken dream/And let me protect you from this evil.”

“Kitchenette” is the song that most reminds me of the first Grinderman album in sound and in spirit. The wolf returns, but this time it is a Tex Avery-style cartoon wolf in the house. It’s a swaggering, damaged blues number with Cave in full Nick the Lech mode, coming on to a helpless housewife. “What’s this husband of yours ever given to you?/Oprah Winfrey on a plasma screen,” he sings. “And a brood of jug-eared buck-tooth imbeciles/The ugliest kids I’ve ever seen.”

Caution, would-be ladies’ men: the surest way to bed a married woman probably doesn’t involve insulting her children. But if she likes loud, unfettered, sleazy scary rock ’n’ roll, you might just have a chance if you play her some Grinderman.