A version of this was published in The Santa Fe New Mexican
October 1, 2010 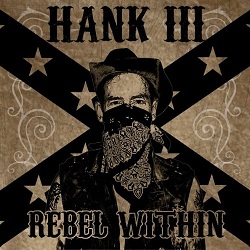 Rebel Within, the fifth album on Curb Records by the grandson of the sainted Hank Williams, has plenty to like, and there’s nothing really bad on it. Still, it lacks the punch of most his previous works, especially 2006’s Straight to Hell. This one has the feel of an odds ’n’ sods outtakes record.

I’m not exactly sure how a radical troublemaker like Hank III — whose heart lies in the world of hardcore punk as much if not more than in that of country music — ever got hooked up with a label like Curb in the first place. True, young Hank’s dad, Hank Williams Jr., has recorded on Curb for years. But by most reports, Hank III has long been estranged from Junior — who calls Kid Rock his “rebel son.”

Curb your enthusiasm: The company is run by Mike Curb, a political conservative and former lieutenant governor of California. He was also a musician, heading a vocal group called The Mike Curb Congregation. The MCC provided background vocals for the Sammy Davis, Jr. hit “The Candyman” and had a hit of its own with “It’s a Small World” — yes, the theme from the Disneyland ride. The Congregation also backed Hank Jr. on the pre-outlaw-country schlock hit “All For the Love of Sunshine.” Back in 1970, when he was head of MGM and Verve Records, Curb gained national notoriety for dropping 18 acts from the label, including The Velvet Underground, for suspected drug use.

It’s not surprising that a self-described hell-raiser and vocal advocate for drinkin’, druggin’, and — at least at one point a few years ago — devil worship would knock heads with someone like Mike Curb. Curb and Hank III have been involved in several lawsuits through the years. The company didn’t want to release a record by the singer’s punk band, Assjack. That’s certainly their prerogative.

But, in an example of pure music-industry evil, Curb also fought hard to keep Hank III from taking it to another label or releasing it on his own. The company even got a court order stopping the artist from selling self-burned copies of Assjack CDs at his shows.

As Hank III and The Louvin Brothers would say, “Satan is real.”

Hank III responded by selling T-shirts at his concerts emblazoned with the message "Fuck Curb!” He also refuses to sell his Curb CDs at his shows.

Back to the record: But maybe the slapdash, so-long-Curb-Records nature of Rebel Within isn’t the only the reason for the more subdued spirit of the album. Some songs here deal directly with the consequences of nonstop partying, crazy indulgence, and addiction. If Straight to Hell and Damn Right, Rebel Proud were parties, this one is the hangover.

The first song is called “Gettin’ Drunk and Fallin’ Down.” And, like other songs on the album, such as “Lost in Oklahoma” and “Drinkin’ Ain’t Hard to Do,” it’s more about fallin’ down than it is about the joys of gettin’ drunk. “It’s the kind of living that’s going to put me in the ground,” he moans. And you believe him.

In the title song Hank sings “The more I try to do right it just seems wrong/I guess that’s the curse of living out my songs.” This is an obvious reference to a line from a famous tune by his dad: “Why must you live out the songs that you wrote?”

Then there’s “#5,” a slow honky-tonker with heartbreak fiddle and sobbing steel guitar. It’s about quitting, or at least wanting to quit, heroin. “This is the last time the needle’s going in to try to set my soul free,” he sings. “I’ve done had four friends die around me/Now I realize that old number five just might be me.” (In an interview on Outlaw Radio Chicago, Hank said that in real life, he has never smoked crack or shot heroin.)

“Tore Up and Loud” is more like the Hank III of yore, both in content and in sound. It’s full of distorted vocals and psychobilly reason and ends with an obscene rant about being free (tempered by a sly “shave-and-a-haircut” banjo riff).

Indeed, don’t think Hank III has lost his sense of humor. The album ends with a wild hillbilly romp called “Drinkin’ Over Mama.” But it’s not your typical country mama song. Here mama starts drinking at the age of 61, and she gets killed “by her own crack pipe.”

It’s sure going to be interesting to see what Hank III comes up with next, now that he’s out of the Curb cage.

* Too Drunk to Truck by Sixtyniners. In the tradition of their Voodoo Rhythm label mates The Watzloves and Zeno Tornado, this is a European band — from the Netherlands, to be exact — that loves good old American honky-tonk music. 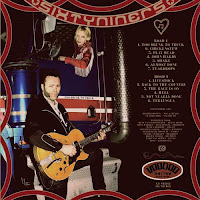 But like those other acts (and Hank III, for that matter), the Sixtyniners love it enough not to get too reverent about it. The title song, for instance, is a play on a classic by The Dead Kennedys. And “Livestock” is an animal party that starts out with barnyard noises.

Sixtyniners, led by singer/guitarist Michiel Hoving and drummer Claudia Hek, play some covers here — a spirited “John Hardy” sung by Hek, a stomping take on George Jones’ “The Race Is On,” and a fun “Almost Done,” a song that has appeared under various guises, such as Leadbelly’s “On a Monday” or, slightly altered, as Johnny Cash’s “I Got Stripes.” Here it’s done with a shuffling beat and cool trombone.

The band even evokes memories of Jerry Jeff Walker on “Terlingua,” the pretty tune that closes the album. And they can do some crazy blues too, like the Bo Diddley-esque “Hell” and “Play Dead,” in which the guitar sounds like a punkier version of Duane Allman.