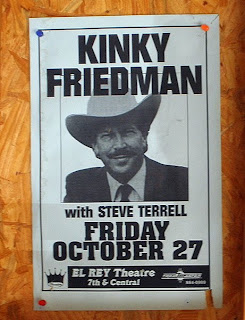 I had a hard time deciding whether to put my interview with Kinky Friedman on this blog -- after all, I first came to love him as a songwriter/performer -- or on my political blog.

But considering that most of out conversation was about politics -- and even when I asked him about his musical career, the talk veered back into politics -- I decided to put it over there.

Kinky's scheduled to be at Monte's of Santa Fe cigar store next Sunday. He said he hasn't decided whether he's going to sing any songs.

In the interest of full disclosure -- and full ego gratification -- I should mention that back in the early '90s I opened for Kinky twice when he played in Albuquerque at the El Rey Theatre. He said he remembered that when I talked to him last week, but he probably was just being nice.
at September 19, 2010