A version of this was published in The Santa Fe New Mexican
October 15, 2010


Once again, The Black Angels deliver a psychedelic whump.

With Phosphene Dream, their third full-length album, these cosmic avengers from deep in the heart of Texas offer a more varied sound than on their previous albums. The songs are shorter too. No 16- or 18-minute sonic odysseys like they had on Directions to See a Ghost and Passover.

Frontman Alex Maas sounds more confident than ever — though he still reminds me somewhat of Jim James of My Morning Jacket. 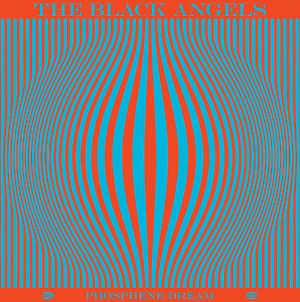 But make no mistake. As I realized the first time I ever heard The Angels — playing at a Roky Erickson Ice Cream Social during SXSW a couple of years ago — these guys play psychedelic music in the finest sense of the word.

Like Roky’s music, this is not the fairy-fey flower-power fluff that passes for psychedelic in some deluded circles. These angel-headed hipsters play intense, throbbing, hypnotic excursions to inner worlds — true to the song that gave them their name, “The Black Angel’s Death Song” by The Velvet Underground.


Something to ponder: if Erickson wanted to make an album with a young Austin band, he should have done it with The Black Angels, not Okkervil River — as he did on his last album, True Love Cast Out All Evil. That would have been a far more powerful team. (The Angels have backed Erickson in concert. Allegedly, there’s a DVD of that in the works, and you can find videos of live songs on YouTube.)

Back to Phosphene Dream — what we have here indeed is trippy. But not all trips are happy affairs. In fact, some are downright scary. And I believe there used to be a term — “bummer” — to describe chemically induced unpleasantness. The Angels have song titles like “River of Blood” and “Bad Vibrations,” which I guarantee will never be used in a Sunkist commercial. “Drink her last tear/Yeah you die for your dear/Bad vibes around her/She’s eating hearts again,” Maas sings in “Bad Vibrations.”

But no, this record is no bummer by any means. In fact, it makes me happy. Are varied than ever. There’s more attention to melody, some of which is actually catchy. And less shoegazing and more toe-tapping.

“Telephone,” which the Angels recently performed on the Late Show With David Letterman, clocks in at less than two minutes. But it’s a minute and 59 seconds worth of sheer fun — a snazzy little garage rocker with British Invasion overtones.

“Sunday Afternoon” even has a little Texas funk in it. I could easily imagine Hundred Year Flood having a go at this one. “Yellow Elevator #2” starts out with a bass line right out of The Zombies’ “Time of the Season,” and a cheesy keyboard right out of the B-52’s “Rock Lobster” somehow evolves into a Beatles vibe. The end reminds me of “I Want You (She’s So Heavy) — and all this unfolds in less than three minutes.

What is it with The Angels’ strange obsession with snipers? On their first album, Passover, they had a song called “The Sniper at Heaven’s Gate.” Phosphene Dream ends with a disturbingly happy-sounding little number called “The Sniper.”

“Phosphene” refers to seeing lights when your eyelids are closed. Close your eyes and listen to this album. See where the lights lead you..

* Slovenly Records Sampler 2010 by various artists. Don’t say I never gave ya nothin’. HERE is a link to a free 55-song mp3 sampler of punk, garage, and weird noises from Slovenly Records, a Reno, Nevada, company. The only catch is that you have to sign up for its email list. 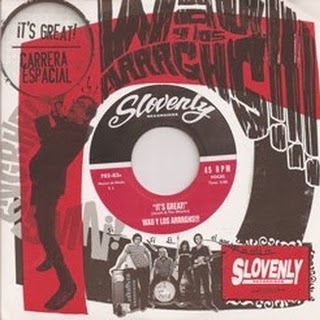 Slovenly’s not very well known as a label, and many of the acts on this sampler are not known at all. But scattered among the artists here are several impressive names from many countries.

From Great Britain there’s Billy Childish and his latest band, Musicians of the British Empire. There are Wau y Los Arrrghs!!! and Hollywood Sinners from Spain and King Automatic, the French one-man garage band. And from these United States are Black Lips and Reigning Sound.

Some of my favorite songs are tracks by bands I had never heard of. There’s a version of the Spider-Man theme (from the old cartoon show) by a Spanish band called Los Pataconas.

Most of the voices you hear on the sampler are male. Among the refreshing exceptions is that of a lady known as “Helene 33” of The Okmoniks, a Tucson band (pictured below.).

Perhaps the catchiest tune here is “Your Love," the offering from Reigning Sound, led by Greg Cartwright, formerly of The Oblivians. If you listen close enough you can hear Motown in this one.

But don’t take my word for it. Hear it yourself. And if you like rpms better than mp3s, most of these are available from Slovenly on vinyl 45s.

Here's The Black Angels on Letterman