A version of this was published in The Santa Fe New Mexican
October 29, 2010

In the weeks preceding Halloween, the average American, according to statistics I just made up, will hear “The Monster Mash” by Bobby “Boris” Pickett 17.3 times.

That novelty hit from 1962 (trivia note: Leon Russell played piano on the record) seems omnipresent, but it’s hardly the only tacky rock ’n’ roll monster song. They’re everywhere — full of shrieks, wolf howls, cackling witch laughs, bad horror puns, and even worse Boris and Bela impersonations — if you know where to look for them.

From personal experience, I can truthfully say that monsters and rock ’n’ roll were two major cultural obsessions of American boys, and probably some girls, who grew up in the early ’60s. So it’s natural that those two realms would cross-pollinate.

Recently, I was reminded of a really stupid horror-rock album I had as a kid. The track that stuck in my memory was called “Frankenstein Meets The Beatles.” I had looked for that online more than a couple of times in past years without any luck. In fact, I was beginning to wonder if the memory was just a hallucination caused by smelling too much airplane glue while putting together plastic models of The Wolfman and The Mummy. 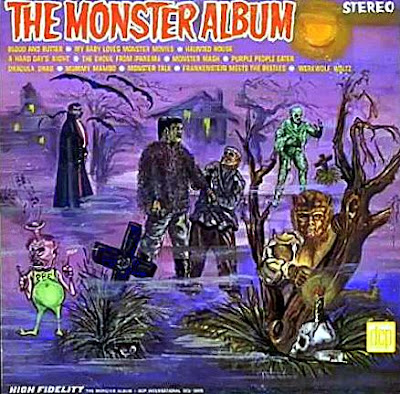 But one midnight dreary, I decided to look again. Lo and behold, I found it. A legal version, even! It was on a record called The Monster Album by none other than Dickie Goodman, most famous for his “break-in” songs, like “The Flying Saucer” and “Mr. Jaws,” set up as newscasts in which the reporter is answered by short samples of current pop hits.

Besides “Frankenstein Meets The Beatles,” the album had songs with such titles as “Ghoul From Ipanema” and “Mambo Mummy.”

A word of caution: While the cover looks the same and that song about The Beatles is there, the version of The Monster Album I found on eMusic and Amazon is not the same album I had in 1965. In fact the only other tune from the original that appears to be on this is “Dracula Drag” (which refers to hot-rod racing, not his manner of dress).

Its recent Halloween posts include “the swingin’est version of the Alfred Hitchcock theme you will ever hear” (by Stanley Wilson & His Orchestra); some videos set to songs from a proto-Elvira from Portland, Oregon, named “Tarantula Ghoul”; and a link to an impressive 60-track collection of spooky instrumentals, spiced up with several audio clips from horror-movie trailers. 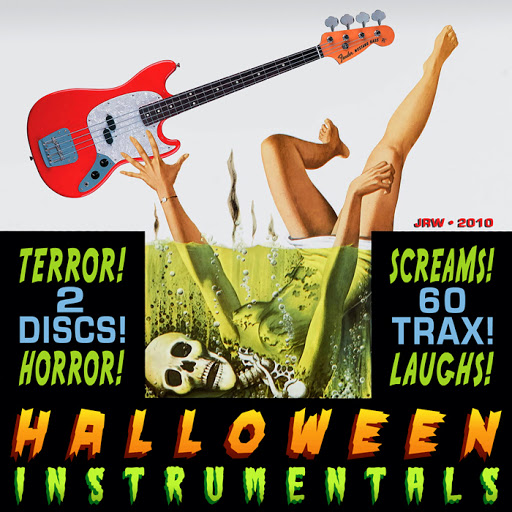 The collection is from J.R. Williams, an Ichiban contributor and comics artist from Oregon who frequently posts links to amazing mp3 compilations on his Flickr page.

Halloween Instrumentals: Ghost Guitars features a fine variety of sounds. There are a few artists you should recognize — The Ventures (“The Bat,” “Fear,” and “He Never Came Back”), Duane Eddy (“The Trembler”), The Champs (most famous for “Tequila,” but here they do Henry Mancini’s “Experiment in Terror”), and Merv Griffin — yes that Merv Griffin — doing a faux-Lugosi intro to a rocking little thriller called “House of Horrors.”

There are also a number of bands I suspect were one-offs — Frankie Stein & His Ghouls, The Gravestone Four, and Tony & The Monstrosities, etc.

While there’s lots of “surf” music and strip-club sax here, this collection also includes moody tremolo twang like “Innersanctum” by Jim Wolfe & The T-Towners, which reminds me of The Viscounts’ “Harlem Nocturne” and even a little funk in “The Exorcist” by The Devils. You can find this collection HERE. But, hurry. Williams frequently removes links to the downloads.

Even more goblin rock is on a blog called Spread the Good Word!. The host, who calls himself Reverend Frost, has 16 compilations of Halloween tunes waiting for you to download. (These aren’t separate tracks like Williams’ compilations. They’re all on hour-long mp3s.) I downloaded the latest.

A favorite here is “Mummy’s Ball” by The Verdicts. Rockabilly ace Ronnie Dawson does his version of “Rockin’ Bones,” later covered by The Cramps. There are also some more recent songs by groups like the Fuzztones (“I’m The Wolfman”) and goth-rockers Alien Sex Fiend (”Now I’m Feeling Zombified”).

And yes, there’s a Dickie Goodman tune from The Monster Album: “My Baby Loves Monster Movies.” 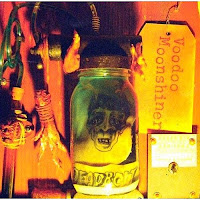 The world’s scariest band: That’s the title claimed by Deadbolt, a San Diego surf/pyschobilly/SpaghettiOs-Western trash-rock combo that’s been around for more than 20 years and makes music perfect for this time of year.

It’s no rock opera, but some of the songs — “Voodoo Moonshine” and “Panic in Georgia” — deal with a strange brew of mountain dew that turns God-fearing hillbillies into flesh-eating zombies.

One of my favorites is “Buy a Gun (Get a Free Guitar).” It’s a song about a possessed pawn-shop guitar that transforms its owner into a great musician — and a crazed killer.

Then there’s “The Mocker,” a series of short skits about a haunted recording studio in which a singer is taunted and trapped by a mysterious ghostly voice.

Warning: this CD is difficult to find. When I last checked, Amazon had one copy. On your mark, get set ...

My own Halloween rock contributions:

My latest Big Enchilada podcast, Spooktacular 2010, is up and ready to creep into your computer. It's RIGHT HERE