A version of this was published in The Santa Fe New Mexican
October 8, 2010

Mavis Staples is in her 70s, and her new album, You Are Not Alone, finds her doing what she’s always done best — blurring the edges of soul, gospel, and pop music. And she sounds as strong as ever doing so.

I’m not saying that lightly. This album is truly powerful, recalling some of her most memorable moments with The Staples Singers back in the ’60s, without sounding nostalgic or self-conscious. 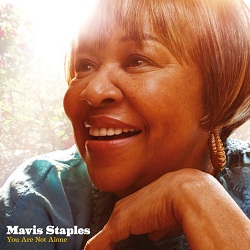 Staples’ fellow Chicagoite Jeff Tweedy of the band Wilco produced this album. And he did as well as, if not better than, Ry Cooder on Staples’ previous studio album, We’ll Never Turn Back (an impressive collection of spirituals and civil rights-era tunes).

To his credit, Tweedy obviously wasn’t interested in making a “Mavis Meets Wilco” record — which, I’ll admit, I feared when first I heard about the partnership. He was just determined to make a good Mavis Staples record. (This is the second excellent album in recent years featuring a soul matron with an alt-country producer. The first was Bettye LaVette’s The Scene of The Crime, which was co-produced by the Drive-By-Truckers’ Patterson Hood in 2007.)

Tweedy is obviously in love with that swampy, tremolo-guitar sound that was the trademark of Mavis’ late dad, “Pops” Staples, back in The Staples Singers days. For the best introduction to this sound, don’t look to the group’s popular hits like “Respect Yourself.” Search out its gospel works. A few years ago, I found a copy of a Staples gospel collection called Uncloudy Day from the ’50s that seriously twisted my head off with Pops’ snaky guitar and those gritty vocals.

Most of my favorite songs on You Are Not Alone feature that guitar sound — provided here by a capable picker named Rick Holmstrom — and that gospel spirit.

There are three of Pops’ tunes here. “Don’t Knock” (which was also on Uncloudy Day) kicks off the record. It’s an upbeat number that does a great job of setting the mood. Another Pops song, “On My Way to Heaven” is part of a medley with a tune called “Too Close,” which closes the album. In between is the old man’s coolest contribution to this record, a hoodoo-dripping cruncher called “Downward Road.” Mavis sings lead while a chorus including Chicago songbirds Kelly Hogan and Nora O’Connor back her up.

There are some fine traditional gospel numbers that are among my favorites. Tony Joe White could have done a great version of “Creep Along Moses” — but I doubt if it would have been as great as the version by Staples and crew. “Wonderful Savior” is sung a cappella by Staples and her backup singers. This one has some truly nasty distorted guitar by Holmstrom.

And then there’s “In Christ There Is No East or West.” This is done as a lilting folk-rocker, an unusual arrangement for this album. But it’s an emotional standout — sweet-spirited, straightforward, and inviting, yet sung with Staples’ aura of knowing experience.

Staples sings several secular numbers written by well-known songwriters. There’s an obscure Randy Newman song called “Losing You,” which is slow, somber, and bluesy — it starts out with “I was a fool with my money, I lost every dime.”

Staples does a Creedence Clearwater Revival tune, John Fogerty’s “Wrote a Song for Everyone,” which, like most of The Staple Singers’ pop hits, sounds like it’s a gospel song without mentioning God, Jesus, or church. Staples goes down to New Orleans for Allen Toussaint’s “Last Train.”

And there are a couple of songs by Tweedy — the title cut and a surprisingly funky track called “Only the Lord Knows.” It’s a song about being confused and mistrustful in the modern world. “Only the Lord knows, and he ain’t you,” goes the refrain.

One of my favorite tunes here is a dandy cover of “We’re Gonna Make It,” a Little Milton soul hit from the ’60s. The lyrics are secular, but they have a poignant message about faith in times of economic hardship: “We’re gonna make it, I know we will.”

What I love about Staples is that she is unswervingly positive and inspirational without ever sounding corny or cloying — righteous, but never self-righteous. I’ve never met the woman, but I imagine she could make you feel better by just being around her. At least that’s how I feel when I listen to her music. 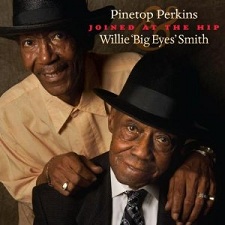 * Joined at the Hip by Pinetop Perkins & Willie “Big Eyes” Smith. Staples may be over 70, but Perkins could call her “young lady.” He’s 97, (no, that’s not a typo!) and Smith is a mere lad of 74. These two blues codgers — who played in Muddy Waters’ band in the 1970s and later together in The Legendary Blues Band — can still boogie.

This record isn’t earth-shattering, but its good basic Chicago blues. Perkins is still playing piano (he was playing at the Thirsty Ear Festival a few years ago), but Smith is no longer beating the drums (his son Kenny is doing that here); he’s singing and playing harp.

Two of my favorite songs here are by the two different Sonny Boy Williamsons. There is a good version of “Eyesight to the Blind” by Sonny Boy II (Rice Miller). And there is “Cut That Out,” a lesser-known song by the lesser-known Sonny Boy, John Lee Williamson.

But the showstopper here is a gospel standard, “Take My Hand, Precious Lord,” written by Thomas A. Dorsey. This version is far bluesier than most of the renditions I’ve heard. But remember, Dorsey started his career as “Georgia Tom,” a blues pianist who backed Tampa Red on songs including “Tight Like That.”

For reasons best known to Perkins, “Precious Lord” ends with a quick “Jingle Bells” piano riff followed by “Shave and a Haircut.”
at October 07, 2010