ALL YOU NEED IS HYPE

We hold patents on a few gadgets we confiscated from the visitors. Velcro, microwave ovens, liposuction. This is a fascinating little gadget. It'll replace CDs soon. Guess I'll have to buy the `White Album' again.


Yes, I liked The Beatles. Yes, they changed my life and made me want to start a band when I was in 5th grade and saw them on The Ed Sullivan Show. Yes, I cried openly when John Lennon was murdered in 1980.

And yes, I re-purchased several of their albums when they came out on CD -- mostly from the used bin -- though I truly believe almost everything you need can be found on Beatles For Sale (which I first knew as Beatles '65), Revolver and the Past Masters compilations. 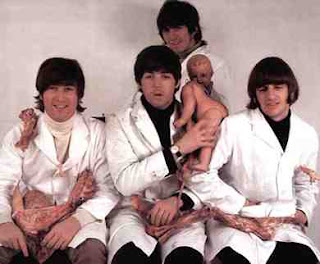 So forgive me if I'm cynical about all the hoopla about the "unforgettable news" that Apple Corps finally reached accord with Apple iTunes and The Beatles catalog is available on iTunes.

Honestly, I was more excited when I stumbled across the MP3 of "Frankenstein Meets the Beatles" a few weeks ago. What did The Clash say about "phony Beatlemania"?

If nothing else you have to give credit ot  EMI or the surviving Beatles and their heirs or whoever for their amazing talent in creating publicity and fresh waves of nostalgia for the simple act of accepting technology that most of us accepted years ago.

They did the same thing 20 years ago when they finally agreed to allow The Beatles music to be sold on CD. The secret is simple: Just drag your feet for a few years and you've got the makings of a prefab Fab Four frenzy. It's an old trick, but when you're selling The Beatles, apparently it always works.

But let's get real. Those of you who own Beatles CDs, haven't you already ripped those albums, or at least your favorite songs from those albums, onto your computer? No matter what the RIAA says, you can do that and put 'em on your iPods too.

So no, Agent K, you don't have to buy 'The White Album' again.

Let's let the witty Beatle put this all in perspective: