How can you not love an album that begins with a slide guitar lick from a guy called “Khorn Sirrup” followed by the line, “Well I ain’t too pretty and I ain’t too bright ...”? 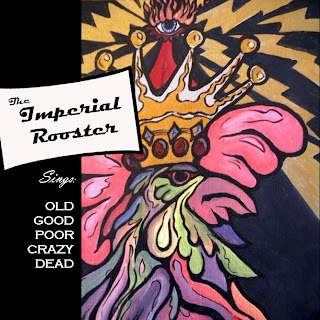 The album is Old Good Poor Crazy Dead, and the band responsible for it is The Imperial Rooster. They’re from Española, and the singer’s right. They ain’t too pretty. From the looks of the band photo on the inside cover of the CD, I’d hate to meet these guys in a dark alley — or even worse, a well-lit alley.

But pretty or not, I can’t get enough of this album.

This is good, rootsy hillbilly slop. I don’t hear a jug in the mix, but The Imperial Rooster has a real jug-band spirit — on top of a punk-rock soul. The band members’ funny monikers — such as “Nat King Kong,” “Cootie LeRoux,” and “Dusty Vinyl” — create a mythological musical world somewhere along an astral plane between Dogpatch and Española.

The first song, “Your Friends Think I’m the Devil,” has a melody similar to an old tune called “Wild About My Lovin’ ” (a traditional song covered most famously by The Lovin’ Spoonful). It is a serious, self-loathing blues song. “Well, I try to be a good man, try to do what’s right / But Betty Sue done told me that I’m a parasite.”

The song that first drew me to the Rooster was “Pig Fork.” The title should remind you of “Too Much Pork for Just One Fork” by Southern Culture on the Skids. But this tune, punctuated by frightening hog squeals and embellished with a chorus of “yeah yeah yeah” whenever the singer says “pig fork,” achieves its own level of lunacy. “Well, I keep it in my pocket right next to my thigh / If you get too close you get poked in the eye / Stick it in a socket you get electrified / I like my pork cracklins deep fried.”

They’ve even got an eight-minute minor-key epic here. “Advice of the Ages” starts off slow and spooky, led by the upright bass of “Tennessee Skilly McGee.” A lengthy instrumental starts to sound like Symphony Sid Page’s solo ins. But instead of a violin, the dominant instrument on the Rooster song is a kazoo. (“Pilgrum Hart” later comes in on the fiddle.)

Other new CDs from this enchanted land:

*  Wheel of Life by Boris McCutcheon & The Salt Licks. Here’s the latest collection of melodic celebrations from the Massachusetts-born singer-songwriter and his capable, underrated band. Wheel is McCutcheon’s third album with The Salt Licks. While I still prefer the first, 2005’s Cactusman vs. the Blue Demon, the new one has some real delights. My favorites here are the ones in which he cuts loose with honky-tonk abandon. The first song on this album (“What Ails You?”) grabs you right from the beginning with its Johnny Cash chunka-chunka beat. That’s Susan Hyde Holmes on upright bass and Brett Davis on twang guitar and lap steel.

Also notable is country-funk charmer “Boxspring Plough.” Judging from this and Tom Waits’ “Filipino Box Spring Hog,” one can only conclude that songs with “box spring” in the title are fun. This one starts out with McCutcheon singing about the annual “hippies vs. the locals” baseball game up near Picuris Pueblo. Then there’s “Peeler,” which McCutcheon, on his website, says is about “a young man who falls madly and foolishly in love with a new age stripper.”

Though McCutcheon is known mostly as a songwriter, on Wheel of Life he includes three songs written by others. There’s a decent version of Townes Van Zandt’s “No Place to Fall” and a fun take on “Lee Harvey,” a tune written by Homer Henderson but best known for The Asylum Street Spankers’ version. It’s about a guy who apparently was involved in some kind of kerfuffle in Dallas back in the early 1960s. Despite its unnecessarily slanderous lyrics about a Texas businessman named Jack Ruby, it’s a fun song, and McCutcheon does it justice.

And once again McCutcheon teams up with Albuquerque songwriter Mark Ray Lewis from the band Trilobite. On Cactusman, McCutcheon covered Lewis’ spooky “Caves of Burgundy.” Here he does a Lewis tune called “Mark Twain.” It’s not about the author. It’s a compelling tale about a fateful romance with a farmer’s daughter and a trip into the unforeseen.

The album ends with a jaunty little backroads journey called “Bad Road, Good People,” which is also the title of his previous album. Here he sings about his Northern New Mexico home, which apparently is “a good place to burn a car or shoot an old washer or dryer.” 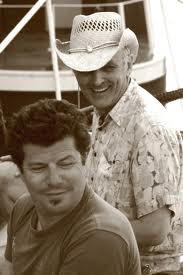 The first 10 tracks in this collection are new recordings. But also here is The Whateverly Brothers’ entire first album, Global Toast, which was recorded in Denmark in 2001.

The music is simple and underproduced — in my book, a good thing. Mainly just two guys and their guitars. (Was that a dog I heard yip in “Warm Love”?)

The Whateverly Brothers make a rare Santa Fe area appearance at 7 p.m. on Sunday, Nov. 28, at Mike’s Music Exchange in La Tienda shopping center in Eldorado. The suggested donation (come on, pay it, ya cheapskates!) is $15.
at November 25, 2010