A version of this was published in The Santa Fe New Mexican
November 5, 2010

Kill City is hardly Iggy Pop’s greatest album — not by a long shot. But this relatively obscure record, rereleased in October and credited to Iggy and his collaborator James Williamson, has a brand new mix and represents a point at which Iggy was desperately clawing his way out of the abyss. 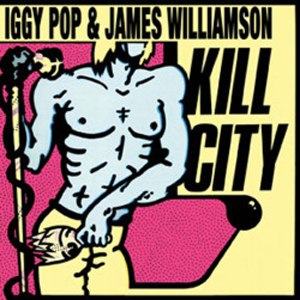 Few bands in the history of the known universe disintegrated as spectacularly as The Stooges did.

The story’s been told a jillion times — how, following the release of the David Bowie-produced Raw Power, the drugs, music-industry frustrations, internal conflicts, and the craziness of life on the road caught up with the band, which went down in a blaze of inglorious glory, as documented on the live album/crime-scene document Metallic K.O.

In the immediate aftermath of The Stooges, Iggy Pop ended up in a Los Angeles mental hospital, the Neuropsychiatric Institute in Westwood. There, according to his 2007 biography Iggy Pop: Open Up and Bleed by Paul Trynka, he was diagnosed with “hypomania, a bipolar disorder characterized by episodes of euphoric or overexcited and irrational behavior succeeded by depression.”

However, Trynka points out that Iggy’s doctor now says this diagnosis, which reads like a review of a mid-’70s Stooges show, might not be accurate. Iggy’s mental problems back then might have just been a temporary condition brought on by all the drugs.

Whatever the case, in 1975 Iggy was at a low point. He was in the funny farm, his career was in shambles, and most of his bridges were burned. But not all of them.

Before checking into the hospital, Iggy had been hanging out and writing songs with Williamson, who had been the lead guitarist in the Raw Power-era Stooges. Williamson arranged for some recording sessions at the home studio of Jimmy Webb — yes, the man who wrote “MacArthur Park” and “By the Time I Get to Phoenix.” Webb’s brother Gary engineered the recordings. According to Open Up and Bleed, Webb’s buddy Art Garfunkel showed up to the studio one night and watched one of the sessions.

Now there’s a Marvel Team-Up for you: Iggy & Garfunkel.

According to Ben Edmonds, a former Creem editor who was involved with the project, Iggy wanted to maintain the spirit of The Stooges, “but show people The Stooges could make something that resembled music.”

But by 1975 very few in the music industry were interested. Remember the state of the music industry at this point. True, The New York Dolls were making some noise on the East Coast and Patti Smith was riding her Horses to weird unimaginable places. But most of the “rock” you heard on the radio at the time was happy, poppy California soft-rock sounds like those of Fleetwood Mac and The Steve Miller Band.

Who wanted to hear some junkie mental patient bellowing harsh and ugly craziness like, “I live here in Kill City where the debris meets the sea/It’s a playground to the rich, but it’s a loaded gun to me. ... The scene is fascination man and everything’s for free/Until you wind up in some bathroom overdosed and on your knees ...”

So Kill City was shelved for two years. In the meantime, Iggy persevered and, with the help of his pal Bowie, achieved his big comeback with The Idiot and Lust for Life, both released in 1977. It was only after this that the independent Bomp Records released Kill City — on green-colored vinyl. The sound was terrible — “muddy” being an adjective frequently applied to it. That problem, after more than 30 years, has finally largely been solved on the new version through the magic of modern technology.

But still, Kill City doesn’t have the punch, the raw power of Raw Power — much less the fun of Funhouse. A lot of it is dark and pensive, perhaps a harbinger of the introspective moodiness of The Idiot. Garfunkel would have fit in on the mellow “No Sense of Crime.” 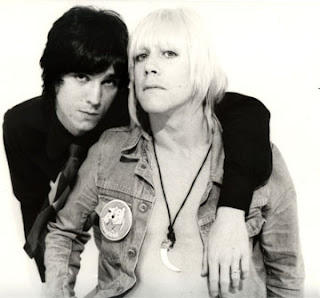 But there’s some inspired Stoogey craziness here. “Johanna” is a rocker The Stooges had performed. Here, it’s driven by John Harden’s sax madness. “I’ve been a dreamer, I’ve been a screamer,” Iggy shouts. And even better is the title cut, which is charged with Williamson’s stinging guitar and a chorus of “Give it up, turn the boy loose.” And Iggy proves he’s still a menace, declaring “I’m sick of keeping quiet and I am the wild boy/But if I have to die here, first I’m gonna make some noise.”

“I Got Nothin’,” another final-daze Stooges tune, is an angry cry of defiance from someone at the bottom. I think my favorite here, though, is “Lucky Monkeys.” It’s a put-down of L.A. scenesters trying to look like Bowie and be “as sick as Mick.” It starts off slow, like a lion sizing up a stray zebra. But then Iggy takes aim at himself and ends by shouting, “I was born dead in prison, in prison born dead.”

While this isn’t an essential effort, fans of The Stooges and or Mr. Pop shouldn’t pass it by.
at November 04, 2010