A version of this was published in The Santa Fe New Mexican
November 19, 2010

It has been five years since Martí Brom released an album (Martí Brom Sings Heartache Numbers). This was about the time she and her family moved from Austin, Texas, to Washington, D.C. I was worried Brom might have hung it up. 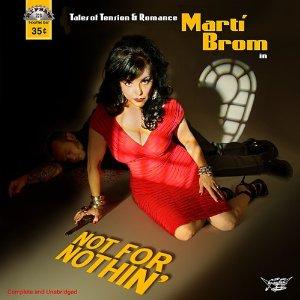 So seeing her new CD, Not for Nothin’, was a true sight for sore eyes — in more ways than one. The artwork, based on old detective-story pulp magazine covers, is one of the sexiest album covers I’ve seen lately. Trouble ahead, lady in red!

Brom makes sweet, rockabilly-informed, R & B-influenced retro country. Her voice has been compared to that of Patsy Cline. (Think Cline during her mid-1950s rockabilly flirtation, such as her tune “Stop, Look and Listen.”) But back during her teenage years, Brom’s main musical turn-on was proto-punker Suzi Quatro.

And one of the first times she played before an audience was when her husband, Bob, a career Air Force officer, convinced her to audition for an officers’ wives club musical called The 1940s Radio Hour, for which she sang “Blues in the Night.”

(Another cool tidbit about Brom: she allegedly named her daughter Ivy, now 20, after The Cramps’ Poison Ivy.)

Not for Nothin’ (subtitled Tales of Tension & Romance) is Brom’s tribute to singers, musicians and songwriters from the Washington, D.C., area. Fortunately, none of the songs have anything to do with government or politics. And even more fortunately, the album shows Brom in top form, despite her five-year absence from recording.

The first song is a fun little hopped-up bopper called “Finders Keepers” by Wynona Carr, a singer best known for her gospel songs though she later turned to R & B. Brom’s high-charged version is driven by a screaming sax.

“Mascara Tears” is a honky-tonk weeper written by Artie Hill, a fine performer in his own right. Backed by steel guitar and fiddle, Hill makes it weep.

One of the standout songs is one made famous by Elvis Presley: “A Fool Such as I.” The song, done here as a country shuffle, is a perfect vehicle for Brom’s voice. Elvis would be proud.

She teams up with D.C. picker/singer Bill Kirchen on “Sweet Thang.” It’s a delight, but also seek out the 1967 version by Ernest Tubb and Loretta Lynn.

Not For Nothin’ is full of spunk and heartache. It’s great to have Brom back.

*  Tex-O-Billy by Suzette & The Neon Angels. Tejana almost became a dirty word during the recent gubernatorial campaign in New Mexico. 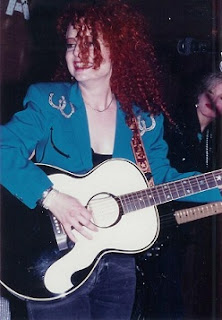 So maybe I should clarify that when Suzette Lawrence sings, “Yo Soy Tejana (I’m a Texas Girl),” I don’t think her purpose is to steal New Mexico’s water from working families. This song is a stomping rocker with some crazy slide and a melody similar to Terry Allen’s “Amarillo Highway.”

Lawrence left Texas for Los Angeles in the early 1990s. There she became a fixture at the Palomino Club and fell in with the “Town South of Bakersfield” crowd (her picture appears on the cover of the third volume of the album series of that name) along with the likes m Lauderdale, Rosie Flores, and James Intveld.

But good bluesy roadhouse roots-rock is Lawrence’s foundation. When she sings “Tear Up the Honkytonk,”  her fervor makes you take the threat seriously. And when she sings “Go Girl Go,” it’s tempting to shout along with her. 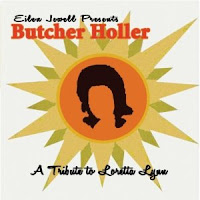 *  Eilen Jewell Presents Butcher Holler: A Tribute to Loretta Lynn. Jewell’s voice doesn’t really sound much like Lynn’s blue Kentucky drawl. And to her credit, she doesn’t try to imitate Lynn. But like any real country fan, Jewell clearly admires Lynn’s songs. Aided with an able country band and her unaffected alto, she does them justice in her own style on this appealing tribute.

She includes several of Lynn’s best-known songs: “You Ain’t Woman Enough (To Take My Man),” “Don’t Come Home a Drinkin’ With Lovin’ on Your Mind),” “Fist City,” and “I’m a Honky Tonk Girl.” But she also does several lesser-known gems from the Lynn songbook.

There’s the defiantly religious “Who Says God Is Dead,” as well as the sweet adultery odes “A Man I Hardly Know” and “Another Man Loved Me Last Night.” And I had never heard the original “Deep as Your Pocket,” a song about a gold digger (“Her love for you is as deep as your pocket”).

Local alert: Born in Idaho and now living in Boston, Jewell, according to several sources, lived in Santa Fe around the turn of the most recent century, attending St. John’s College. Apparently she used to play at the farmers market. I couldn’t find her anywhere in The New Mexican’s computer archives. Anyone remember her?
at November 18, 2010