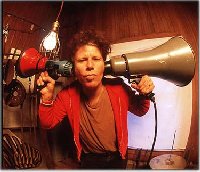 Let's be thankful for Tom Waits and the Preservation Hall Jazz Band from New Orleans. They've teamed up to produce a couple of songs that recently were released on a 78 rpm record.

The songs are “Tootie Ma Was A Big Fine Thing” and “Corrine Died On The Battlefield,” both recorded originally by a guy named Danny Barker in 1947.

They only pressed 504 hand-numbered copies to raise money for Preservation Hall and its outreach programs. The first 100 will be accompanied by a special Preservation Hall 78rpm record player (which also plays albums and 45s.) That special package will cost you $200. The record alone is a mere $50.

To be honest, I'm not sure if I'll be buying this. I can't afford the $200 and I don't know whether my iPod even plays 78s. (Actually Waits' songs are on a benefit CD released early this year including Merle Haggard, Richie Havens, Dr. John, Buddy Miller and many more.)

Here's one of those songs, below. (Thanks to Liisa for the tip.)