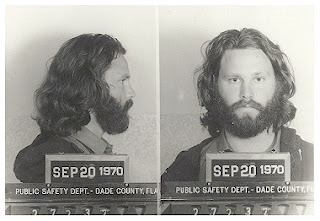 Here in New Mexico we still don't know what Gov. Bill Richardson is going to do with Billy the Kid, but down in Florida outgoing Gov. Charlie Crist today pardoned Jim Morrison for his 1969 (settle down, Beavis) indecent-exposure conviction.

TALLAHASSEE, Fla. – This is the end for 40-year-old convictions that left Jim Morrison marked with what today would be considered sex-offender status. Florida's Clemency Board, egged on by departing Gov. Charlie Crist, pardoned The Doors' long-dead singer Thursday on indecent exposure and profanity charges stemming from a wild concert.


Some people who were at the Miami show March 1, 1969, insist even today that he exposed himself, though others in the audience and Morrison's bandmates contend he was just teasing the crowd and only pretended to do the deed. Crist, tuned in to the controversy by a Doors fan, said there was enough doubt about what happened at the Dinner Key Auditorium to justify a pardon.


The board, which consists of Crist and a three-member Cabinet, voted unanimously to pardon Morrison as they granted several other pardons Thursday. At the hearing, the governor called the convictions a "blot" on the record of an accomplished artist for "something he may or may not have done." 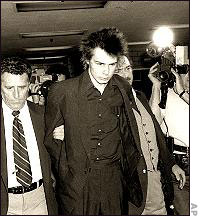 Jackie Gleason, who organized a "Rally for Decency" prompted by the Morrison arrest, couldn't be reached for comment. Like Morrison, he's dead.

So now that this issue is done with, how about a "Pardon Sid Vicious" movement?
at December 09, 2010