The Mysterious Case of Jim Sullivan 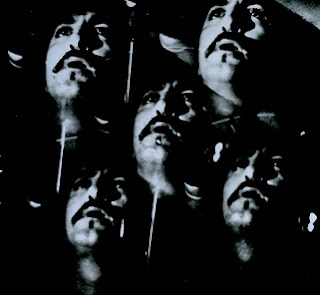 Thanks to Tom Adler for telling me about this strange little story about a musician who was last seen 35 years ago in Santa Rosa, N.M.

The story of Jim Sullivan aired on NPR Thursday. He was a singer-songwriter (whose music, honestly, isn't the type of stuff I like). He had a bit part in Easy Rider, (the commune scene, according to his sister.) By early 1975 he'd decided to leave Los Angeles to try his luck in the Nashville music game.

Sullivan recorded an album called UFO  for a small label on which some top-notch L.A. studio cats -- members of The Wrecking Crew -- played. The title song of the album has caused some of his more mystical fans to speculate that perhaps his disappearance is connected to beings from beyond.

Matt Sullivan, no relation to Jim, is owner of the Light in the Attic record company, which last month re-released UFO. In the Aquarium Drunkard blog he wrote a lengthy piece about the singer after traveling to California and to Santa Rosa seeking clues about Jim Sullivan. Jim left Los Angeles in his Volkswagen Bug sometime between noon and 1 p.m. on March 4. In the early morning hours of March 5, he was pulled over outside Santa Rosa for swerving. He was taken to the local police station for a sobriety test, which he passed. He was swerving from fatigue caused by the taxing 15-hour drive. Jim checked into the La Mesa Motel, but police reports later indicated that the bed in his room was not slept in, and the key was found locked inside the room.


We know that after he checked into the La Mesa, Jim stopped by the liquor store, bought some vodka, and drove around town. Somehow he ended up at this ranch. ... When the police found Jim’s car it was locked and the engine was dead. A number of things were found in the car, including Jim’s wallet, guitar, clothes, reel-to-reel tapes, cassettes, silver appointment book, and a box of LP’s of Jim’s 1972 self-titled album on the Playboy label.

(Weird little bit of synchronicity: I don't know Sprengelmeyer personally, but he and I have mutual friends, and one of them is named Sullivan -- my former New Mexican colleague T.J. Sullivan. I don't think he's related to Jim or Matt Sullivan.)


For more than two years, search parties were regularly convened by a number of agencies – the New Mexico State Police, Santa Rosa police, and a number of volunteer groups.


What happened to Jim Sullivan probably never will be known. Just another bizarre unsolved case from New Mexico.