TERRELL'S TUNEUP: SONGS FOR THE SEASON

A version of this was published in The Santa Fe New Mexican
December 17, 2010

Ten years ago this week, I wrote in this column a list of my Top 10 favorite Christmas songs, which may have been based on a previous version that was published about a decade before that.

Everyone’s tastes change a little through the years, but looking over that list, I’ll stand by those selections. I still play those songs at home and on my radio shows every year.

But there is lots of great Christmas music out there. So here’s a new list of my favorite Christmas songs that I cherish almost as much as the ones on the old list. 1. “Santa Doesn’t Cop Out on Dope” by Sonic Youth. The band made up of Thurston Moore, Kim Gordon, Lee Ranaldo, and Steve Shelley has never been known for its humor. So it’s not going out on much of a limb to declare that this is hands down the funniest song they ever recorded. It’s a Martin Mull tune, originally recorded by the singer-comic in the mid-’70s as a parody of smug moralists trying to use “hep lingo” to rap to the youth about drugs and such. Sonic Youth adds a few layers of absurdism, not to mention crazy noise.

2. “All For Gloria” by Elastica. This is a rock ’n’ roll reimagining of “Gloria in Excelsis Deo” by a predominantly female band that burned out way too quickly in the ’90s. The recording is from a John Peel BBC Christmas show, which ended up on an album called Elastica: The Radio One Sessions. But I bet most American fans first heard it on Just Say Noël (on which it was called “Gloria”) — the same 1996 Geffen Christmas collection that featured the Sonic Youth song mentioned above. On Radio One, Elastica also does a pretty cool version of “We Three Kings” called “I Wanna Be a King of Orient Aah.”

3. “Must Be Santa” by Brave Combo. Bob Dylan took Combo’s crazy pumped-up polka arrangement of this old kiddie song for his Christmas album last year (and made a hilarious video that was an internet sensation). I like the original better.

4. “White Christmas” by Otis Redding. Nobody should have even attempted to sing this Christmas chestnut after Redding worked it over. Like he did with practically everything he ever recorded, the man just sang his guts out.

5. “Eggnog” by The Rockin’ Guys. The Guys are a punk band from Conway, Arkansas, which I never would have discovered except for the goodwill of a former colleague who’s an Arkie expat. The song is a tender reminiscence of the singer’s “poor old peg-leg pappy” and how the family would get together at Christmas and “decorate his stump.”

6. “Blue Christmas Lights” by Chris Hillman & Herb Pedersen. Buck Owens co-wrote and recorded this sad Yuletide honky-tonker. But Hillman & Pedersen, who covered it in the ’90s, make it haunting with their harmonies. 7. “Christmas in the Trenches” by John McCutcheon. This is a touching ballad about the famous 1914 Christmas truce during World War I. British and German troops spontaneously laid down their arms to sings carols and celebrate the holiday before getting back to the serious work of killing one another the next day.

8. “Can Man Christmas” by Joe West with Mike “The Can Man” Burney. Burney — who collects aluminum cans around the Lone Butte area for recycling — narrates a couple of anecdotes involving his Santa Claus suit as West and his band play a slow, sad melody.

9. “Star of Wonder” by The Roches. Unaccompanied, sisters Maggie, Suzzy, and Terre sing otherwordly harmonies on this tune written by Terre.

10. “Christmas Boogie” by Canned Heat with Alvin & The Chipmunks. Yes, a melding of two great bands. Guitarist Henry “The Sunflower” Vestine is amazing, even in a weird novelty like this. And Bobby “The Bear” Hite learns not to call chipmunks “mice.”


In the spirit of Christmas recycling, here’s my December 2000 Christmas Top 10.

1. “Little Drummer Boy” by Joan Jett and the Blackhearts. Jett wasn’t the first rocker to do this song. Remember David Bowie’s duet with Bing Crosby? I don’t think Der Bingle would have attempted this version.

2. “Merry Christmas From the Family” by Robert Earl Keen. A lovable if somewhat dysfunctional family — with all its addictions, prejudices, and stepchildren — sits down for a hilarious Yuletide feast.

3. “Fairytale of New York” by The Pogues with Kirsty MacColl. A saga of a love gone wrong: a boozy Irish immigrant lands in the drunk tank, haunted by the curses of his fed-up wife (“Merry Christmas, my ass. I pray God its our last!”) and the carols of a police choir.

4. “We Three Kings of Orient Are” by The Beach Boys. The Beach Boys’ Christmas Album, recorded in the early 1960s, contains some raw dreck, but the boys’ trademark harmonies on this tune are near-mystical.

5. “Old Toy Trains” by Roger Miller. This song, written for his son Dean, who was a toddler at the time, is a rare public glimpse of Miller’s sweet side.

7. “Father Christmas” by The Kinks. Santa, bring me some class warfare!

8. “Santa Can’t Stay” by Dwight Yoakam. On one level this tune is hilarious: a drunken father dons a Santa suit and barges in on Mama and her new beau as the mystified children look on. But any divorced guy who can remember his first Christmas after the split-up can’t help but feel pangs of horror listening to this.

9. “Merry Christmas Baby” by Elvis Presley. “Blue Christmas” is much better known, but this is Elvis at his bluesy best.

10. “The Chipmunk Song” by David Seville and The Chipmunks. Dang, I can actually remember when this first came out one Christmas season in the late 1950s. It was the very first single by Alvin and his brothers, and it has a certain youthful innocence lacking in the group’s later work. After all, this was when The Chipmunks were young and hungry — before they sold out.

Blog Bonus: Here's three short reviews of recent Christmas music I reviewed for Pasatiempo which have been published, or will be published this month. 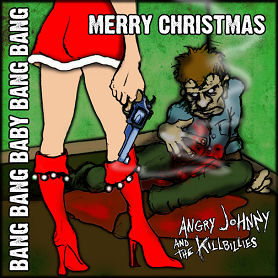 From the darkest backwoods of Massachusetts comes Angry Johnny with a sleighfull of songs about all those things that make Christmas the most wonderful time of the year — Santa Claus, drinking, snow, depression, shopping, gunplay, jingle bells and homicide.

In other words, all the elements of a good Angry Johnny album — plus all the Christmas wrappings.
Killbilly cultists have known for a long time that the Angry one had a soft spot for the holidays. Several years ago he released a free MP3 on his Web site of a song called “Six Bullets For Christmas.” That classic is included on this album.

The basic theme of “Six Bullets” — killing a loved on Christmas Day as payment for infidelity — is revisited here on the title song. But this time there’s a twist, a happy ending of sorts, at least for most of the characters involved.

Of course, Christmas is for the children. Therefore it’s appropriate that the opening tune, “Shootin’ Snowmen” is about innocent, if dangerous youthful Yuletide tradition. “Christmas carol from both barrels and the snowman is history ...”

With songs like “Slaughter in a Winter Wonderland” and “Santa Gets His,” this album is not for the squeamish. But for those who get tired of holiday fluff, this is more fun than swatting a sugarplum fairy. 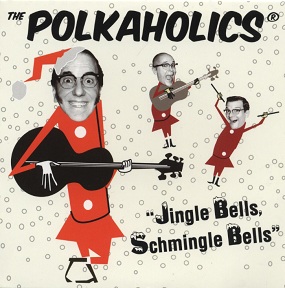 It’s Christmas time in Crazytown and who better to provide the soundtrack than that polka-powerpunk trio,The Polkaholics. No, this isn’t your grandfathers polka band. No accordions, no tubas. Dandy Don Hedeker, Jolly James Wallace and Stylin’ Steve Glover play frenzied guitar rock with a hopped-up oom-pah-pah beat.

With this 7-song EP, the boys infuse some holiday classics with polka culture, adding references to beer, kishka, Old Spice, sauerkraut, kielbasa and more beer. Thus we have “Yakov the Polka Reindeer” (guess why his nose is so shiny), “White Christmas” redone as “Polka Christmas” and, instead of “Jingle Bells,” The Polkaholics sing “Sausage Balls.”

And if the genre-blending isn’t enough with the polka, punk and Christmas music, “The Polkaholics Are Comin’ to Town” starts off as a surf rocker. There are other musical non sequiturs, such as the guitar riff from “Day Tripper” opening the song “Drinkin’ With Santa.” And “In Excelsis Polka” is a wild polkafied mash-up of Bach, Van Morrison, Patti Smith and — for reasons I’m still trying to understand, “Sympathy for The Devil.”

The entire EP is only 20 minutes long. But dancing to it provides quite an aerobic work-off — the better to work off all that beer and sausage.

Good news! You can download all seven songs for free until Dec. 31 RIGHT HERE!. 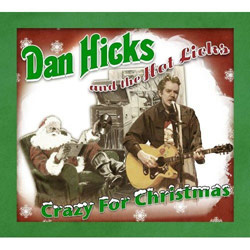 Old smoothie Dan Hicks has been Christmas music for decades. He’s part of the San Francisco-based Christmas Jug, whose song “Somebody Stole My Santa Suit” appeared on Rhino Records’ wonderful Bummed Out Christmas compilation CD back in 1989. He re-recorded that one, a reimagining of “Somebody Stole My Gal” for this album, though jug fans probably will prefer the original.

Longtime Hicks fans will have a flash of familiarity when they hear the first song, “Christmas Mornin’” on this album. It doesn’t become obvious until he starts singing, but it’s a funny re-write of an already funny Hicks standard, “Where’s the Money?”

And there’s some covers of Christmas classics here — “Here Comes Santa Claus,” “I Saw Mommy Kissin’ Santa Claus,” Chuck Berry’s “Run Run Rudolf” — done in the acoustic swinging Hot Licks style. My favorites of these are is “Carol of the Bells” sung scat style by Hicks and his Lickettes (The kazoos sound pretty snazzy here too) and “Cool Yule,” a song written by Steve Allen and made famous by Louis Armstrong.