A version of this was published in The Santa Fe New Mexican
December 31 , 2010 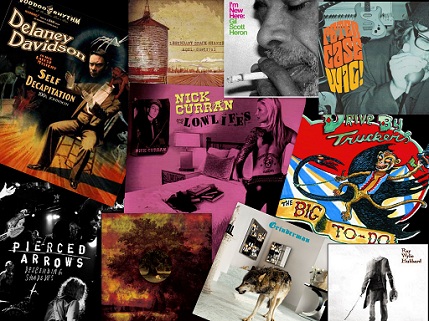 * Reform School Girl by Nick Curran & The Lowlifes. Curran plays some of the roughest, rawest R & B/rockabilly being made today, with raspy voice, banging piano, wailing sax, and a guitar that sounds as if Chuck Berry used it in voodoo rituals. It should remind you of that era when crazed DJs unleashed their sinister communist plot of corrupting America’s youth by playing wild, primitive sounds oozing with sex and rebellion.


* Agri-dustrial by Legendary Shack Shakers. The title is a pretty apt description of the basic Shack Shakers sound. It’s rootsy but with a hard-rocking edge. Singer and frontman J.D. Wilkes plays a mean harmonica and occasional banjo and jew’s-harp, while co-conspirator Duane Denison, formerly of punk-noise patriarchs The Jesus Lizard, makes some crazy noise on his guitar. The rhythm section is grounded in metal as well as in cowpunk. This might be considered a concept album about the South. Or maybe it’s a collection of horror stories, with song titles like “Two Tickets to Hell,” “The Hills of Hell,” and “God Fearing People.”

* Grinderman 2 by Grinderman. The first album by Nick Cave’s Grinderman is an intense burst of bile, anxiety, rage, obscenity, and loud, sloppy rock ’n’ roll. This year’s follow-up, while slightly less ragged than the original, is almost as good. On “Mickey Mouse and the Goodbye Man, “ Cave howls like Howlin’ Wolf on “Smokestack Lightning.” You can hear echoes of Patti Smith’s “Gloria” and The Doors’ “When the Music’s Over,” as well as an intentional nod to blues belter Lucille Bogan’s “Shave ’Em Dry.” “Worm Tamer” — full of fun innuendo and double-entendre — rocks even harder, with a mutated Bo-Diddley-conquers-the-Martians beat. “Super Heathen Child” takes us right to a nightmare world. A girl is “sitting in the bathtub sucking her thumb,” though she’s fully armed as she waits for the Wolf Man.

* Wig! by Peter Case. Case is so good in his acoustic troubadour role that many of his listeners might not even realize that he’s also an accomplished rocker. In the late ’70s and early ’80s, he was the frontman for The Plimsouls and, before that, The Nerves. Now, aided by guitarist Ron Franklin and D.J. Bonebrake, the drummer for X, Case recorded a bunch of blues-soaked, swampy rockers for this album. And it’s some of the toughest music he’s ever made.

* I’m New Here by Gil Scott-Heron. Produced by Richard Russell, this album, Scott-Heron’s first in 16 years, is harrowing. It’s mostly low-key and somber and almost like an encounter in a dark alley with a ghost. The album kicks off with a sweet memory of being raised by his grandmother. But at the end of the song, his granny dies “and I was scared and hurt and shocked,” Scott-Heron says. And then the music gets louder, the beat turns harsher, and suddenly the singer finds himself in an electronic mutation of one of Robert Johnson’s most frightening blues, “Me and the Devil.” Scott-Heron drifts from nightmare to revelry and back again. In “New York Is Killing Me,” he sings a blues melody over persistent hand claps and a clacking rhythm, punctuated by bass drum. A gospel choir comes in a couple of times but disappears like a dream figment. The album is less than 30 minutes long. But it’s one intense half hour.

* Self Decapitation by Delaney Davidson. Traces of Salvation Army marching bands and dark blues permeate this New Zealand native’s album. You can hear influences of American blues, early jazz, and Eastern European/Gypsy sounds. Davidson performs “In the Pines” as an industrial-edged blues tune with an acoustic guitar and altered vocals yielding to over-amped guitar and crazy-loud drums. But my favorite is the delightfully filthy “Dirty Dozen,” a foul-mouthed country-blues stomp that reminds me why I love music in the first place.

* A. Enlightenment, B. Endarkenment (Hint: There Is No C) by Ray Wylie Hubbard. As with other recent Hubbard efforts, this record features a minimalist bluesy sound. There are lots of slide guitar, fierce but simple drums, and lyrics concerning sin and salvation — but little else. Some songs have echoes of bluegrass, with mandolin, banjo, and fiddle occasionally emerging from the primordial blues bog.

* The Big To-Do by Drive-By Truckers. This is the DBT’s best album since 2004’s The Dirty South. It’s full of sex, crime, humor, strippers, circus acts, and girlfriends who say, “I’m too pretty to work and you’re uglying up my house.” All that and loud, loud guitars. Unfortunately, the only mediocre song on the album is one titled “Santa Fe.”

*A Poison Tree by Movie Star Junkies. Images of murder, torture, and betrayal color the lyrics of this album, which features dark but melodic tunes colored by with spaghetti-Western guitars over Farfisa organ and drums that evoke marching bands. The Junkies proudly cite The Birthday Party as an influence, and sure enough, you can hear echoes of early Nick Cave. The last song, a seven-minute epic called “All Winter Long,” ends in a dense instrumental with fuzzy guitar licks that bring back memories of The Electric Prunes.

* Descending Shadows by Pierced Arrows. Back with his previous band Dead Moon, singer Fred Cole bragged that he’s “been screaming at the top of my lungs since 1965.” That’s true — he was in a band called The Lollipop Shoppe that produced a garage-band classic “You Must Be a Witch.” The good news for Dead Moon fans is that Pierced Arrows sounds like a continuation of Moon’s basic guitar/bass/drums sound. Fred Cole and wife/bassist Toody Cole still sound wild and ferocious.

Honorable Mention:
* You Are Not Alone by Mavis Staples
* Wake Up the Snakes by Johnny Dowd
* $ by Mark Sultan
* The Wages by The Reverend Peyton’s Big Damn Band
* Phosphene Dream by The Black Angels
at December 30, 2010