A version of this was published in The Santa Fe New Mexican
December 3, 2010

From the days of Motown, through the proto-punk era of the MC5, going into the garage-rock ’90s with The Gories and The Detroit Cobras, and culminating commercially with The White Stripes, the city of Detroit has been a dependable breeding ground for rock ’n’ roll. 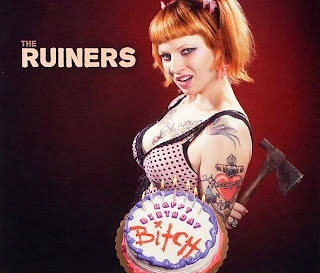 A band called The Ruiners does nothing to ruin the reputation of the Motor City. In fact, the group’s new album, Happy Birthday Bitch, fits into the city’s proud tradition.

Fronted by Rick Ruiner, aka Rick Lappin (a recent feature in the Detroit Press referred to him as the group’s “singer/stuntman”) and Russian-born singer Nina Friday (that’s her on the cover), the band has a reputation for “setting things on fire, stripping down onstage, and occasionally winding up behind bars” (That’s from Chicago music critic Jim DeRogatis.)

“Sugar Buzz” is a sweet crunching ode to a young lady enjoying treats at Dairy Queen, while “Suburban Cop” is a high-charged, hopped-up insult to law enforcement (“Hey, cop, congratulations, you just found my crotch!”).

If The Ruiners were better known, politicians across the country would be calling for their heads.

And while it’s a fine little rock ’n’ roll tune, do yourself a favor, guys, and don’t play the title song for your wife or sweetheart on her birthday.

* The Scrams. One day last year, I was listening to a show by a fellow GaragePunk podcaster (RadiOblivion’s Michael Kaiser, who lives in Tennessee), and he announced a fun, rocking, heavy-on-the-Farfisa band called The Scrams from “Steve Terrell’s backyard in New Mexico.” 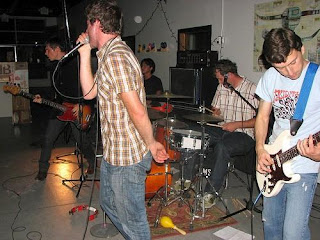 I went out and checked — they weren’t there. He was lying.

But later I found out that The Scrams were only some 60 miles away, in Albuquerque. Just recently The Scrams released a full-length, self titled album that fulfills the promise of the songs on the first 7-inch EP they released last year.

They’ve only been around for less than two years, and they call their sound “warehouse rock.” Started by guitarist Juan Carlos Rodriguez and drummer Nate Daly, other Scrams include singer Joseph Cardillo, Farfisa-nut Daniel Eiland, and bassist Matthew Vanek.

All tracks, from the opening shout of “1,2,3,4,” on “Exiles” to the weird sonic blast that follows “Cry, Cry Cry (In the U.S.A.)” — it sounds like backward masking — is raw garage joy. The first tune that grabbed me was “La Llorona,” a song about a local girl. She murdered her children and is now doomed to eternally wandering the arroyos as a wailing ghost. The Scrams pay her spooky justice.

There’s a song called “Chimp Necropsy,” which may or may not be about those poor medical-experiment chimps in Alamogordo. I can’t make out the lyrics here to save my life. I’m not sure what “Goat Throat” is about, either. Maybe The Scrams are trying to warn the world about some sort of human-animal hybrid.

Whatever, it’s an irresistible little tune with just a hint of ’60s-style soul. “Space Jeeps” is a science-fiction adventure, while “Cry, Cry Cry” almost sounds like The Fleshtones mangling Dion & The Belmonts’ “Teenager in Love.”

I’d be proud to have The Scrams in my backyard. If you want a hard copy of the CD, you’ll have to buy it from The Scrams. You can download the MP3 version for free at www.thescrams.com. 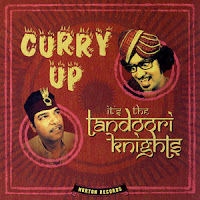 After all, just this year Bloodshot Bill has released records with both — recording as The Ding-Dongs with Sultan and as The Tandoori Knights with Khan. Maybe he can instigate the melding of the two — a trio to be known as “The Tandoori Dongs.”


If I had to choose between the two, Tandoori Knights would get my nod. It’s got the same spirit of lo-fi rockabilly zaniness as The Ding-Dongs, but there’s also a flavor of East Indian exotica. (Both Knights are Indian. Arish Khan is of East Indian heritage, while Bloodshot Bill is Native American. And both were born in an exotic foreign country called Canada.)

“Pretty Please,” which opens the album, kicks off with a slow, slinky slide guitar. It sounds like a crude ditty beginning for what could, but never quite does, blossom into a huge Bollywood ballad. Other diamonds here include the rocking “Dress On,” a takeoff on Mitch Ryder’s “Devil in a Blue Dress” and “Big Belly Giant,” which features a dangerous sax and a chicken-lickin’ guitar while the Tandooris sing “eeny meenie miney moe.”

But my favorite is the sour-grapes dismissal of America’s oldest teenager on the song “Bandstand.” The boys protest in the refrain, “They won’t let Tandooris play on the Bandstand!” Come on, Dick, let ’em on the show! I don’t care if American Band did go off the air more than 20 years ago.

Consumer warning! I notice that a new copy of this CD is available for $23 and change from Amazon. But you can get it for $10 on the Norton Records site.