He wrote it more than a year ago, but I just stumbled across singer/songwriter Tom Russell's haunting essay, "Where God and the Devil Wheel Like Vultures: Report from El Paso." It's a bittersweet, harsh funny in a dark way and weirdly poetic examination of the sad state of affairs in Cuidad Juarez as well as El Paso, where Russell has lived for the past 13 years.

It's a lament for the city now known as The Murder Capitol of The World. Strangely, it's also a celebtation. 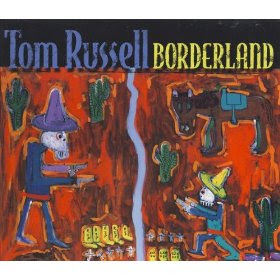 I used to think of Orson Welles’ noir classic: “Touch of Evil,” when I walked down the bridge into Ciudad Juarez. That sinister feeling which draws the gringo-rube into web of rat-ass bars and neon caves; the nerve tingling possibility of cheap drink, violence, and sex; sex steeped in sham clichés about dark-eyed senoritas and donkey shows. It’s that heady, raw – anything goes, all is permitted, death is to be scorned- routine which informed and carved out the rank borderline personalities of John Wesley Hardin, Billy the Kid, Pancho Villa, and hundreds of Mexican drug lords. Western myth now grim reality. You craved the real west, didn’t you?

I wasn't around in the days when Sinatra played Juarez, as Russell sings about on his album Borderland. But Russell's words evoke memories of those distorted strains of Canned Heat's "One Kind Favor" and The Doors' "Riders on the Storm" coming out of jukebox of El Submarino bar off Juarez Avenue, hitting my brainwaves in perfect synch with the first jolt of tequila back in 1972.

Of cab drivers, hookers, cheesy strip-joint MCs -- "Señor, you can kiss the monkey ..." -- of cheap ham sandwiches at Fred's Rainbow Bar, 35-cent margaritas, those weird guys who use to go from club t club clicking together little metal bars (hooked up to a battery) and offering drunken gringos the chance to get the hell shocked out of them for 75 cents.

Toward the end of the piece, Russell writes:

These are the far regions and outer limits of America. La Frontera. We’ve twisted and exploited and mined the old West for those clichéd, watered-down versions of violent cowboy and Indian stories, where John Wayne kicks ass and rides away in a white hat. Now it’s the drug soldiers and assassins in baseball caps who hold court with submachine guns, which we sold ‘em. They’re the ones kicking ass. You can write it from any political angle and subtext. You can walk around leaning on the moral, self righteous crutch of whatever religion and political party or news magazines you subscribe to. The palaver don’t cut much on the backstreets of Juarez. There’s a story here, but it exists in illogical fragments, chaotic subtexts, and poverty economics cured in the meth-soaked algebra of need, greed and corruption. And eventually it all plays out in song. Folk songs, cowboy ballads and Narco-corridos. What you can’t see with your eyes you can feel in your heart. Hand me down my old guitar.

Read the entire "Where God and the Devil Wheel Like Vultures: Report from El Paso" HERE