A version of this was published in The Santa Fe New Mexican
February 25, 2011


Johnny Cash was no stranger to gunfighter ballads, but I only recently learned that at one point, fairly early in his career, he also took a stab at the spy-music genre. 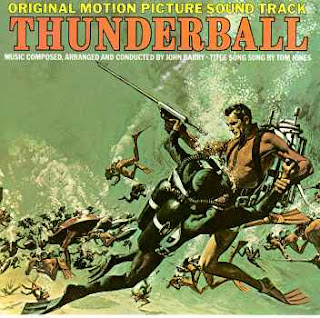 That’s right. And a James Bond movie theme to boot. “Thunderball,” by Johnny Cash, is one of the many delights to be found on the brand new rarities collection Bootleg, Volume II: From Memphis to Hollywood.

Cash’s “Thunderball,” never before released in these United States, was rejected by the producers of the Bond movie by the same name. Instead, they chose another song with the same name by Tom Jones, which, to be blunt, is superior to Cash’s tune. Jones’ “Thunderball” is my favorite Bond theme of all time, right up there with Shirley Bassey’s “Goldfinger” and Nancy Sinatra’s “You Only Live Twice.”

Even though Cash’s trademark chunka-chunka beat isn’t really suited for the debonair 007, the Man in Black’s “Thunderball” is an interesting little tune. And at least it doesn’t have the weird grammatical gymnastics of Paul McCartney’s “Live and Let Die” (”... in this ever-changing world in which we live in ...”) Cash sings, “Thunderball your fiery breath can burn the coldest man/ And who is going to suffer from the power in your hands? 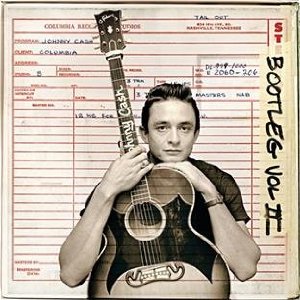 Cash seems far more at home with a song like “Restless Kid.” It’s an outlaw tune that should have been a classic — also recorded by Ricky Nelson (an underrated singer of cowboy songs) and Waylon Jennings. The version here is a demo by Cash, featuring only his voice and acoustic guitar. Cash seems natural as he takes the persona of a desperado: “None of your business where I’ve been, don’t ask me what I’ve done/Run your ranch and punch your cows and stay behind my gun. ... They got a man locked in a cell that’s a freer man than I/He’s gonna laugh right in their face when they lead him out to die and/He’s gonna leave this bad land and ride off in the sky.”

From Memphis to Hollywood is a worthy successor to Personal File, the excellent first Sony Legacy Cash "bootleg" in 2006. There are 57 tracks, including a radio performance, demos of Cash songs — both famous and obscure — a smattering of old Sun records, and tunes that, for whatever reason, never saw the light of day.

Although the sound quality isn’t great, the radio show — on station KWEM in West Memphis, Arkansas — is a real kick. I especially like the commercials in which Cash plugs aluminum screens and awnings.

Here are some more highlights from From Memphis to Hollywood:


* “I Walk the Line.” This is a demo of one of Cash’s best-known songs. It’s not as good as the hit version. It’s interesting that the song started out as a slower, almost mournful tune — not the punchy masterpiece we know and love.

* “New Mexico.” It’s a tale of a young cowpoke who signs on to work on a cattle drive one summer in the Land of Enchantment. He faces terrible weather, thorns and thistles, and a boss who rips him off. “Go back to your friends and loved ones/Tell others not to go/To the God-forsaken country they call New Mexico.” I don’t know why the state Tourism Department has never picked up on this one.

* “On the Line.” This war song reminds me of John McCutcheon’s “Christmas in the Trenches.” Backed by a sweet mandolin, Cash sings of a battle in some unnamed war. An officer on one side calls for a ceasefire. “You can go ahead and kill me, enemy, but I’m taking my wounded from the creek.” His counterpart on the other side agrees and follows suit. And just like the World War I “Christmas truce” McCutcheon sings of, the two sides come together when the gunfire stops and somehow can’t see fit to start shooting one another when their task is finished.

* “Six White Horses.” This was a hit for Johnny’s brother Tommy Cash in the late ’60s. It’s basically a country version of “Abraham, Martin & John,” but I’ve always liked it better than Dion’s more popular song. In the verse about Martin Luther King, Johnny sings, “Some preach black and some preach white/Which is wrong and which is right?/Takes every kind to make the world go round/Only takes one to gun you down.” Such thoughts might not seem that daring today. But back when it was written, there were undoubtedly millions of segregationist country radio fans who took personal offense.

* “Come Along and Ride This Train.” Here is a demo of what became the theme song of a popular segment on Johnny Cash’s ABC variety show in the late ’60s and early ’70s. It’s amazing that the song does not appear on Cash’s 1960 concept album Ride This Train.

* “One Too Many Mornings.” Unlike most Nashville stars of his day, Cash palled around with New York folkies, most famously Bob Dylan. Cash covered Dylan’s “Don’t Think Twice.” I like this one even better, though it’s not as much fun as the Dylan-Cash collaboration “Wanted Man.”

* “Hardin Wouldn’t Run.” Speaking of Dylan songs and outlaw songs, here’s a tune about the infamous Old West gunfighter (1853-1895). I don’t know about you, but I like this one better than Dylan’s “John Wesley Harding.” (Dylan misspelled the man’s name.) In Cash’s tune, Hardin is killed by Sheriff John Selman because Hardin’s girlfriend pistol-whipped Selman’s deputy. Not sure how historically accurate that is, but it makes a great murder ballad.

Here's a song from the collection I probably should have mentioned: