A version of this was published in The Santa Fe New Mexican
February 4, 2011 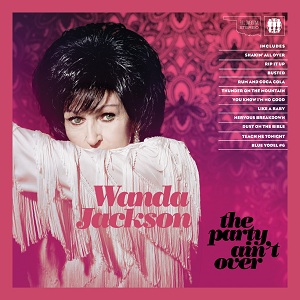 It’s like that joke told in music circles: How many bluegrass fans does it take to change a light bulb? The answer: Four — one to screw in the bulb, three to sit around and talk about how the old bulb was better. But this bulb — Wanda Jackson’s new Jack White-produced album, The Party Ain’t Over — has brought out my crotchety purist. ( And, as Luke told Laura — a few days after he raped her — “That’s a side of me I don’t like.”)

Brief history lesson: For those unfamiliar with Jackson, she’s a rockabilly fireball from Oklahoma who started out as a country singer — discovered by the great Hank Thompson, no less. She wrote the country classic “Right or Wrong.” But she heard the call of the wild. Her high-charged “Let’s Have a Party,” originally recorded by Elvis Presley, was a rock ’n’ roll hit in the late ’50s. Others followed, including “Fujiyama Mama” (which actually became huge in Japan) and my favorite, “Hot Dog! That Made Him Mad.”

In the mid-’60s, when rockabilly became unhip in the wake of the British Invasion (which was stupid, because The Beatles and other Brit rockers loved the ’billies), Jackson, like Jerry Lee Lewis, Carl Perkins, and others, turned back to the world of country. But with the rockabilly revival of the ’80s and ’90s, Jackson started rocking again. She appeared on Rosie Flores’ album Rockabilly Filly in 1995 (along with fellow early rockabilly gal Janis Martin). And — hot dog! — she’s been rocking ever since. Back to the Party: White Stripe Jack White must have a thing for older women. In 2004, he produced an amazing “comeback” album, Van Lear Rose, for Loretta Lynn. I noted at the time in this column that some of the tracks had “about 10 times the drum sound of any previous Loretta effort” and described the song “Little Red Shoes” as “honky-tonk trip-hop.”

But Van Lear is a superior effort, because White stifled himself more on that album. On Party, he frequently goes overboard, doing something I previously assumed was impossible — overwhelming Wanda Jackson.

It’s obvious from the opening moments of the first song — a cover of Johnny Kidd & The Pirates’ “Shakin’ All Over” — that White’s going nuts, turning the knobs up to 11 when a seven would do. The horn section sounds machine-made, and worst of all, White uses some weird effect to distort Jackson’s voice.

But this isn’t even the worst of it. Little Richard’s “Rip It Up,” a natural song for Jackson, seems to have cold techno overtones. And “Busted” (a Harlan Howard tune recorded by Johnny Cash and Ray Charles) starts out with Jackson singing it straight but then turns into a jackhammer waltz or perhaps a mad polka. It sounds like some funny mash-up song created by a bored kid for YouTube giggles. And then there’s The Andrews Sisters’ “Rum and Coca-Cola.” Under White’s direction it sounds like a rejected commercial for Captain Morgan.

Sure ain’t like the Wanda we knew in the ’50s — grouse grouse, grumble grumble.

But seriously, folks, I don’t mind hearing Jackson in a more modern context. Back on her 2003 album, Heart Trouble, she played with The Cramps on a couple of tracks. “Riot in Cell Block #9” was a joyous kick, but even more successful was the remake of her old hit “Funnel of Love.” The fuzzy guitar didn’t sound like it did in the original version, but Lux and Ivy basically stayed in the background, letting Jackson carry the song.

That’s the trouble with The Party Ain’t Over. Too often it seems that White is trying to upstage Jackson with his gee-whiz studio gimmicks.

To be sure, sometimes White’s production works. And when it does, it’s wonderful. By far the best song here is “Thunder on the Mountain.” It’s a not-very-well-known Bob Dylan song from his 2006 album Modern Times — Dylan in his raging Old Testament prophet mode. It’s a hard-driving romp. Jackson sings it with undisguised glee backed by White’s screaming guitar, a horn section that sounds fueled by pep pills, and a madhouse Jerry Lee-style piano. It was a wise choice to pick this for the first video from the album.

Another song that stands out in a good way is Jackson’s cover of Amy Winehouse’s noir-soul “You Know I’m No Good.” Jackson captures the smoky, sleazy spirit of Miss Beehive’s song. True, it’s not a little disturbing to hear her sing, “I’m in the tub, you on the seat/Lick your lips as I soap my feet/Then you notice little carpet burn.” But sometimes disturbing is good.


The sexy Dinah Washington classic “Teach Me Tonight” almost works. It’s a perfect tune for Jackson. The steel guitar sounds sweet, but the twinkly keyboards get annoying: it seems White turns everything up — the horns, the guitar — during the instrumental. It’s not as bad as it could have been, but a lighter touch would have sounded so much better.

And then there’s Jimmie Rodgers’ “Blue Yodel #6,” which ends the album. It’s a low-production, unplugged version. No great revelation, just a good country song that Jackson does so well without all the weird studio distractions that mar many of the songs.

If this album gets more people interested in Wanda Jackson, then yippee. But take some advice from this stuffy old purist and seek out her wild sounds of yesteryear.

Wanda, yesterday and today: I’ll play some Jackson cuts from her long career on The Santa Fe Opry, the country music Nashville does not want you to hear, 10 p.m. on Friday. And don’t forget Terrell’s Sound World, free-form weirdo radio, same time on Sunday, both on KSFR-FM 101.1. It’s streaming and screaming on the web at www.ksfr.org.

BLOG BONUS:
Here's Wanda back in the '50s