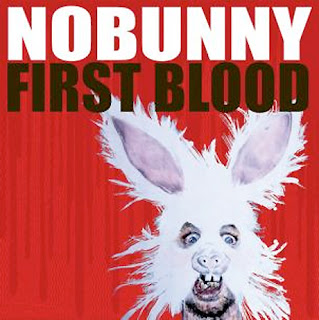 * First Blood by Nobunny. I downloaded this in anticipation of Nobunny's show in Santa Fe last month. And then, old fart that I am, I was too pooped after a busy day of covering the state Legislature, so I missed the damned show. At least I still have the album.

But enough of my pathetic excuses. ...

Nobunny is a crazy dude, real name Justin Champlin, who prances around the stage in a ratty-looking fuzzy rabbit mask. He  looks like a wino who mugged the Easter Bunny.

His music is peppy pop punk, a slightly sweetened Ramones with some echoes of T-Rex, especially on the song "Breath." His sound also reminds me a little of that of Hunx & His Punx (who I saw open for Kid Congo Powers in New York last summer.) 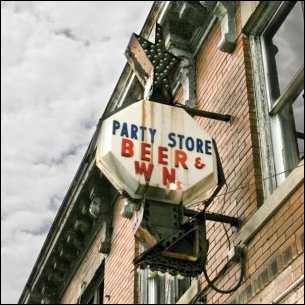 * Party Store by The Dirtbombs. Here's a curveball -- The Dirtbombs, that Motor City primitive garage/punk/ soul outfit led by the mighty Mick Collins do an entire album of what several writers have called "classic Detroit techno" songs.

For someone like me who couldn't tell a classic Detroit techno band from a classic Cincinnati bagpipe ensemble, this is a big "huh"? But I'm a Dirtbombs fan and one of the things I like about the group is their willingness to experiment in various sounds.

But I have to say, this little experiment has left me disappointed.

The album starts off strong with a song called "Cosmic Cars." This might have started out as a techno tune when done in the early 80s by Cybotron. But here it's pure Dirtbomb rock 'n' roll. (The DBombs do another Cybotron song here, "Alleys of Your Mind," which also is one of the best on Party Shop.)

But by the second tack, "Sharaveri" the disco drums kick in. And they're there for most of the rest of the record. Come on, Mick, if you're going in that direction, at least give us a few Village People covers! 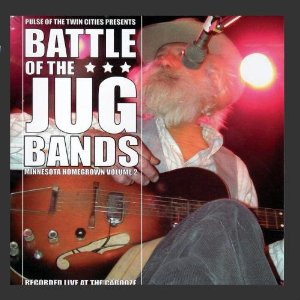 * The 17 tracks on  Battle of the Jug Bands that I didn't get last time. This probably is a great example of a show that would have been a lot more fun to be at than to hear later.

The Battle of the Jug Bands is an annual event that takes place in Minneapolis every weekend after the Superbowl. This album is from the 2000 show. I'm not sure whether they've released any since then.

A main problem is that the recording quality isn't all that great. And while I'm no jug purist, too many of the groups here seem don't even come close to a real jugband. Much of this album is goofy pseudo old-timey sounds, like third rate Asylum Street Spankers.

Don't get me wrong, there's some cool little tunes here. "Hot Corn" by Ammon Hennessy is one of those. "Deep Fried Gators" by Sloppy Joe is a delight, as is their Jimi Hendrix parody "Purple Hay." My favorite line there is " 'scuse me while I kiss this cow."

But one of the problems here is that there's too many "wacky" covers or parodies of rock or pop tunes. The "jug" covers of "Sweet Home Alabama" and "Up on Cripple Creek" are pretty useless.  (I previously downloaded previously "Kung Fu Fighting" by Girls on Top, which is kind of cool  and "Sweet Virginia" by Hoakim Yoakim & The Eggwhites, which falls flat.) 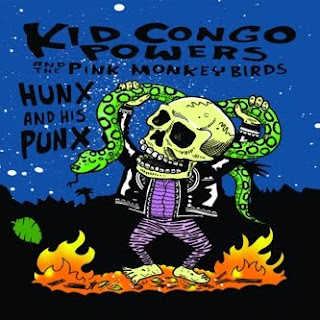 * A bunch of garage punk singles from Scion A/V. : Black Lips, Nobunny, not to mention Kid Congo Powers and Hunx & His Punx. I'd already picked up a few tunes by The Pierced Arrows, The Dirtbombs, Davilla 666, etc.  from the Scion website when they were offered for free there. (There's still lots of free stuff here, so check it out.)

I'm not really sure why Scion has decided to be the corporate benefactor of garage music these days. They've produced festivals and shows around the country (including the Kid Congo/Hunx show I mentioned above) and produced this cool little documentary I blogged about a few months ago.

So is Scion trying to co-opt the "garage scene"? Oh, who cares? I tend to think it's some young person in the marketing department with good taste who's somehow convince his or her bosses that this is a good promotion tool. I say enjoy it while the ride lasts. The company has made some great bands available to a lot of people who might not have heard it otherwise.

* Four songs from Hannibalism! by The Mighty Hannibal. This has been on my "Saved" list forever. It's about time I download this collection of sweet soul sounds from the Mighty one. More on this next month.
at March 05, 2011