OPENING THEME: Let it Out (Let it All Hang Out) by The Hombres
Rats in My Kitchen by The Fleshtones
Alleys of Your Mind by The Dirtbombs
That's the Bag I'm In by The Fabs
I Want to Be Your Pussy Cat by Lightning Beat-Man
I Don't Know by The Del Moroccos
I Need Your Lovin' by Wolfman Jack & The Wolfpack
Jail La La by The Dum Dum Girls
Sweet Skinny Jenny by Esquerita
Bip Bop Bip by Barrence Whitfield & The Savages
Baby I Grind by Les Sexerinos
Love of My Life by Ruben & The Jets 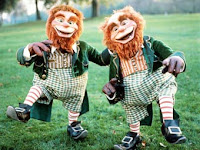 I Will Stand at Your Grave by Sinead O'Connor
Almost a God by Movie Star Junkies
Ask the Angels by Patti Smith
Freedom by J. Mascis & The Fog
Puss in Boots by New York Dolls
Waitin' For Waits by Richie Cole
Innocent When You Dream by Tom Waits

CLOSING THEME: Over the Rainbow by Jerry Lee Lewis