TERRELL'S TUNEUP: Good Enough For Me

A version of this was published in The Santa Fe New Mexican
March 4, 2011


Remember the good old days when the phrase “alternative rock” conjured up crazy visions of Gibby Haynes blasting a shotgun from the stage of a Butthole Surfers show as film clips of gruesome medical procedures played in the background — instead of now, when the term all too often means some wimp whining because his puppy has the sniffles? 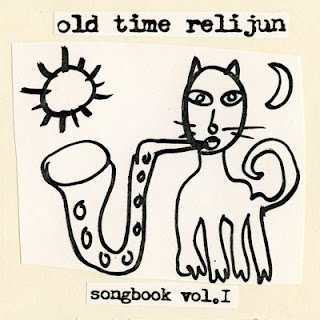 There’s still some healthy weirdness out there in the outer fringes of rock’ n’ roll. One such practitioner is a guy called Arrington De Dionyso, whose old band Old Time Relijun sailed stormy musical oceans where few other sailors were brave enough to venture.

Arrington’s still around — he’s supposed to be releasing a new album this month. As for Old Time Relijun, the group’s first album, long out of print, was rereleased last year by the Northern Spy label with all sorts of bonus tracks.

Hearing Songbook, Vol. 1 for the first time might seem like stumbling onto some bizarre group of hopped-up tribesmen from deep within a jungle in a country whose name you can’t even pronounce. Actually, the group was from Olympia, Washington. It had a stand-up bassist and a drummer who sometimes played accordion — and De Dionyso, who sang and played guitar, sax, clarinet, and jew’s-harp.

A few months ago, making a stray reference to this band in this column, I said De Dionyso sounded like “Roy Orbison on angel dust.” I’ll stand by that quip. You’ll also hear echoes of the good Captain Beefheart as well as of avant-garde jazz avatars like Eric Dolphy and John Coltrane. And there’s a definite no-wave influence in Relijun. De Dionyso’s sax takes a (James) Chance. And being that the band was from Washington state, there’s probably a little Twin Peaks mushroom madness in the mix as well.

And don’t forget weirdo-rock pilgrims Pere Ubu. There’s a song here called “Ubu’s Theme” — which features accordion and what sounds like a bass clarinet. Less than a minute long, it seems like a snatch from the soundtrack of a French murder mystery. But even more Ubu-like is the following song, “Baby Dragon,” on which De Dionyso sings in a David Thomas-like warble.

Other times, De Dionyso sounds as if he’s attempting Tuvan throat singing, sounding like a sinister version of Popeye. And sometimes he employs a strange and hilarious falsetto, for example, on the song “Qiyamat,” on which he sounds like a nightmarish cartoon character.

Most tracks here are only two or three minutes, which suit OTR best. But there’s a handful of six-minute (or thereabouts) excursions on which the group gets to stretch out. “Qiyamat” is one of these. And so is “Fig,” though it’s not as interesting as most of the group’s material (hint: There’s a drum solo). By far the best long song here is “Manticore/Lion Tamer.” It’s actually a medley of two songs, early versions of both being among the bonus tracks. The reason the medley works so well is that, except for a few moments in the middle, in which a twangy guitar riff is repeated to the point of frustration, it rocks from start to finish.

I realize that this music is too nuts for most. But Old Time Relijun was good enough for me. 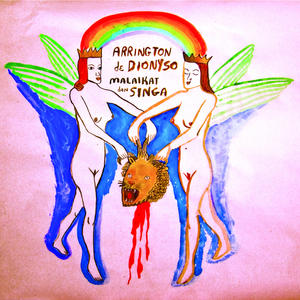 Arrington unleashed: Although Old Time Relijun is no longer an ongoing concern, De Dionyso is still twisting heads off. On his 2009 album, Malaikat dan Singa, he sings in the Indonesian language (the album’s name — which is now the name of De Dionyso’s backing band — means “Angels and Lions”). As strange as the concept seems, this is no intellectual exercise. This music rocks! (After all, he says he recorded the album n Indonesian “to impress a girl.”)

You can listen to (and download) several live versions of Malaikat at WFMU’s Free Music Archives. The first song, “Kedalaman Air,” might remind you of a Bizarro World version of Talking Heads’ “Psycho Killer” with a downright vicious, crunching guitar.

Then there’s “Mani Malaikat,” a couple of minutes shorter than the album version, but just as ominous.

The set ends with a 15-minute radio interview of De Dionyso. (He talks like a regular American guy, not the screaming voodoo shaman of his performances.)

On this site you also can find other radio performances by De Dionyso, including some (mostly) instrumental meditations in which he’s backed by upright-bass player Gene Janas.

In fact, De Dionyso is all over the internet. There are lots of YouTube videos of him, and at the K Records website, there’s a streaming version of him performing “Hot Head” as a tribute to the late Beefheart. Slide over to www.krecs.com/arrington, and you’ll find an 11-minute live video of De Dionyso and the Malaikat dan Singa band. But more important, streaming at the site are four songs from the upcoming Malaikat album, Suara Naga.

“Kerasukan” has De Dionyso angrily chanting over a farting electronic pulse. (Maybe he’s saying, “Turn that thing off!”) Drums and sax later add to the chaos.

“Baru Limunan” is the singer at his most urgent. He pleads, threatens, and warbles as the steady, pounding bass and drums suggest some race against time.

“Aku Di Penjara” reminds me of Polish rocker Kazik Staszewski when he does his version of hip-hop. “Bianglala” features a repeated bass line that sounds like a dub-reggae take of “Anarchy in the U.K.”

I don’t understand a word De Dionyso is singing, but it’s still a Relijous experience.

Here's one of the Malaikat videos.