A version of this was published in The Santa Fe New Mexican
March 11, 2011 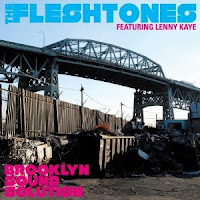 On their new album, Brooklyn Sound Solution, those old masters known as The Fleshtones don’t do much but have a great time. No major statement, no great artistic insight, no over- all point. And those who love this basic, unaffected ’60s rock ’n’ soul-drenched guitar rock will have a great time listening to it. It’s scheduled for release on Tuesday.

On this album, the band, fronted by founding members Keith Streng and Peter Zaremba, is joined by Lenny Kaye, guitarist for The Patti Smith Group and compiler of the influential Nuggets collection of 1960s garage-band classics. (Kaye is less known for being the author of a book about crooners, You Call It Madness.) He fits in seamlessly.

I could spend a couple of paragraphs informing the uninitiated about this seminal New York band (which claims to be the only band to debut at CBGB — in 1976 — that never broke up and never had an inactive year). But you can find out about the group for yourselves on the Fleshtones’ bio documentary Pardon Us for Living but the Graveyard Is Full, available in its entirety online HERE.

What sets BSS apart from other Fleshtones albums is that nearly all the songs are instrumentals, covers, or both.

My favorite tunes here are a couple of cranked-up blues covers. There’s the signature tune of Bo Diddley sideman Billy Boy Arnold, “I Wish You Would” (probably best-known for its cover by The Yardbirds). The Fleshtones play it with a fuzzy bass line that can’t help but make you think of The Doors’ “Break on Through.” They could easily make a medley of the two songs.

Even better is “Rats in My Kitchen,” a song originally done by Sleepy John Estes. Estes recorded this for Sun Records in the ’50s. He did it as a slow blues. The Fleshtones transform it into a pounding, menacing song of horror. “You know I came home late last night/Somewhere ’bout half past 10/They stared at me with mean red eyes/I had to go right back out again.”

My only complaint about BSS is that there are too many instrumentals. Are Streng and Zaremba trying to conserve their vocal chords or what? Don’t get me wrong, I like all the songs. Their instrumental cover of “Day Tripper” rocks, and the Kaye composition “Lost in Xandu” sounds like a forgotten surf classic from a parallel universe.

And I’ve always loved the cool, jazzy opening song, “Comin’ Home Baby,” which was done in 1962 by Mel Tormé. Now granted, neither Zaremba nor Streng can sing like the Velvet Fog, but this song would sound even better as a vocal number.

That quibble aside, it’s great just knowing that The Fleshtones are still out there keeping the sound they call “super rock” alive.

* Party Store by The Dirtbombs. It had been rumored for at least a couple of years that The Dirtbombs’ next project was going to be an album of bubble-gum covers. Head Dirtbomb Mick Collins had even talked about that possibility in interviews . 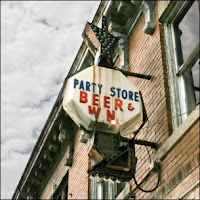 But while I was hearing, in the jukebox of my mind, Collins growling “Yummy yummy yummy, I’ve got love in my tummy” — with the group’s powerful two-bass, two drummers lineup behind him — The Dirtbombs threw a curveball.

The new album consists of covers of what several writers have called “classic Detroit techno” songs.

For someone like me who couldn’t tell a classic Detroit techno band from a classic Cincinnati bagpipe ensemble, this is a huge “huh?”

But I’m a Dirtbombs fan, and one of the things I love about the group is its willingness to experiment with various sounds.

Plus, I’m curious. I’ve always associated Detroit with Motown, Mitch Ryder, MC5, and the great neo-garage bands that arose there in the ’90s — groups like The White Stripes and Collins’ first band, The Gories.

But I have to say, this little experiment has left me disappointed. How many other punk bands could cover Lou Rawls, The Bee Gees, and Yoko Ono as this Motor City primitive garage/punk/soul outfit did on its 2006 compilation If You Don’t Already Have a Look?

Party Store starts off strong with a song called “Cosmic Cars.” This might have begun as a techno tune when done in the early ’80s by Cybotron. But here it’s pure Dirtbomb rock ’n’ roll. (They do another Cybotron song here, “Alleys of Your Mind,” which is also one of the best on the album.) But by the second tack, “Sharivari,” the disco drums kick in. And they’re there for most of the rest of the record. Come on, Mick, if you’re going in that direction, at least give us a few Village People covers.

If you can make it through the 21-minute “Bug in the Bass Bin” (the first six minutes or so consist of engine noises), you’re a better Dirtbombs fan than I am.

The Dirtbombs aren’t the first to attempt a fusion of techno and garage or punk or whatever you want to call it. Just a few months ago in this column I reviewed a weird little album called Two-Headed Demon by a one-man band from Switzerland, a guy who calls himself Urban Junior.

UJ’s “Swiss-spankin-electro-trash-garage-boogie-disco-blues-punk,” as he calls it, sounds looser, trashier, and closer to the punk spirit than the stuff on Party Store. And it probably helps that none of the tracks on Two-Headed Demon are more three minutes.

But The Dirtbombs rarely stay in one place. Their next album is bound to be different. Maybe they’ll even give us some bubble gum.