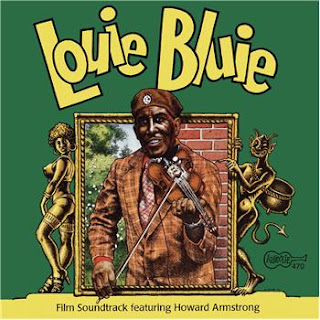 * Louie Bluie Film Soundtrack by Howard Armstrong. About 30 years ago, my pal Alec turned me on to a fun little LP called Martin, Bogan & Armstrong. It was an old African-American string band recorded in the early '70s.

It wasn't "blues," there there were some bluesy tunes there. It wasn't "jug band." These guys were playing mainly pop and jazz tunes of bygone eras. The players were old guys but all excellent musician -- and they were full of Hell. They'd been playing together in various combinations since the '30s under names such as The Tennessee Chocolate Drops and The Four Keys.

For instance, they start out with a straight version of the  uptight WASPy frat  song "Sweetheart of Sigma Chi" (which before, I'd only heard performed by The Lettermen!) before they slip into a parody that was popular in the '20s ("She's the sweetheart of six other guys.") But my favorite MB&A song was "Do You Call That Buddy," which has a line that stuck with me for years: "If I had a million doughnuts, durn his soul, I wouldn't even give him a doughnut hole."

Just a few years ago I found Martin, Bogan & Armstrong on CD, as part of a twofer with a subsequent album That Old Gang of Mine. But even more recently I discovered a documentary called Louie Bluie made in the mid '80s directed by Terry Zwigoff, who is more famous for Crumb. The title character of Louie turns out to be fiddler/mandolinist Howard Armstrong. Also featured here is guitarist, singer Ted Bogan -- who catches continual unmerciful ribbing from Armstrong throughout the film.

The film tells the story of Armstrong (who got the nickname of "Louie Bluie" from a tipsy mortician's daughter) To quote Roger Ebert, "The movie is loose and disjointed, and makes little effort to be a documentary about anything. Mostly, it just follows Armstrong around as he plays music with Bogan, visits his Tennessee childhood home, and philosophizes on music, love and life." And I love it.

This soundtrack album on Arhoolie captures some of the greatest moments of the film, as well as some that didn't make the final cut. There's a delightfully filthy version of "Darktown Strutter's Ball." There's blues, gospel and jazz tunes. Also, a German waltz and a Polish tune. Yes, Armstrong, as he explains in the movie, was fluent in several languages, including Italian and a little Chinese. This, he said, helped him get gigs when he moved to Chicago.

Included on this album are some old songs originally released on 78rmp records, including some with Yank Rachell, who appears in the movie. A couple of these feature Sleepy John Estes on vocals. 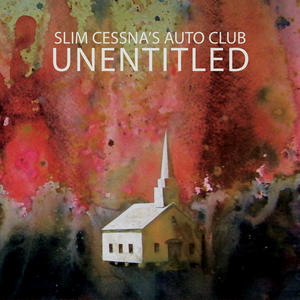 * Unentitled by Slim Cessna's Auto Club. This band often is billed as a "country gothic" band. Led by Cessna, who shares vocal duties with sidekick Jay Munly, the Auto Club often takes the guise as sinners in the hands of an angry God.

But on this album, which some critics are saying is the group's most accessible, so many songs are so upbeat and happy sounding, I really don't think the "gothic" label does them justice.

However, the very next song takes off with an eye-opening, frantic, almost '90s ska-like beat. The music is fierce and thundering and not very "country." Then  the following song "Thy Will Done" gets back to the banjo with an almost raga-like melody and some otherworldly whistle instrument I've yet to identify. The only thing this one lacks is Tuvan throat singers.

That old time religion is a major theme with the Auto Club. The 7-minute "Hallelujah Anyway" is a twisted tale of an arranged wedding. But even better is the closing song, "United Brethren," an emotional song of a preacher losing his congregation to another church -- just as his great-grandfather had experienced. It's not a problem most of us will ever face, but as Munly pleads, "Lord have mercy upon us ..." in his lonesome tenor with just an autoharp behind him, only the the most hard-hearted heathen would be unmoved. 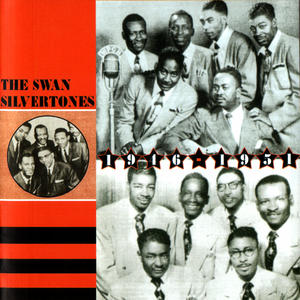 * The Swan Silvertones 1946-1951. And speaking of spiritual crisis, the song "A Mother's Cry" on this album starts out with "Oh this world is in confusion .." -- and the listener isn't confused at all. It's the story of a mother whose son is fighting overseas. I would guess Korea.

Yes, those post WWII years covered by this album were confusing times indeed and, probably not coincidentally, great years for Black gospel music as well.

Take  "Jesus is God's Atomic Bomb," another tune in this collection. The Silvertones sing, "Oh have you heard about the blast in Japan/How it killed so many people and scorched the land." But it gets scarier. "Oh it can kill your natural body, but the Lord can kill your soul ...'

The Swan Silvertones was an a capella group led by the great Claude Jeter, a former coal miner from Kentucky who wrote many of the songs here, including the ones I mentioned. This album captured their years at King Records. They weren't as raw sounding as The Five Blind Boys of Mississippi. They didn't have the irresistible personality of Sister Rosetta Tharpe or the sweet grace of Mahalia Jackson. But the Silvertones were solid and credible. And even now, a respite for confusing times. 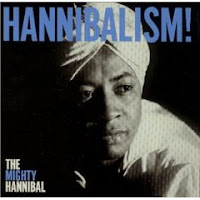 * The tracks I didn't get last month from Hannibalism! by The Mighty Hannibal. This is not your average obscure lost '60s soul-shouter compilation. This album contains the greatest anti-war song of the Vietnam era that you've never heard. Written and recorded in 1966, "Hymn #5" is a first-person tale of a scared soldier. It's a minor-key moan that sounds like one of the spookiest minor-key gospel songs you can imagine.


There's a sequel that came four years later -- following a stint in prison by Hannibal  for tax evasion -- another soldier's-eye-view of the war. It's good, but not a fraction as jolting as "Hymn #5."

I love Hannibal's early dance '60s tunes like "Jerkin' the Dog" (Settle down, Beavis!) and "Fishin' Pole." But I find his religious cautionary tales extremely fascinating. The moral of "The Truth Shall Make You Free" basically is that Jesus can help you kick heroin. Hardly original, but Hannibal sings with wild conviction. He was an addict for some years in the '60s. "There's nothin' I wouldn't do when I needed a fix/ I met the mother of my children goin', turning tricks," Hannibal testifies. And  its dark psychedelic/Blaxplotation guitar touches and the "Pappa Was a Rollin' Stone" bass line make you wonder why the song and the singer didn't become better known.

Even wilder is the final song, "Party Life." What can you say about a song that starts out "There was a pimp by my house the other day ..." Next thing you know, said pimp has taken the singer's daughter and she ends up in a hospital in Kentucky in such bad mental condition she doesn't even recognize her own dad. Seriously, people, keep those pimps away from your home!
at April 09, 2011