Webcasting!
101.1 FM
email me during the show! terrell@ksfr.org

OPENING THEME: Let it Out (Let it All Hang Out) by The Hombres
I Walked With the Zombie by Roky Erikson & The Nervebreakers
Don't Slander Me by Lou Ann Barton
New Orleans Walkin' Dead North Mississippi Allstars
Can O' Worms by Churchwood
Blew My Speakers by The Angel Babies
Bad Boy by The Backbeat Band
Dizzy, Miss Lizzy by Larry Williams
Shout by The Isley Brothers
Right String Baby (But the Wrong Yo Yo) by Carl Perkins

Grease Box by TAD
I Don't Think So by Dinosaur Jr.
I'm Now by Mudhoney
Who Was in My Room Last Night by The Butthole Surfers
Funnel of Love by Wanda Jackson with The Cramps
One Monkey Don't Stop No Show by Big Maybelle
Hot Skillet Momma by Yochanan
Show Me by Joe Tex
Bumble Bee by LaVerne Baker 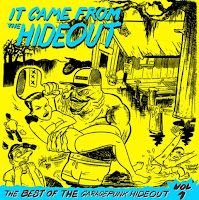 It Came From The Hideout/Records to Ruin Any Party Set
(For More Info CLICK HERE )
Whistlebait Baby by Lovestruck
I Need More by The Cynics
Dust My Broom by The Jukejoint Pimps
Brush your Tits by Mondo Ray
Short-Term Memory Lane by J.J. by The Real Jerks
Two-Headed Demon by Urban Junior
Short Leash by Scorpion Vs. Tarantula
She by Audio Kings of the Third World
I'm Going Away Girl by The Monsters
City of Bother and Loathe by Jukebox Zeroes

She Floated Away by Husker Du
Rosemary's Baby by Half Japanaese
Gorgeous by Kustomized
Thrash City by Poly Styrene
She's So Scandalous by Black Joe Lewis & The Honeybears
Hymn No. 5 by The Mighty Hannibal
Lonely Town by Stan Ridgway
CLOSING THEME: Over the Rainbow by Jerry Lee Lewis
Subscribe to The Big Enchilada Podcast! CLICK HERE
at April 17, 2011