TERRELL'S TUNEUP: Hits from the Hideout

A version of this was published in The Santa Fe New Mexican
April 15, 2011


A few months ago, Jeff “Kopper” Kopp stumbled across Little Steven’s Underground Garage compilation series The Coolest Songs in the World. He was not impressed. 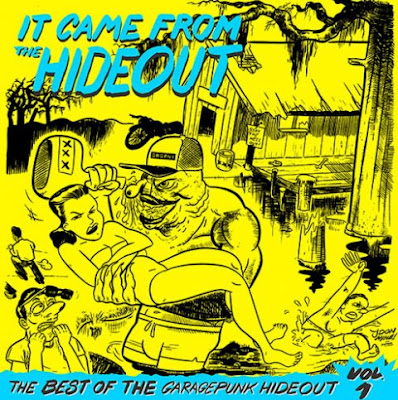 “Looking over the track lists on these, I thought to myself, ‘Wow, these are what he thinks are the coolest songs in the world? Hell, the bands on the Hideout have better stuff than this,’ ” Kopper wrote over at the GaragePunk Hideout, an internet social network he established for rock ’n’ roll misfits and miscreants.

In fairness to Little Steven, the Coolest Songs collections have been graced by bands like The Stooges, The Dictators, The Fleshtones, The Chesterfield Kings, and The Hentchmen.

But Kopper was right. There are indeed unknown bands lurking around the Hideout that put most of the Coolest Songs acts to shame. So he invited bands there to submit original songs for a new independent garage-punk compilation series. It Came From the Hideout: The Best of the GaragePunk Hideout Vol. 1 was unleashed this week with a bitchen monster-cartoon cover by a resident Hideout artist, an Austrian known only as Idon Mine.

(Disclosure time: My Big Enchilada podcast is part of the GaragePunk Hideout Podcast Network. It’s a labor of love I don’t get paid for. Not even in hookers and blow. And except for encouraging some bands I know to submit songs, I’m not in any way connected to this compilation.)

The collection starts out with a new tune from the one band here that you might have actually heard of before. The Cynics is a Pittsburgh group that started out back in the mid-1980s. “I Need More,” with its catchy melody and jangly guitar, sounds like pumped-up, fuzzed-out folk rock.

That’s followed by “Short Term Memory Lane,” a boozy, harmonica-driven rave-up by J.J. & The Real Jerks, a Los Angeles band that also features a piano and sax. That leads into “Bollywood Woman” by The Above, which has a British Invasion, early Who feel, though the band is actually from New York.

A couple of my favorite tracks on this collection are by groups with female vocalists. The Manxx is a Denver band doing a song called “Luck,” which has a hypnotic organ and slashing guitar. Then there’s “Whistlebait Baby,” which almost sounds like a punk bolero, by LoveStruck. This Brooklyn-based power trio, fronted by Danish singer Anne Mette Rasmussen, is one of my longtime favorite bands from the Hideout.

One standout tune here is “She” by Audio Kings of the Third World. The Kings, who are from the third-world back roads of Philadelphia, list The Fall as one of their favorite bands. And indeed, singer Johnny O’s slow, singsong drawl has distinct traces of Mark E. Smith in it. And the fuzzy guitar is downright addictive.

Perhaps my favorite one is “Drunk” by Mark Steiner & His Problems. Steiner is an American who lives in Norway. The song is a sinister blues number that almost sounds like crime jazz, with sleazy sax and clanky percussion.

All in all, It Came From the Hideout is cooler than Coolest Songs.

And here’s some great news: Songs the Hideout Taught Us: The Best of the GaragePunk Hideout Vol. 2 is just around the corner, coming in mid-May. In fact, there’s supposed to be a new volume out every month through August.

The compilation is free to Hideout members and available for download in the usual places. There’s more information HERE. 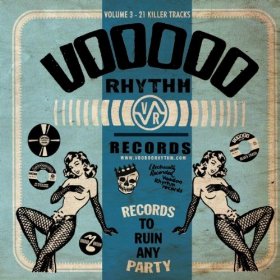 If you’ve ever been tempted to seek out some of the Voodoo Rhythm acts but haven’t quite taken the plunge to actually buy any of the records, this convenient, 21-track compilation would be a good place to start.

It’s a great sampling of stuff, mainly from albums released in the past two or three years. There are songs by The Movie Star Junkies and Delaney Davidson (doing songs from albums that made my 2010 Top 10 list). Label founder/owner Reverend Beat-Man’s frightening signature “Jesus Christ Twist” is there, as is a song by Beat-Man’s garage group The Monsters.

King Khan & The Shrines perform randy punk soul. The Pussywarmers do a gypsy- flavored stomper. You get one-man techno blues from Urban Junior, an acoustic Tom Waitsian dirge from The Dead Brothers, an Elmore James song as you’ve never heard it by Germany’s Juke Joint Pimps, and punchy blues from Hipbone Slim & The Knee Tremblers.

And did I say something about crazy country? Check out Zeno Tornado & The Boney Google Brothers (Switzerland), Sixtyniners (Netherlands), and Mama Rosin’s Swiss/Cajun “Le Pistolet,” which features a weird a cappella doo-wop intro.

And if you want to go back further into Voodoo Rhythm history, the label recently re- released Volumes 1 and 2 in a two-disc set. You can order theVol. 3  CD from Voodoo Rhythm or download it on Amazon.com when it becomes available on April 22.
at April 15, 2011