A version of this was published in The Santa Fe New Mexican
May 6, 2011 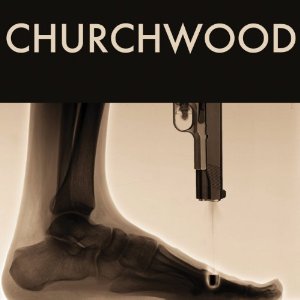 Just what the free world needs: another blues-rock band from Austin, Texas.

But Churchwood is different. To start with, instead of idolizing Stevie Ray Vaughn, this band names the late, great Captain Beefheart as its guiding spiritual light. No, Churchwood doesn’t exactly sound like the Captain on its new self-titled album. It just shares his ability to take the essence of primitive blues and mutate it into something new.

And the group doesn’t sound like all those trashy, lo-fi blues-punk groups — many of which I love — like the ones who populate Voodoo Rhythm’s roster. Churchwood is a little more refined, though it is still far from slick. For the record, the band doesn’t share many musical similarities with one of my favorite bluegrass punk bands, The Meat Purveyors, even though one of its guitarists, Bill Anderson, played in that group.

These guys are downright literate. Singer/ harmonica-honker Joe Doerr might sound like he spends every night chugging Budweisers in biker bars, but he’s a published poet and is a professor of English at St. Edward’s University in Austin. Churchwood’s literary bent is most obvious in the song “Rimbaud Diddley,” a tribute to Elias McDaniel and his famous beat as well as to the French Symbolist poet.

(There is rock ’n’ roll precedent here. Bob Dylan namechecked Rimbaud in the song “You’re Gonna Make Me Lonesome When You Go,” and Patti Smith began her career shouting “Go Rimbaud, go Rimbaud” on the song “Land” on her first album, Horses.)

And then on “Ulysses,” Churchwood cleverly mixes references to the hero of the Odyssey, the hard-drinking Civil War general, and James Joyce.

And wake up, fans of Hermann Hesse and Carlos Santana. There’s a song called “Abraxas.” This is a spoken-word piece with a bluesy backdrop and a beatnik vibe. Doerr recites, “I only speak in tongues now/ I wrangle serpents because they rankle me/ I do sleep well in the arms of dragons/Blind drunk on poison with the will to see.”

My favorite Churchwood song is “Car Crash,” despite its grim lyrics. The narrator prophesies and describes in detail his own death on some lonesome highway:

“The road is wet and the hills are steep/I’ve miles to go before I sleep/A tractor trailer blows its horn at me/A stream of headlights makes it hard to see.”

But the music is so upbeat and rocking that you get the feeling it’s been a pretty fun joyride until the moment of impact.

Hear “Rimbaud Diddley”in its entirety on the latest exciting episode of The Big Enchilada podcast.

* Kicking It With the Twits by The Hickoids. I never would have guessed that long-time Texas cowpunkers The Hickoids were Anglophiles. But they are, and this album, which has a Union Jack-themed album cover, consists of tunes from the British Invasion.

Actually from more than one British Invasion. 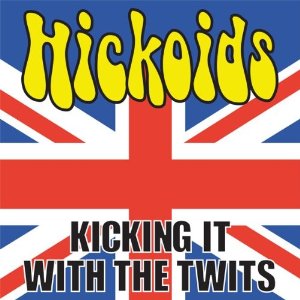 The liner notes of this CD (Note to MP3 generation: ask your parents what liner notes are) explain the weird trans-Atlantic musical ping-pong game between American and British rock ’n’ roll, from early blues and R&B to the Beatles era, West Coast psychedelia, British glam rock, and the rise of punk rock in New York and London.

“Our look and sound has always owed at least as much to England as it does to the United States,” The Hickoids declare, “so this is our own little tribute to the sexually deviant rockers of the British Isles.”

Come to think of it, singer Jeff Smith is known as “the thin white Duke of Hazzard.”

Among the selections here are songs by The Stones and The Who as well as by Mott the Hoople, Brian Eno, The Damned, Slade, The Move, and Elton John. Elton John? Why not. I like The Hickoid’s cover of “Bennie & The Jets,” with its steel guitar, better than Elton’s original. (And at least they avoided “Tiny Dancer.”)

The Hickoids did a great job of choosing at least slightly lesser-known songs from their English heroes. For instance, the Rolling Stones cover is “Have You Seen Your Mother, Baby, Standing in the Shadow?” It’s not exactly an obscurity — it was played on the radio all the time when I was in junior high — but not one overplayed on “oldies radio.” I like the tacky electric organ sound The Hickoids put on it.

My only real complaint is that the album is just eight songs long. Come on, Hickoids, where are the covers of songs by The Animals, The Zombies, and — especially — The Fall? “Big New Prinz” with steel guitar would be a real treat. Maybe a “Twits Part 2” is in order.

By the way, both The Hickoids and Churchwood are on the Saustex Media label — as are cool bands like Piñata Protest and T. Tex Edwards & Out on Parole. Visit www.saustexmedia.com.

The Hickoids in Santa Fe: Synchronicity alert! I had just finished writing the above review when I checked my email and learned The Hickoids are coming here June 24. It’s their first time in Santa Fe. They play the Underground — that’s the basement of Evangelo’s — with Santa Fe’s beloved The Blood Drained Cows.