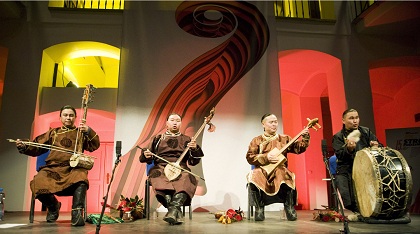 How's this for western hospitality. Some cowardly prick (or pricks) in Albuquerque smashed into the van being used by the band Alash -- Tuvan throat singers in town for the Festival of Asian Cultures. The thief or thieves stole instruments, passports and costumes. This happened on Sunday.

Alash's instruments and costumes were stolen in Albuquerque, New Mexico, on Sunday, May 16, just before the band was to appear at the Festival of Asian Cultures. Some of their passports, visas, and clothes were also taken. The missing instruments are all handmade, and some are quite old. Although devastated by the loss, the group performed at the Festival, using only their voices. One fan wrote of the performance, "This was one of the most amazing moments in my life. These men, the depth of the talent, were inspiring."


Despite their successful performance at the Festival, the band needs instruments to continue their tour. And authentic Tuvan instruments are hard to come by outside of Tuva. Luckily, a friend and supporter in the U.S. has a few to lend. So Alash will be able to make all their concert dates, albeit with a few changes to the repertoire. The musicians are taking it in stride. Sean Quirk, their manager and interpreter says, "We can use this as an opportunity to push our creativity."


Anyone who wants to help can contact the group at alashensemble@gmail.com or the webmaster at jbb@kovitzsystems.net.

Here's a story in the Albuquerque Journal.

And here's Alash in action in Texas a few years ago.