A version of this was published in The Santa Fe New Mexican
September 16, 2011

As Waylon Jennings put it back in the late ’70s, “Don’t y’all think this outlaw bit’s done got out of hand?”

A current odious trend in modern country music is the rise of the pre-fab “outlaw.” Chet Flippo lamented this a few months ago in his column on the Country Music Television website:

“Nowadays, country music seems to have recently gotten outlaws again. Gotten outlaws in the same way that some people have gotten ants or bedbugs or cockroaches. We have a new infestation. To be sure, they’re small outlaws, but they are insistent that they are here.”


Who is he talking about? New Nashville hats like Josh Thompson, Eric Church, and a guy named Justin Moore, of whom Flippo says, “If he’s a true outlaw, then Miss Piggy is Dolly Parton.” 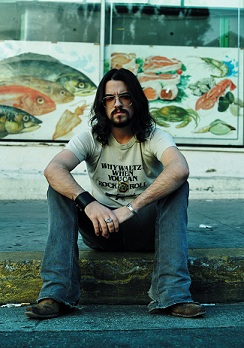 Flippo continues: “What’s a bit alarming is that we seem to have cultivated a generation of young, male country performers who are preoccupied with displaying Outlaw attitude and Outlaw posturing, as opposed to developing real Outlaw musical content.”

What would Waylon think? Well, he’s gone to the honky-tonk in the sky, so we’ll never really know.

But his son Shooter Jennings has weighed in on these would-be honky-tonk heroes namechecking his dad and other outlaw icons. He’s creating a nifty little controversy with a new song and video called “Outlaw You.”

He makes fun of the “perfect boots you got from your record label’s image group,” and he tells the story of his dad, perhaps overstating it a bit when he says that Waylon and Willie and the boys “freed the slaves.”

He’s talking about singers who wanted to record their own songs with their own bands instead of the songs and studio musicians assigned by producers. “Hey, pretty boy in the baseball hat / You couldn’t hit country with a baseball bat,” Shooter sings in the chorus. His conclusion: “They should outlaw you.”

The cool thing is that Shooter was able to get the song played on CMT, where it rose to the top three. He had at least one ally over there — Flippo CMT’s editorial director. Check out the comments on the CMT site — Shooter succeeded in stirring up the hornet’s nest. He’s got his defenders who say, “About time!” while fans of the Mini-Me outlaws say that Shooter is the real poser.

But in reality, the younger Jennings is following a country and alt-country tradition of songs about sticking it to Nashville’s Music Industrial Complex that’s been going on at least since the ’90s. His 2005 debut album was called Put the O Back in Country. The title song, set to the tune of Neil Young’s “Are You Ready for the Country,” had lyrics like “You know that ain’t country music you been listenin’ to. ... There ain’t no soul on the radio.”

Below are some of my favorite Nashville-bashing tunes of this ilk.

* “Fuck This Town” by Robbie Fulks. The song was written out of frustration after Fulks’ unsuccessful attempt to make it as a Nashville songwriter in the mid-’90s. Says Fulks, “This ain’t country-western, it’s just soft-rock feminist crap / And I thought things had hit bottom in the days of Ronnie Milsap.”

* “The Grand Old Opry Ain’t So Grand Any More” by Hank Williams III. The grandson of Hank Williams talks about how “real rebels” like Waylon, Johnny Paycheck, and Jimmy Martin, as well as Hanks Sr. and Jr. were never really welcomed by the uptight country establishment. Hank III plows some of the same ground on his song “Dick in Dixie” released around the same time as Shooter’s “O Back in Country” (which was a cause of friction between the two).

* “Murder on Music Row.” This lament started out as a bluegrass song by Larry Cordell & Country Standard Time. But then it got recorded as a duet by mainstream country traditionalists George Strait and Alan Jackson and received the Country Music Association’s Vocal Event of the Year award in 2000, even though it had lyrics like “Someone killed country music/Cut out its heart and soul / They got away with murder down on Music Row.”


* “Oh Brother, Where’s the Hits?” by Jim Terr. The Santa Fe satirist thumbed his nose at Nashville back when the the bluegrass-heavy O Brother, Where Art Thou? soundtrack — for a couple of minutes at least — seemed to overshadow all the sappy dribble Music Row was churning out. “We’ll learn to fake sincerity, of all the details that’s the key / To pullin’ on your heartstrings and your goldurn MasterCard.”

* “Nashville Rash” by Dale Watson. The little giant of Texas honky-tonk has done several songs talking about how commercial country music sucks. This one, from his 1995 album Cheatin’ Heart Attack is my favorite. “I’m too country now for country, just like Johnny Cash.”


* “Long Time Gone” by Dixie Chicks. Even before the Chicks became traitors in the eyes of many right-wingers because Natalie Maines said that she was ashamed to be from the same state as George W. Bush, they were biting the hand of the industry that fed them. Dumping on the country radio of the day, Maines sang “The music ain’t got no soul / They sound tired but they don’t sound Haggard / They have money but they don't have Cash."

* "Let's Go Burn  Ole Nashville Down” by Mojo Nixon & Jello Biafra. Set to the tune of “Old Joe Clark,” this is a classic country/punk romp. This song took on the sad state of country music in the '90s while boldly declaring "Country don't have flutes!"

* “Nashville Radio/The Death of Country Music” by Jon Langford’s Hillbilly Lovechild. Here’s an elegant 11-minute dreamlike medley complete with electric sitar. “Nashville Radio” is a moving account of Hank Williams Sr.’s demise: “I gave my life to country music, I took my pills and lost / Now they don’t play my songs on the radio / Feels like I never was.” This turns into “The Death of Country Music” — originally recorded by the Waco Brothers, another Langford band, it’s a sneer at people “picking the flesh off the bones” of country music. “We spill some blood on the ashes of the bones of the Jones and the Cashes / Skulls in false eyelashes / Ghost riders in the sky.”

I will play all these songs on the Santa Fe Opry on Friday night  on KSFR-FM 101.1 or www.ksfr.org

Check out the “Outlaw You” video  below: