A version of this was published in The Santa Fe New Mexican
September 2, 2011

Joe West is the only person I know, besides myself, who admits to having consumed Buckhorn beer. He’s not old enough to remember buying it for 79 cents a six-pack at the old Safeway on St. Michael’s Drive, but he’s familiar with the product, which was discontinued long ago — like any brain cells that stood in its path. 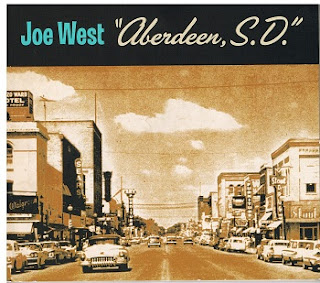 “Sixteen gallons and a case of Buckhorn / I never felt so alive since the day I was born,” West recites in the song “Keg Party at the Muldoon Farm,” which appears in two different versions on his new album, Aberdeen, S.D. The song is about a high-school senior driving a Trans-Am and ready to party. It sounds like a sweet and authentic memory.

You almost can smell the teenage puke by the barn.

West, whose mother still lives in South Dakota, spent his teenage years in Aberdeen. West told the Aberdeen News a couple of months ago that the record is “an ode to Aberdeen and the time I spent in Aberdeen — a town I really love.” The paper noted that West mentions several Aberdeen landmarks — Lager’s bar, Kessler’s supermarket — in the album.

“Goin’ Down to Kessler’s,” the opening track, is a funny little tune about a guy going to pick up some milk and cigarettes (and perhaps some Buckhorn beer?) in preparation for taking the day off work to begin the healing process for a broken heart. The lilting beat and happy fiddle belie any inner pain.

A listener is pretty sure that the narrator is going to pull through. But then, about halfway through, the song changes. The beat slows and minor-key clouds roll in. There’s a heavy cello and desperate blues licks from a guitar. The last minute or so features a repeated tape loop of some guy talking about local Lutheran churches. I’m not sure what it means, but it doesn’t sound healthy.

“Kessler’s” and other songs and sequences on Aberdeen, S.D. remind me a lot of West’s KSFR radio show, Intergalactic Honky-Tonk Machine, an almost surreal mix of music, interviews, and humorous and frequently poignant storytelling built upon the rock of West’s appreciation and respect for the people he encounters. The music on the album has a cool, lo-fi, junkyard sound — think Tom Waits’ Frank’s Wild Years. According to the liner notes, it was “recorded on an old analog 4-track, using borrowed instruments and thrift-store tape decks, microphones, and toys.” (I’m pretty sure that’s a kid’s chord organ on the “original mix” of “Keg Party.” At least it sounds that way.) It was recorded in Aberdeen early this year with some later recordings in Santa Fe.


Some of the songs seem like high-school flashbacks. Others, like “Old Friends” are about a prodigal Joe returning to his old hometown. One of my favorites, “Johnny’s Not Here,” is a bluesy number with a good sleazy sax. It’s about some barroom regulars concerned that the most regular of the regulars is missing. “He’s part of the landscape, part of the atmosphere / But it’s 4:30, and Johnny’s not here.” We never find out what happened to the guy, but there’s definitely a disturbance in the Force.

Then there’s “Keeper of the Light,” a long (six-minute-plus) shaggy-dog tale told over a stand-up-bass-driven blues backdrop, about a guy who collects all sorts of junk:

“I don’t necessarily dumpster dive, but I do like to look into dumpsters,” West explains at the outset of song. He sounds like a kid on Christmas morning as the treasures are unveiled: a 1983-era keyboard/guitar; a CB radio box with the likeness of singer C.W. McCall (remember “Convoy”?); and best of all, display crates of old cassettes — Kenny Rogers, Toto, The Cars’ Candy-O, a Bing Crosby Christmas collection. West realizes he’s made a faux pas by offering to buy the tapes. This stuff isn’t for sale. This guy is a keeper of the light.

And, it almost goes without saying, so is Joe West.