A version of this was published in The Santa Fe New Mexican
Nov. 4, 2011

Here’s a cheesy blurb for Tom Waits’ new album: Bad as Me is as good as it gets. 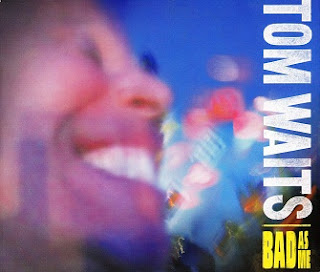 In these difficult economic and political times, hearing music this excellent from an old master who is well along the road to senior citizenship is a sweet and welcome beacon in the fog — even when much of the music is dark and threatening. It’s reassuring that Waits is awake and creating, making music that still matters, growling with the alley cats and bellowing like an immortal.

His output since the beginning of this century has been sparse and uneven. In 2002 he had the dual releases of Alice and Blood Money — both soundtracks from theatrical productions, each of which have some good songs but neither of which really seems like a Waits album. Real Gone is a strange album with lots of experimental human-beat-box effects, lots of anti-war lyrics, and not a trace of Waits’ trademark piano. (Rereading my review of it, I think now I was too generous at the time.) Two years later came his excellent but probably too long three-disc rarities compilation, Orphans: Brawlers, Bawlers & Bastards, followed in 2009 by Glitter and Doom Live.

Waits is such a monster that he attracts a whole boatload of star performers as sidemen, and yet you never once forget that Bad As Me is a Tom Waits album, not a guest-star extravaganza.

He has Marc Ribot and Keith Richards playing guitar (Richards joins on harmony vocals on some tracks), David Hidalgo of Los Lobos on a whole bunch of instruments, Augie Meyers on keyboards, Les Claypool, Flea, and longtime Waits compadre Larry “The Mole” Taylor (formerly of Canned Heat) on bass and guitar, and blues great Charlie Musselwhite on harmonica. Lesser artists would have these names plastered all over the album cover.

The album starts off with a bunch of Waits blues songs — blues from Pluto (more the god than the ex-planet). “Chicago” is charged with Balkan-like horns (has Waits been listening to Beirut?). The rhythm is tense and foreboding. Musselwhite blows his harp like a train whistle. It’s about a desperate family pulling up stakes and moving to another city. The song is new, but Bo Diddley, Howlin’ Wolf, Muddy Waters, and countless others had it in their hearts during the migration from the South in the past century. (The theme is repeated later in the album with the starker, wearier-sounding “Face to the Highway.”)

“Raised Right Men” is outright spooky, with its staccato guitar and Meyers’ creepy organ fill. The song is about domestic discord. A guy quarrels with his woman, who finally gets fed up enough to knock out a tooth. And now “He’s that lonely man on the turnpike in the toll-takers booth.”

Things slow down a little with “Talking at the Same Time,” in which Waits sings, “Well, we bailed out all the millionaires/They’ve got the fruit/We’ve got the rind/And everybody’s talking at the same time,” in his greasy falsetto over a sinister, atmospheric Twin Peaks- style guitar twang.

This is followed by “Get Lost,” some mutant rockabilly with Ribot and Hidalgo dueling on guitar.

“Hell Broke Luce,” more than any other track on this album, will remind listeners of Real Gone — except it’s better than anything on that album. This is a horrifying tale of war in which Waits is mostly backed by crazy tape-loop percussion and frantic, disjointed guitar riffage by Ribot and Richards, and, at one point, a dreamlike horn section that sounds like a Salvation Army band.

Like many of the songs on that album, this is a topical song, dealing with a wounded veteran of the war in Iraq — or is it Afghanistan? Waits starts out with a soldier’s marching rhyme: “I had a good home, but I left. I had a good home, but I left, right ...” T-Model Ford fans will instantly recall the elder blues hound’s “To the Left, to the Right.” But Waits’ song is far more pointed. His lyrics sink into rants against military brass, the tedium of military life, and the ravages of war (“That big fucking bomb made me deaf ... My face was scorched, scorched ... Kelly Presutto got his thumbs blown off/Sergio’s developing a real bad cough ... Left, right, left”).

Then there’s “Satisfied,” a hard-edged blues (with a strange shout-out to Mr. Jagger and Mr. Richards) with an underlying gospel fervor. And don’t forget the title song, in which the singer tells a lover, “You’re the letter from Jesus on the bathroom wall/You’re mother superior with only a bra. ... You’re the same kind of bad as me.”

If these are brawlers, there are also plenty of bawlers on this album.

“Pay Me,” with accordion by Meyers and fiddle by Hidalgo, has a back-street Parisian feel. “Back in the Crowd,” with an acoustic Spanish guitar, could be a lost Gene Pitney song. “Kiss Me” is a slow, smoky, tune with jazz guitar played by Waits himself. It sounds like the little brother of Waits’ old tune “Blue Valentines.” And “Last Leaf,” featuring Richards on wino harmonies, should remind Waits fans of their classic duet “That Feel” from almost 20 years ago.

There are two versions of Bad as Me — the regular and the “deluxe edition,” which has three extra songs. (I saved a little money, but not much, by buying the regular CD and downloading the bonus tracks from eMusic.) It’s worth picking these up. “After You Die” is a banjo-based hobo meditation on the afterlife. “She Stole the Blush” is more junkyard blues. “Tell Me” is a pretty tune that’s close to radio ready — you can almost imagine Glen Campbell doing this one. It will appeal to those who might be scared off by some of the darker, crazier tracks on Bad as Me.

The disc ends with “New Year’s Eve,” a bittersweet waltz featuring Hidalgo’s accordion. Waits sings of moving on, as well as drunken bonding. “I ran out on Sheila and everything’s in storage./Calvin’s right, I should go back to driving a truck.”

This song should be played in every household in America at the stroke of midnight on Dec. 31.

Blog Bonus: Check this out for laffs