Maybe it’s the bad economy that makes it more fiscally feasible to travel and perform without having to divide up the gate with others. Or maybe stripping music down to its gutbucket basics is a reaction to slick, over-produced rock ’n’ pop. Or, to indulge in some sociopsychological navel-gazing, perhaps the whole thing is a weird symbol for 21st-century isolation.

Whatever the case, one-man bands continue to haunt the edges of the rock ’n’ roll underground.

The concept is basic: one man plays guitar, banjo, ukulele, or sometimes keyboards with his hands, drums or other percussion with his feet, and harmonica or kazoo with his mouth.

Among the current practitioners of the art are Scott H. Biram, whose album Bad Ingredients is one of the finest records of the year; Bloodshot Bill; King Automatic; Bob Log III; John Schooley; Jawbone; Urban Junior (who calls his music “Swiss-spankin-electro-trash-garage-boogie-disco-blues-punk”); and Mark Sultan aka BBQ, whose acrimonious split from the King Khan & BBQ Show is an example of how even a two-man band can be a petri dish for personality conflicts.

Here are some recent one-man wonders whose CDs have crossed my ears in recent weeks: 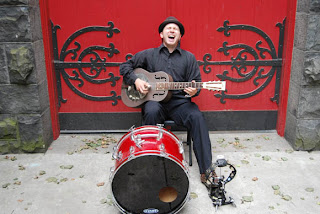 * Burn Down by Poor Boy’s Soul. I first became aware of Trevor Jones, the one man behind this band, by way of a strange email from his publicist: “I have been trying to get this band serviced to you for weeks now. Want to know why I haven’t been able to get this out to you? He went missing. Got a call today from him, apparently he was in jail in a small town in North Dakota. Trevor rides the freight trains around the U.S. and, well, he got busted.”

That modern-day hobo-minstrel tale got me curious. I had to hear his voice before the railroad bulls silenced it forever.

Jones, an Oregon resident, got his band name from an old outlaw ballad, “Wild Bill Jones”: “I pulled my revolver from my side / And I destroyed that poor boy’s soul.”

He started out as a metal and punk player. But after he started riding the rails, he apparently got possessed by the lonesome ghosts of Woody Guthrie and Lead Belly. “I bought a cheap acoustic and started learning folk, bluegrass, and blues from folks on the road. That’s when I started developing the style of music I play now,” he says in his official bio.

His voice has a gruff edge to it, but it’s not overdone. Crediting Mississippi Fred McDowell as a major influence, PBS plays a mean National guitar. Most of the seven songs here are hard-edged blues stompers, starting out with the title song — a slow-moving, ominous tune that sounds as if the singer is about to do something regrettable.

My favorite at the moment is “Nails in the Pine.” It’s the most uptempo number, reminding me of The Reverend Peyton’s Big Damn Band. Also notable is the almost-five- minute “Ain’t Comin’ Back,” which has a dark, spooky feel. The way it’s recorded, you might think you’re hearing it from a car radio in the 1950s (right before your car breaks down on a dirt road near the local serial killer’s house).

The biggest surprise on the album is the last song, a somber seven-plus minute ballad called “Annalisa.” Sounding like a more melodic Jandek song, this is a moving tribute to Jones’ sister — who, he says, has overcome many obstacles. “Annalisa, you’re stronger than those demons in your head,” goes the refrain.

* The Chicken Album by O Lendário Chucrobillyman. This is some of the craziest music I’ve heard in some time. Faithful readers of this column will know that’s saying something. 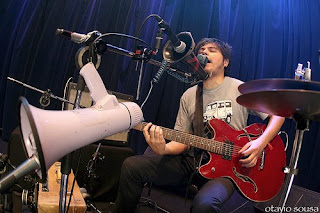 Chucrobillyman, whose real name is Klaus Koti, is a one-man band from Brazil, who plays American blues with shades of Brazilian country music and some pretty snazzy percussion.

He sings in English and Portuguese. This record is pure Amazon River voodoo.

The eight-song album starts off with a tune called “Chicken Flow,” a slide-guitar blues romp with a frantic clacking beats. Add then he starts clucking — singing actually — like a dadgum chicken!

The late great Hasil Adkins — the West Virginia maniac who is the patron saint of most of these contemporary one-man bands — did a compilation called Poultry in Motion. Chucrobillyman takes that concept one level further. He doesn’t cluck on all the cuts, but a listener gets the feeling that the chicken spirit could return at any time.

All the hens in the henhouse better beware!

This album was originally released in 2008 and was recently re-released by Off Label Records, a German company.

* One man vs. the radio industry: I’m doing a one-man-band special Sunday night on Terrell’s Sound World, freeform weirdo radio. The show starts at 10 p.m. on KSFR-FM 101.1, and the special segment begins right after the 11th hour. It’s streaming atcha and screaming atcha on the web at www.ksfr.org. And don’t forget The Santa Fe Opry, the country music Nashville does not want you to hear, same time, same station, Friday nights.

* One-man Spotify: Hear a selection of some of the finest past and present one-man (and one one-woman) bands on my new Spotify playlist One-Man Wonders. (Unfortunately, neither Poor Boy’s Soul nor O Lendário Chucrobillyman is on Spotify, at least yet.) It’s at www.sharemyplaylists.com/one-man-wonders.