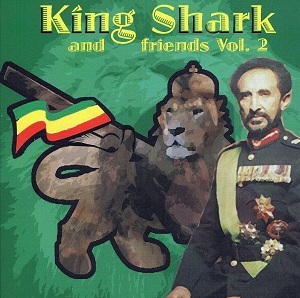 Good news, reggae fans — the king has returned. I’m talking about King Shark, the nom de tune of Alphanso Henclewood, that Greenwich Farms, Jamaica, native who has been playing and promoting reggae in New Mexico on and off for more than a decade.

I’m no reggae expert, but I’ve liked the music ever since “The Israelites,” that bizarre freak-accident single by Desmond Dekker, twisted my head off in the late ’60s. The music of Bob Marley and the Wailers and the soundtrack of The Harder They Come represent a big chunk of my 1970s music memories. My favorite reggae album still, after 35 years or so, is Bunny Wailer’s Blackheart Man. But, to be honest, I didn’t really keep up with reggae after Marley and Peter Tosh died. I’ll probably sound like a rigid old coot, but so much of the reggae since those golden years sounds too poppy, too hip-hoppy, and just not as interesting as my old favorites. But ever since about a year ago, when King Shark started turning me onto his stable of musical friends, I’m enjoying reggae again. I’d never heard most of the artists on these collections, but they remind me of what I consider reggae’s classic era, especially the vocal-oriented ones.


The highlights of King Shark & Friends, Vol. 2 (the first volume was released more than 10 years ago) include “Blaze,” a minor-key tune by Peter Rankin that features some tasty organ and electric piano interplay; “Susie Wong,” a love song by singer Fred Locks; and King Shark’s own “Escape by Night,” a story about a daring escape from a slave ship.

Battle of Champions is also packed with some fine tunes. My favorite on this one is “Forward” by the gruff-voiced Captain Barkley. Also worthy are “Me Oh My” by Pretty Rebel, one of the only female voices in these collections, and “Siren,” by Lone Ranger, which reminds me of Toots & The Maytals, though Ranger’s voice is much deeper than Toots’. These albums are available at www.rastalives.com. * Heavy Rescue by Broomdust Caravan. Led by doghouse bass plunker Johny Broomdust and featuring vocals by Felecia Ford (whom we originally came to love through Hundred Year Flood), the Caravan is basically a local supergroup that includes some of my favorite usual suspects from Santa Fe area bands. The group plays good honky-tonk roadhouse music, as evidenced by this six-song EP.

My favorites here are the Spanish flavored “Hidin’ Out in Española” and the boot-scootin’ hoedown “10,000 Miles.” The title song of the CD, which is dedicated to the Santa Fe Fire Department’s heavy rescue unit, should have been released a few years ago. It would have made a far better theme song for the TV series Rescue Me than that annoying tune byThe Von Bondies . * Save the Machine by Drastic Andrew. I’m not sure whether “Drastic Andrew” is the name of the band or of the singer/songwriter Andrew MacLauchlan, who leads it. Mighty Joe West produced this album, and some of Frogville Records’ finest play on it.

The highlights include the opening cut “John Henry” (a rocked-out update of the classic folk tune), “Inner Space,” which is spacey blues-rock, and the title song. That one’s an all-purpose protest song ranging against ecological disaster, Wall Street greed, corrupt politicians, etc. But the snappy beat and the melody are as catchy as is humanly possible.

* Living Large by The Swank Brothers. This seven-song EP is an easy-going collection of funny songs by the brothers Swank (Daniel “Flash Swank” Hagen on vocals, guitar, and bass, and Nigeria-born Akeem Ayanniyi on vocals and percussion.)

The sure bets are “I Got High Last Night” (the story of a guy who was so messed up the night before that he forgot where he parked his car), “We Gettin’ Naked for the Super Bowl” (a love song), and “I Coulda Got It for Ya Wholesale,” which is about a first-person portrait of an annoying character everybody knows.

New Mexico Sky spotlights songs about this Enchanted Land, including “God Bless New Mexico,” a spoof of that horrendous Lee Greenwood atrocity (“I’m proud to be a New Mexican where we message when we drive/And you don’t have to wait till tomorrow for mañana to arrive”) and “Santa Fe Cowboy,” which is about the kind of cowboys who wear Gucci hats and spurs by Yves St. Laurent, sung to the tune of “Streets of Laredo.”

Don’ Me Started has mostly political tunes: “I’m Gonna Love the Glenn Beck Out of You,” “Public Campaign Finance Song,” “Bosses of the World, Unite!” etc. My favorite is “More Time With My Family,” which is about politicians in disgrace.

That song also appears on Hebrew Nashville — as do “Mama Don’t Send Me to the Big-Box Store” and “Son of a Rabbi Man,” sung by the late Kate Bennett. But this is the only place you’ll find Terr’s tune “Kosher Country,” a song about some hillbilly holler where everyone happens to be Jewish. Folks are pickin’ klezmer music on the front porch and the Katzes and the Cohens are feudin’. You don’t have to be Jewish to love it.