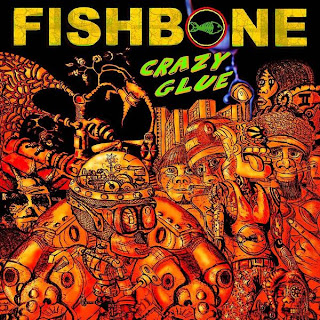 * Crazy Glue and Fishbone by Fishbone. The recent DVD release of Everyday Sunshine, an excellent documentary about this innovative Los Angeles rock 'n' soul band, inspired me to download the group's latest release (Crazy Glue) and their first EP from 1985.  I already had almost everything in between.

I was a casual Fishbone fan in the early 1990s, but I took a turn to the fanatical in the summer of 1993 when I saw them play Lollapalooza in Denver. This was during the height of the Grunge Scare and while I enjoyed the music of Primus, Dinosaur Jr. and Alice in Chains, I remember thinking even then how all of the long-haired flannel boys could learn some serious lessons from Fishbone. The group didn't just sound great. They had something that was seriously lacking in most of the "alternative" rock of the day -- showmanship! I forget exactly how many people were in the band at that time, but there seemed to be about a dozen onstage in Denver that day, most of them running around chaotically, trading off vocals, changing time signatures unexpectedly, one song seamlessly flowing into the next one, frontman Angelo Moore going out into the audience. Truly a breath of fresh air compared with so many self-absorbed acts of the day.

The Fishbone EP was full of the wild spirit that propelled the band from its early days. Among the seven songs was "Party at Ground Zero," their first "hit" -- or at least the first song that got them national notoriety. It's also got a tune that won them some recent notoriety. Remember a few months ago when The Roots caused an outrage in conservative circles by its choice of song to bring out Michele Bachmann as a guest on the Jimmy Fallon show? That was none other than "Lyin' Ass Bitch" from this Fishbone record. (Of course, probably nobody but the most rabid Fishbone devotees would have realized it -- certainly not Bachmann or Matt Drudge -- had Roots drummer Questlove not tweeted about it beforehand.)

Crazy Glue, also a 7-song EP certainly isn't the greatest Fishbone effort. None of the songs are anywhere as memorable as "Party at Ground Zero" or "Everyday Sunshine" or "Bonin' at the Boneyard" or even "Lyin' Ass Bitch." But a quarter-century after their debut, it's still full of the crazy Sly Stone/Funkadelic/crazed ska/metal madness energy. And after all these years, nobody is quite like Fishbone. 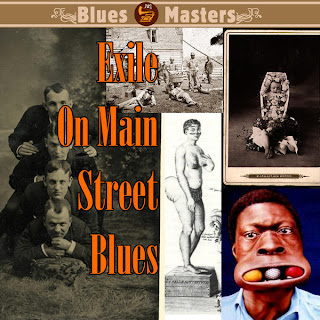 * Exile on Main Street Blues by various artists. First of all, this compilation has absolutely nothing to do with the classic Rolling Stones album -- except perhaps for the fact that Exile on Main Street has a deep spiritual debt to the kind of old blues songs found here and that I bet the Stones as individuals would personally dig most, perhaps all, the songs here.

This 51-track collection features mostly songs about economic hard times and poverty. The lyrics are populated by chain gangs, hobos and people, like singer Bob Campbell who are tired of working on the "Starvation Farm."

Among the highlights are "Miss Meal Cramp Blues" by Alec Johnson, which sounds like an old timey string band. ("I'm so broke and hungry, I could eat a kangaroo," he sings); Memphis Minnie's "Sylvester  and His Mule Blues"; Peetie Wheatstraw's "Jungle Man Blues" (he's singing about a hobo jungle, not a tropical rain forest); and "Strike Blues," a lesser-known John Lee Hooker recording. 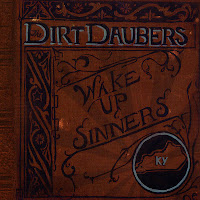 * Wake Up Sinners by The Dirt Daubers. What we have here basically is an acoustic alter ego of the Legendary Shack Shakers.

There are Wilkes originals as well as several fresh takes on traditional tunes like "Wayfaring Stranger and "Single Girl."

Comparisons with The Asylum Street Spankers and even The Squirrel Nut Zippers (especially the title song and "The Devil Gets His Due") -- not to mention them Shack Shakers -- are unavoidable. But the Daubers would hold their own against any of 'em. This is just fine American music distilled in Kentucky.

Not long after I downloaded this I learned that the Dirt Daubers as well as the Legendary Shack Shakers are playing in Santa Fe June 7 as a Thirsty Ear Festival kick-off party. Details here. 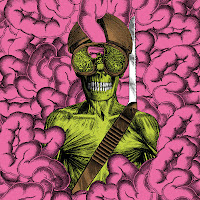 * Carrion Crawler/The Dream by Thee Oh Sees . If you caught my rantings about this year's South by Southwest, you know that one of my favorite "discoveries" was this San Franciso band, who I saw on the same bill as The Gories, Kid Congo Powers & The Pink Monkeybirds and The Spits.


The group is the brainchild of John Dwyer, a singer and guitarist who is a veteran of several bands. Thee Oh Sees includes another guitarist, a female vocalist and keyboard player (the lovely Brigid Dawson) and two drummers and a bassist. They're a prolific crew. This was their second album released in 2011.

Dwyer reportedly started this group as a vehicle to "to release his instrumental, experimental home recordings." (That's in Wikipedia, so it must be true.) Although there's still a lot of lo-fi experimental noise here and sprawling instrumental jams, Carrion Crawler/The Dream is the work of a full-fledged band.

I think my favorite here is the hard-charging half-title song "The Dream." At nearly seven minutes, it's the longest track here. But it never gets boring. Also impressive is "Contraption/Soul Dessert" is another winner. To risk the scorn of the politically correct, it's got echoes of Ted Nugent's "Stranglehold" though it's pumped up with cackling cosmic energy.

Check out this live performance of Thee Oh Sees (thanks to The Free Music Archive).