Mojo in the Court: (A Tuneup Correction)

I got an email this morning from Dick Rosemont, who runs Guy in the Groove Records on Guadalupe Street. He challenged something I wrote in last week's Tuneup column in my favorite voodoo songs list. 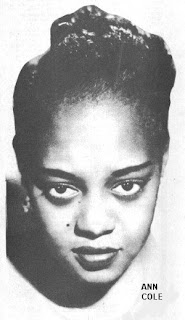 Said Dick, "... despite the prevailing word on the street, Ann Cole did not record "Got My Mojo Working" before Muddy Waters. She was performing it first (having gotten the song from writer Preston Foster) but Muddy's was cut earlier (12-56) than Cole's 1957 take on it."

Uh oh. Dick's a vinyl fanatic and he knows his stuff. And it looks like he's right here. According to several Muddy Waters discographies all over the web, "Mojo" was recorded on Dec. 1, 1956 -- at the same session that produced "Rock Me," "I Live the Life I Love," and "Look What You've Done."

I knew I'd have to look back to see how I'd come to my conclusion about Cole.

My original source on it  wasn't "the street," but a guy named Bob Dylan. Shortly before writing my column, I'd been listening to an old episode of Dylan's Theme Time Radio Hour that had popped up on my iTunes shuffle DJ -- episode 8, about Weddings. On it was a song called "Don't Stop the Wedding" by Cole, an "answer song" to Etta James' "Stop the Wedding."

"That was Ann Cole," the voice of a generation said after playing Cole's song. "In 1956 she recorded a song for the Baton record label that Muddy Waters later took and made into his signature song -- She recorded the original version of  "Got My Mojo Working"

I Googled around and found the Wikipedia entry on the song (voice of Ernest P. Worrell: "Now there's your problem, Vern ..."), which verified what Dylan had said: " ... a 1956 song written by Preston Foster and first recorded by Ann Cole, but popularized by Muddy Waters in 1957."

Checking one of two external links that still work on the Wikipedia page, I came across a federal lawsuit that mentions "Mojo," Anna Cole and Muddy.  In this suit, a woman named Ruth Stratchborneo was suing songwriter Preston "Red" Foster, who wrote "Got My Mojo Working" as well as Muddy Waters and Dare Records owner Saul Rabinowitz, who introduced the song to Anne Cole.

In the suit Stratchborneo claimed that anyone who had anything to do with "Got My Mojo Working" had stolen it from her song "Mojo Workout," which was released in 1960.  (It's not the same song that decades later would inspire a punk rock talk show and podcast on Real Punk Radio.)

Stratchborneo lost the suit. But in his decision, federal Judge Charles Brieant wrote about about the history of the Cole/Waters song:

(Dare Records owner Saul) Rabinowitz first met defendant Preston Foster, also known as Red Foster, in 1957, at which time Foster visited him, offered for sale and played a number of songs. He sang a song, "I'VE GOT MY MOJO WORKING", accompanying himself by guitar, and played a demonstration record which he had previously recorded (Ex. F)

Foster, on October 29, 1956, had filed a claim to copyright for that song as author. On January 9, 1957, Dare entered into a mimeographed form publisher's contract with Preston Foster, by which it acquired "I've Got My Mo-Jo Working".  ...

A month or two later in 1957, Rabinowitz played Foster's demonstration record for singer Ann Cole. Ann Cole learned the song and recorded her artistic arrangement or version of it for Baton Records, under license from Dare. This record is entitled "Got My Mo-Jo Working (But It Just Won't Work On You)", and lists Foster as the author. The Ann Cole record was released, at least prior to April 20, 1957, because "Cashbox", a trade publication, on that date, refers to the Ann Cole rendition as the "Cashbox R&B Sleeper of the Week".

At about the same time, a record "Got My Mojo Working", sung by Muddy Waters, was issued by Chess Records. This also was referred to as a "sleeper of the week" in the same April 20, 1957 edition of Cashbox. Rabinowitz learned of the Muddy Waters rendition within two or so days after samples of the Ann Cole record had been released to distributors.

Rabinowitz testified that Miss Cole had just returned from a road tour with Muddy Waters' band. He concluded that she had been singing the song while on tour, and that Muddy Waters had liked it and recorded it, claiming authorship for himself. The Muddy Waters record bears a copyright credit for defendant Arc, and shows defendant McKinley Morganfield, the true name of Muddy Waters, as the author of the work, and "Muddy Waters" as the singer.


So according to Judge Brieant, the songs appeared virtually simultaneously. I guess that's what you call mojo!