TERRELL'S TUNEUP: Firing Up The Wacos

A version of this was published in The Santa Fe New Mexican
April 27, 2012

It’s been seven years since The Waco Brothers released an album of new material — seven long years since Freedom and Weep.

I’m not sure what caused this delay. There have been some personnel changes — miss your steel guitar, Mark Durante — but the group never broke up. It’s not that the band’s songwriting has dried up.

Frontman Jon Langford has done some solo albums and contributed to albums by his other band, The Mekons. And singer/guitarist Dean “Deano Waco” Schlabowske released an under-recognized but tasty — and free — little album with The Meat Purveyors a few years ago (Deano Meats the Purveyors).

But it took another singer, the Wacos’ Bloodshot Records (sometimes) labelmate Paul Burch, to spark a new Wacos album.

According to the press release, the idea came while sharing pitchers of Guero’s margaritas in Austin during a past South by Southwest festival. Guero’s is just down the street from the Yard Dog Gallery, where, for more than a decade, the Chicago-based Wacos have become renowned for crazed, boozed-up, fiery performances during the annual Bloodshot party. (I was there for that show in March, and I’ll testify that the Brothers, aided by Burch and Commander Cody guitarist Bill Kirchen, were in rare form. They made “Folsom Prison Blues” sound like Godzilla crushing Tokyo.)

To fans of Burch and/or the Wacos, such a team-up might not seem like a natural pairing, no matter how many margaritas were involved. Burch, a Nashville songster, has a voice that’s similar to that of Jimmie Dale Gilmore. His records are far gentler and more melodic than the trademark insurgent country chaos of the brothers Waco. But the main result of the collaboration, a new album called Great Chicago Fire, is a joy that fans of either act should appreciate. 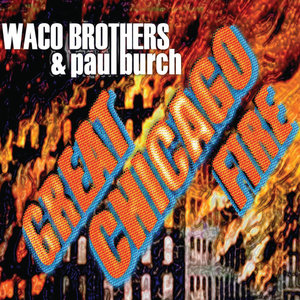 It’s appropriate somehow that a band named after one tragedy would name its latest album after another. “Is there nothing we have learned?/Burn, baby, burn!” goes the refrain in the title song, co-written and co-sung by Burch and Langford. It’s a fun tune, but the album only gets better the deeper you sink into it.

All the singers have great moments here. Burch takes advantage of the Wacos as his raucous backup band in his song “Wrong Side of Love,” a catchy country rocker. And “Transfusion Blues” is a jumpy rockabilly-tinged workout. But he also has some downright pretty tunes here, his best being “Flight to Spain,” a slow, minor-key song that reminds me of Hundred Year Flood’s “Blue Angel.”

Langford’s “Cannonball” is an upbeat swampy tune with tasty tremolo guitar. The best song he wrote for the album is the introspective “Someone That You Know,” but he lets Burch sing it. That turned out to be a good decision. Burch nails it dead.

The foul-mouthed, outrageous, and completely charming Langford is what first attracted me to the Waco Brothers in the ’90s, but through the years I’ve come to look forward to Schlabowske’s contributions as well. With his hoarse Midwestern baritone, Deano sings songs that cut deep. My favorite here is “On the Sly,” a song I hope the Wacos keep in their repertoire for years.

Though the album is full of wonderful new original tunes, it ends with a shoot-’em-up saloon-band cover of Bob Dylan’s apocalyptic “A Hard Rain’s A-Gonna Fall.” The arrangement sounds amazingly similar to Dylan’s Rolling Thunder Revue version (found on the Live 1975 Bootleg Series set). Despite the fearsome lyrics, it’s nothing short of a stomping joy.

My biggest hope is that Great Chicago Fire sparks more new material from the Waco Brothers. 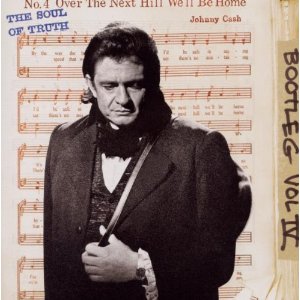 *  Bootleg Vol. IV: The Soul of Truth by Johnny Cash. I’ve always associated Johnny Cash with gospel music. The very first Cash album I ever had back in the early ’60s (Ring of Fire: The Best of Johnny Cash) contained two great gospel tunes. One was Thomas Dorsey’s “Peace in the Valley,” and Cash did a fine version.

But, most important, there was a song called “Were You There When They Crucified My Lord.” I was just a grade-school kid and not particularly religious, but this song scared the crap out of me. It still kind of does. Mournful and intense, Cash puts you right at the scene. And, as the lyrics go, sometimes it causes me to “tremble, tremble, tremble.”

Unfortunately, there’s nothing nearly as powerful on this new collection of gospel tunes by Cash. There are a few jewels in the two-disc, 51-song compilation. But too many tracks suffer from slick, syrupy production, sweetening strings, and cheesy horns. The sad truth is that basically this was par for the course for Cash recordings in the mid ’70s through the early ’80s, that bleak era from which the material for The Soul of Truth was drawn.

The collection includes material from various Cash albums released only on gospel labels. There are also a dozen tunes from an unreleased gospel album recorded in 1975.

Among the worthwhile songs are “Would You Recognize Jesus,” a decent if not essential cover of Billy Joe Shaver’s “I’m Just an Old Chunk of Coal” (complete with a Dixieland horn section), “Don’t Take Everybody to Be Your Friend,” a folksy “Wildwood in the Pines,” a nice understated take on Bill Monroe’s “You’re Drifting Away,” and a rousing “Children Go Where I Send Thee.”

“This Train Is Bound for Glory” has a lengthy spoken introduction as well as Cash’s classic chunka-chunka beat. And even though its marred by an unnecessary string section, “Look Unto the East” is one of those weird mystical Cash gospel tunes, the kind that Rick Rubin so loved when producing the Man in Black’s final few albums.

But way too many of the other tracks sound like they were aimed at a middlebrow, middle-of-the road audience. Personally, the kind of gospel that soothes my soul doesn’t always sound soothing on the surface.
at April 26, 2012