A version of this was published in The Santa Fe New Mexican
April 20, 2012


Mac Rebennack, better known by his stage name Dr. John, is in his 70s. The New Orleans icon has been recording music for more than half a century, has more soul in one of his nose hairs than most of us have in our entire beings, and, honestly, if he wanted to rest on his laurels, he would be deserving.

For many years, that’s what he seemed to be doing, producting virtually funk-free albums full of standards and torch songs, tributes to Duke Ellington and Johnny Mercer, and collections of sentimental New Orleans classics. 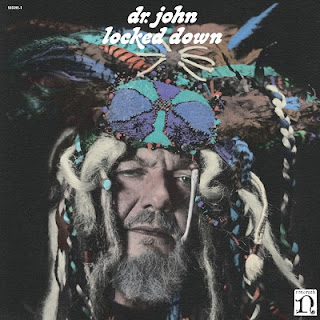 But just when you think the Doc is in danger of turning into an old smoothie, he’ll make a sharp turn back to the crazy spirit that drove him to produce the hoodoo-soaked sounds that made him famous in the first place. There are lesser-known but worthy records like 1994’s Television and 2001’s Creole Moon (featuring a depiction of the voodoo graveyard loa Baron Samedi on the cover). A couple of years ago he released Tribal, a swampy R & B workout that reminded fans of Dr. John’s glory years.

And now he’s back with Locked Down, which for my money is the best album he’s done in decades. The music recalls his early work, but it has a sharp contemporary edge — for which we can thank producer Dan Auerbach, frontman of The Black Keys. But unlike some older artists produced by hip young bucks — for example, Wanda Jackson on some tracks on her recent Jack White-produced album — Dr. John doesn’t feel like a fish out of water here. The music is fresh, not forced.

Auerbach reportedly wanted to get Dr. John back into the thick, atmospheric, heady hoodoo excursions of his early albums — Remedies, Babylon, The Sun, Moon & Herbs, and especially his classic Gris-Gris. What’s so refreshing about this record is that it has most of those elements that made Dr. John, when he was known as “the Night Tripper,” so irresistible. But it doesn’t sound like a paint-by-number re-creation of the old sound.

The gris-gris grabs you from the first track, the title song, in which weird jungle noises give way to a throbbing bass and frenzied snare pounding out a beat punctuated by a slinky electric organ. The Doctor’s familiar Crescent City drawl sounds right at home amid the groove.

If the first song draws you in, the next one, “Revolution,” smacks you in the head. The influence of 1970s Ethiopian jazz is clear here with the baritone sax and spidery organ solo by  Rebennack himself. Like other tunes on Locked Down — “Ice Age” for instance — the lyrics are thick with politics. “Guerilla warfare, Lady Liberty/Propaganda, hypocrisy/Did we lose our Constitution?/Prepare, revolution.” “You Lie” also is full of political outrage. It’s an African-sounding tune as well, featuring Auerbach playing some intense, blues-infused guitar.

“Big Shot” begins with what sounds like a tape loop from some forgotten Dixieland record. But then the real song begins — a dark, slow-moving sax-driven blues in which Rebennack sounds threatening as he sings, “Ain’t never was, ain’t never gonna be another big shot like me.”

That mutated Ethiopian sound returns with a vengeance in “The Kingdom of Izzness”; I have no idea what this spooky song is about, but you probably ought to take Dr. John seriously when he starts out a tune with “Better move fast and better travel light/ Don’t let nothin’ pass when you’re in the night.”

Unlike those wonderful early albums, most of the voodoo on Locked Down is not overt but implied and textural. At least till we get to the song “Eleggua,” which bears the name of the trickster deity. With its jazzy flute and female chorus, it sounds almost like it was ripped from the soundtrack of some blaxploitation movie. I almost expect Rebennack to growl, “That Eleggua is one bad mother ... ”

Locked Down isn’t all black magic and rage though. The album ends with songs about family (“My Children, My Angels”) and faith (“God’s Sure Good”).

Fortunately neither one comes off anywhere near sappy. From start to finish, this is one inspired record.

Here's the doc with a recent TV appearance:


Steve Terrell’s Top 10 (non-Dr. John) Voodoo Songs
1. “Papa Legba” by Pops Staples with Talking Heads. This is from David Byrne’s movie True Stories. The Staples version is on the 2005 remastered version of Talking Heads’ True Stories album.
2. “Got My Mojo Working” by Ann Cole and the Suburbans. You’re probably familiar with the Muddy Waters version, but Cole recorded it first in 1956. (UPDATE: 4-25-12 Check this correction/clarification HERE)
3. “Voodoo Queen Marie” by the Du-Tells. With Peter Stampfel on lead vocals, this tune tells the story of Marie Laveau of New Orleans.
4. “Marie Laveau” by Bobby Bare. This song, written by Shel Silverstein, isn’t as historically accurate as the Du-Tells’ song. But it’s lots of fun.
5. “It’s Your Voodoo Working” by Charles Sheffield. Straight out of New Orleans in the early 1960s.
6. “Li’l Black Hen” by Coco Robicheaux. Fans of the HBO series Treme know what the late Robicheaux did with poultry.
7. “Hoodoo Party” by Rockin’ Tabby Thomas. Another Louisiana hoodoo hit.
8. “Ju Ju Hand” by Sam the Sham & The Pharaohs. They had their Tex-Mex/Memphis mojo working.
9. “Johnny Voodoo” by Empress of Fur. The signature song of a British psychobilly band fronted by a Bettie Page lookalike. What’s not to like?
10. “Hoochie Coochie Man” by Muddy Waters. The Gypsy woman was right.
(Most of these and several other songs can be heard on my Spotify playlist Voodoo Stew)


Back from the shadows again: For the first time since early March, I’ll be returning to KSFR-FM 101.1 to do my radio shows this weekend.