TERRELL'S TUNEUP: Here's to the Ladies

A version of this was published in The Santa Fe New Mexican
April 6, 2012

Before you even listen to No Regrets, the new album from Johnny Dowd, the first thing you’ll probably notice is that every song is named for a woman. 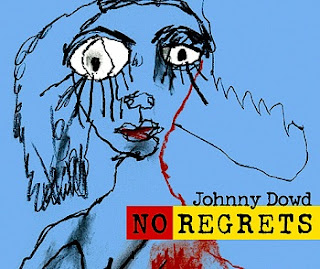 There’s “Betty,” “Billie,” “Sherry,” “Miranda,” “Susan,” “Nancy,” “Ella,” “Abigail,” “Linda,” and “Candy.” Emily and Meryl have to share a song. And while Rita gets a song of her own, she also shares a title with Juanita. (They’re sisters, it turns out.)
Here;s to the Lad
This is something of a concept album for Dowd, with each track telling a story about a woman. “The album is about girls and women I have known, imagined, or seen on TV,” Dowd explains in a press release for the record. “I love them all.”

Dowd also says the working title for the album was “Regrets, I Have a Few.” However, “by the time I finished it, I realized I had no regrets,” he writes. The record shows he took his blows and did it his way. Like Dowd’s best work, the stories he tells here are dark, funny, sometimes tragic, and mostly twisted.

For those who are unfamiliar with the strange pleasures of Dowd, the artist was raised in Texas, Tennessee, and Oklahoma. In recent decades he has lived in Ithaca, New York, where he is part owner of a moving company. I have always liked that Dowd and his band are true working-class heroes. He has his moving business, and singer Kim Sherwood-Caso works by day as a hairdresser. But while his feet are planted in the working world, his head is free to float into strange dimensions.

Dowd is a late bloomer as far as music goes. He didn’t start recording until he was almost 50. In 1997 he released his debut album, Wrong Side of Memphis, which was packed with murder ballads, stories of obsessive love, and the confessions of characters whose lives had long slipped out of their control.

Such themes have fueled the bulk of Dowd’s work ever since. You wouldn’t want a Dowd album without that. But one thing that has evolved is the musical backdrop behind his strange tales.

Early in his musical career, Dowd was labeled “alternative country.” He didn’t sound much like Uncle Tupelo or Whiskeytown, but he had this great Okie drawl. Plus, many of the tracks on Memphis were acoustic-based tunes with country, blues, and folk overtones, while his second album, Pictures From Life’s Other Side, had a couple of wild, mutated Hank Williams tunes. But early on, the country seemed to fade from the Dowd sound, and now there’s not much left except the drawl.

In fact, the dominant sound on No Regrets seems to be a primitive type of electronica, supplied by longtime Dowd drummer Willie B and keyboardist/bassist Michael Stark. I’ll admit, guitar-centric rustic that I am, this was a little off-putting to me the first time I heard it. But after subsequent listens, the electronic throbs and drum-machine crunching seemed to fit the songs.

And Dowd’s personality is at the center of all the music, as it should be. He still speaks most of the lyrics, rather than singing them. And there’s enough obnoxious guitar by Dowd and others to keep things interesting. Another musical departure here is that Sherwood-Caso is no longer the sole female voice on the album. She sings on only two tracks on No Regrets. Four other singers provide the female counterpart to Dowd on various other tracks. I suppose having a variety of women singers goes along with having each song be about a different woman.

No Regrets starts off with “Betty,” a simulated telephone call in which Dowd calls an old high school sweetheart. “Hello! Is this Betty? Hi Betty, guess who this is? No ... no ... It’s Johnny. Johnny Dowd.” She’s not quite sure who he is, but he has apparently been thinking of her a lot in recent years — and not in a healthy manner.

Supposedly all the narrator wants is to get his high school letter jacket back from her. But in the course of the conversation, he lets it drop that he knows where she lives and where her children go to school. (This isn’t the first time Dowd has taken on the persona of a stalker. “Hope You Don’t Mind” from Pictures From Life’s Other Side has a similar narrator.)

Another tale to astonish is “Linda,” set to a foreboding minor-key backdrop. It’s the story of a couple — “when they were together, it was fire and gasoline.” They have two children, but the second one dies a week after he’s born. From there, it’s a descent into hell.

“She dressed in black/felt a life of fantasy/She dressed two kids each morning/Only one that she could see.” The unnamed husband is “talking murder” and dreaming of suicide, while the poor daughter is doing her best to cope with the domestic tinderbox her family situation has become. The songs ends before any atrocity occurs, but a listener is pretty sure that something terrible is in store.

Not all the songs on No Regrets are dark and creepy. Some are actually upbeat. Dowd gets funky on a couple of tunes. Both “Susan” (the story of a stripper in Atlanta) and “Ella” feature funk-filled guitars and keyboards, reminding me of Midnite Vultures — the last Beck album I actually liked much. (As far as critics go, I was in the minority in my love for that underappreciated album.) Come to think of it, Kier Neuringer’s sax solo at the end of “Juanita/Rita” has a little Midnite Vultures in it too.

The prettiest song here is “Sherry.” It’s a ’50s- or ’60s-style slow dance with a cheesy organ that sounds as if it was stolen from a roller rink. You can almost imagine this being played at a high school prom — right before some poor girl gets buckets of pig blood dropped on her. “You say I’m a rat,” Dowd sings in his broken croon. “But you’re OK with that.”

My only regret with No Regrets is that Dowd didn’t include a Bizarro World cover of “To All the Girls I’ve Loved Before.” Maybe Julio Iglesias was busy when Dowd was recording the album.

Here's a video of one of my favorite songs here: