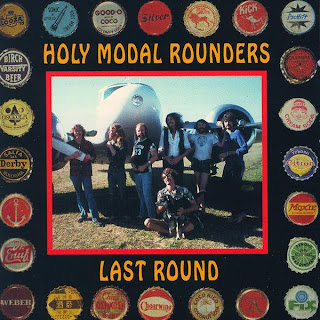 * Last Round by Holy Modal Rounders. If your image of American folk music is some wimpy, self-righteous dude with a guitar spouting tired political platitudes then you need a little Holy Modality in your life. Peter Stampfel and Steve Weber and all their friends and loved ones who drifted in and out of the Rounders, showed how truly subversive folk music can be.

Like the title implies, this 1978 work was supposed to be the swan song for the Rounders. And in reality, it was their last album until a Stampfel/Weber reunion in 1999. (My theory on the real reason they got back together for the album Too Much Fun was to show the "alternative country" fans of that time how alternative country should really sound like.)

Last Round includes some remakes of early Rounder "hits" like "If You Want to Be a Bird" (the original got almost famous for being on the soundtrack of Easy Rider. Here it's coupled with "Wild Blue Yonder."); "August 1967 (Hippies Call it STP)" (an ode to a motor oil treatment, I suppose); and "Euphoria," one of the Rounders' earliest songs. This tune was covered by just about every jugband revival groups of the '60s.

There's also some fresh madness, such as Stampfel's bluegrass/klezmer romp "Poison Sugar," the luaty faux Dixieland "Pink Underwear," an earnest Civil War-era "Year of Jubilo" (you should recognize the melody even if you don't recognize the title) and the fine sleaze rock of "Snappin' Pussy." 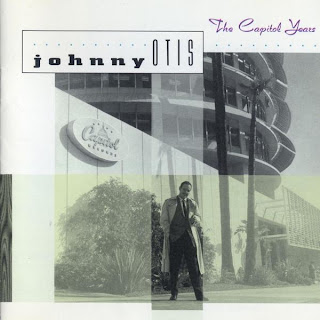 * The Capitol Years by Johnny Otis. L.A.-based Otis mostly is remembered for two things: 1) "Willie and the Hand Jive" and  2) his role as R&B bandleader, producer and talent scout who is responsible for discovering singers like "Little" Esther Phillips, Big Mama Thornton, Jackie Wilson, Hank Ballard, and Etta James -- who died only days after Otis last January.

That history itself justifies Otis' place in the rock 'n' roll pantheon. But many seem to forget that at one point Otis himself was being groomed as a star. He recorded for Capitol Records in the late '50s. Even though his only major hit from this period was the Bo Diddley influenced "Willie and the Hand Jive," this collection shows that he recorded several tunes that probably should have been much bigger than they were.

"Good Golly" (with its not so subtle allusion to Little Richard) is a fine mindless R&B workout, as is the case with "Hum Ding a Ling" and "Ring-a Ling." Another favorite is "Telephone Baby." (I'm not sure of the identity of the woman singing harmonies  and making sexy noises in the background. Perhaps Marci Lee?) But the craziest is "Three Girls Named Molly Doin' the Hully Gully."

Johnny works Screamin' Jay Hawkins' side of the street with "Castin' my Spell" (helped by singer  Marci Lee) and "Voodoo Woman," a slow blues. And there's a couple of "Hand Jive" sequels. "Willie Did the Cha Cha" puts a pseudo Latin beat on Otis' big hit. Meanwhile, "Crazy Country Hop" is an irresistible swampy "Willie" clone.

Some of these songs feature other vocalists. There's Mel Williams, who takes the lead on "Well, Well, Well," (with a beat that sounds like it's got some New Orleans in it) and a slow, greasy ballad "Little Angel." And then there's  Marie Adams & Three Tons of Joy doing a live R&B take of the old Tin Pan Alley chestnut "Ma He's Making Eyes at Me." I'm not sure if it's live or "fake live" but the screaming teenagers are an essential part of this recording. 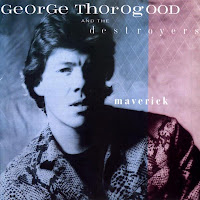 *Maverick by George Thorogood & The Destroyers. I believe that Thorogood is one of the most underrated rockers of the '70s and '80s.

This album, which I used to have on cassette tape, is one of his best. Maybe his very best, since, after all, this is where his classic "I Drink Alone" came from. (True confession, I can't hear this song without my mind drifting back to this San Diego strip joint my cousin took me to and to the blonde miracle-in-silicone who danced to it. She truly made the song her very own.)

Thorogood always was a good John Lee Hooker interpreter. Earlier in his career he did a fine "Boogie Chillun" and a respectable "One Bourbon, One Scotch and One Beer." Here he tackles "Crawlin' King Snake." While it's nowhere near Hooker's original, Thorogood does a snarling, stripped down take on it.

And Thorogood is responsible for the second "Willie and the Hand Jive" I downloaded this month.

Other Thorogood  diamonds on this include "Gear Jammer" with its crazed slide guitar lead that now seems like a precursor to a thousand blues-band bashers; "Go Go Go," a lesser-known Chuck Berry song; and the title song, which yes, is the theme song for the old t.v.western starring James Gardner. Hank  Carter's rooty-toot sax makes this song. 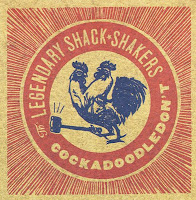 * Cockadoodledon't by Legendary Shack Shakers. I downloaded this one not long before I saw the Shakers with their auxiliary group, the Dirt Daubers at Santa Fe Sol earlier this month.

This is one of their earliest albums, released back in 2002 when Joe Buck was still with them (before he devolved into Joe Buck Yourself)

Besides some crazed, hopped up J.D. Wilkes originals like "Pinetree Boogie," "Blood on the Bluegrass," "Help Me From My Brain" and "Shakerag Holler," there's some crazed, hopped-up covers like Slim Harpo's "Shake Your Hips," the classic "Bullfrog Blues" (the best version of this I've heard since Canned Heat's first album) and Benny Joy's "Wild Wild Lover."

This one's almost as fun as one of their concerts. But not quite.

Enjoy this video I shot at their Santa Fe show: