A version of this was published in The Santa Fe New Mexican
June 22, 2012 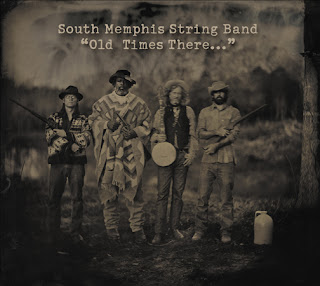 Like I said, it was fun and the talents of the three musicians worked amazingly. And, while many fans expected that record to be a one-off, happily they were wrong. The South Memphis String Band is back with a new member, bassist Justin Showah. And the new one is no sophomore slump. In fact, this one’s got an edge to it.

The central theme of Old Times There...  is race. This integrated  band confronts the topic head on, including songs new and old, including some using archaic, and, frankly, racist lyrics that are bound to shock the squeamish.

“Our aim is to unite the KKK and the NAACP in mutual hatred of SMSB,” Hart joked in the press release for the album. But the real purpose is to display these old attitudes and tensions, confront them head on, poke ‘em and play with them, and unveil some of the underlying truths some of these songs contained. “There was some steppin’ and fetchin’ going on back then,” Hart said, “but there was a clever subversive subtext to it.”

In some songs, the band treats race in a playful manner. “For instance in “B-L-A-C-K,” Dickinson sings one verse, “Some people don’t like their color, but I’m just crazy ‘bout mine / I know I’m white and I’m ugly, but I get by just fine.” In the next verse, Hart has the exact same tale to tell — except he’s black and ugly.

In the song “Turnip Greens,” Hart sings, “Say, the white folks go to college, and the nigra goes to field/ The white folks learn to read and write and the nigra learns to steal.” The song is credited to Sam Chatmon of The Mississippi Sheiks, an influential African American string band back in the 1920s.

Fans of Bob Wills might see a connection with the original lyrics of the western-swing classic “Take Me Back to Tulsa”: “Little bee sucks the blossom, big bee gets the honey / Darkie picks the cotton, white man gets the money.” True, archaic slurs like “nigra” and “darkie” are offensive. But both the Chatmon and the Wills song point out racial and economic injustice.

A highlight of the album is a historical vignette recorded in the 20s by that old Jug Stomper Gus Cannon (and originally recorded under the name “Banjo Joe.”) “Can You Blame the Colored Man” is about Book T. Washington — the president of the Tuskegee Institute, visiting President Teddy Roosevelt in the White House in 1901.

Roosevelt is portrayed as cordial and generous: “When Booker knocked on the President’s door, ol’ Booker began to grin/ He almost changed his color, when ol’ Roosevelt said to come in / ‘We’ll have some dinner in a  little while.’”

This White House dinner was a momentous event in the nation’s history. There was anger and dismay among some Southern whites.

One paper, the Memphis Scimitar published an editorial a few days later saying:

“The most damnable outrage which has ever been perpetrated by any citizen of the United States was committed yesterday by the President, when he invited a nigger to dine with him at the White House.


The Nashville American was more moderate in tone:

“The South refuses social recognition or equality to Booker Washington not because of any hatred of him, not because of his respectability, but in spite of it. It denies him social equality because he is a Negro. That is the South's reason. ... To accord social equality to Negroes of Booker Washington's stamp would be a leak in the dam. It would cause other Negroes to seek and demand the same recognition.”


“Now could you blame a colored man for makin’ them goo-goo eyes,” Hart sings.

Booker T. Washington in this song is as amazed as anyone that a former slave was being welcomed into The White House. According to the song, after the dinner Washington celebrated by hiring a horse and carriage to “take the whole town in.” Sings Hart, “He was drinkin’ wine/He was feelin’ fine.”

Not every song on Old Times There ... is racially charged. There’s some dandy instrumentals as well as some good-times tunes like “Just Like a Monkey,” which has the refrain “You’re bound to look like a monkey when you get old.” This one’s been recorded under various titles by lots of folks, my favorite being Hank Penny’s western-swing rendition.

Basically The South Memphis String Band has created a remarkable record that not only recreates a particular sound from a particular time, but forces a listener to confront what was going on in the world that gave birth to that music. 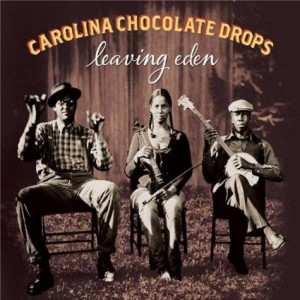 * Leaving Eden by The Carolina Chocolate Drops. If you like this Black string-band sound, you should acquaint yourself with this North Carolina trio of young African Americans. This is their latest album.

There are several fiddle and banjo songs here that know from the world of bluegrass — J.E. Mainer’s  “Run Mountain,” “I Truly Understand That You Love Another Man” (which has a discernible Irish undertow) and best of all “Ruby, Are You Mad at Your Man,” which is one of singer Rhiannon Giddens’ most soulful performances.

But nothing’s quite as much fun as “Po’ Black Sheep” a rowdy, stomping tune that makes me wish I’d been at the first party this song was ever played at.

Here's one of my favorite Alvin Youngblood Hart songs:


And here's the immortal Gus Cannon as "Banjo Joe."