A version of this was published in The Santa Fe New Mexican
June 15, 2012

I really liked Figures of Light’s debut album, Smash Hits, when I first heard it a few years ago. But I was afraid this group might be a flash — maybe ”flicker” is a better word — in the pan. After all, singer Wheeler Winston Dixon and guitarist Michael Downey had taken a lengthy break from the music business before they even made that album.

But I’m glad to say I was wrong. Figures of Light are back again with a new album called Drop Dead, and like their first, it’s blasting, primitive, raw two-or-three-chord rock ’n’ roll. Some call it “proto-punk,” but I think it might even be more proto than that.

Dixon and Downey are aided once again by The A-Bones’ rhythm section (drummer Miriam Linna and Marcus “The Carcass” Natale on bass). And this time out, Mick Collins (of The Gories and The Dirt-bombs) plays guitar. He also produced the album.

A quick history of the Figures: The original group was from New York City, influenced by The Velvet Underground and other pre-punk, post-garage acts of that era. At their first concert in 1970, the group destroyed 15 television sets onstage at Rutgers University (though I just read an article that says the real number might be as high as 27 sets).

An early poster for Figures of Light described their show as “a rock ’n’ roll violence sonata.”

They released their first and only single, “It’s Lame” (backed with “I Jes Wanna Go to Bed”) in 1972. They pressed only 100 copies of the 45. It received little if any airplay outside of New York, and Figures of Light never got anywhere as big as The Velvets or the New York Dolls or even The Dictators. They broke up, smashing their last TV well before the great punk-rock scare of the late ’70s.

We can account for at least two of those original 100 records. One, according to British rock critic David Solomons, was broken in half by Don Imus when the band tried to get him to play it during a remote broadcast in New York shortly after its release.

But more important, another copy was found at a swap meet a few years ago by Linna and her husband, Billy Miller, who owns Norton Records. Impressed and inspired, Linna tracked down Dixon, now a film-studies professor at the University of Nebraska -Lincoln. (Film is his first love and his first medium.)

Dixon talked to Downey for the first time in 25 years or so, and next thing you know, Figures of Light were shining again.

After all those decades, Figures of Light returned to the studio (with guitar help from Matt Verta-Ray, who plays with Jon Spencer in Heavy Trash). They recorded a bunch of new tracks and combined that with the original “It’s Lame “ and “I Jes Wanna Go to Bed” plus some live songs (including the near-six-minute “Ritual TV Smashing Finale”). Thus, Smash Hits came to be. That was 2008 — 36 years after their first recording.

Back to the present: One thing that amazes me about Figures of Light is how similar they sound to their 1972 recordings. Dixon’s voice sounds exactly as it did 40 years ago. They recorded Drop Dead last summer in Brooklyn, taking a mere two days to crank out 20 songs. Fifteen made it to the album. I guess they’re saving the others for the box set. 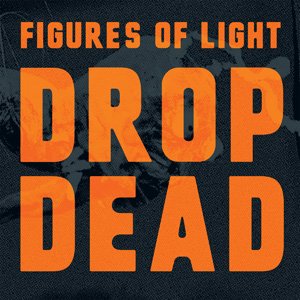 Speaking of boxes, "My Box Rocks” pulls a listener right back to Light world. It’s a swaggering boast of a song. I’m not really sure what it’s about, but who cares. By the end of the song it’s hard not to sing along, proclaiming “My box rocks!”

But that’s just an appetizer for some of the meatier tracks here. “Black Plague Blues” is a primitive thumper about the disease that wiped out as many as 200 million people in the 14th century. This is an old song. No, it doesn’t go back to the 14th century, but the Figures did play it at their first 1970 show. The track contains Collins’ best guitar solo here. I heard the tune several times before I learned that the solo is a backward recording.

Another standout is “Family Fun Night,” which might be this band’s answer to the Ramones’ “We’re a Happy Family.” Dixon repeats the refrain, “Every night is family fun night” like an insane jingle for some really crappy corporate pizza joint.

A couple of songs on Drop Dead make me laugh every time I hear them. One is “You’re Just Another Macaroon,” a put-down of an egotistical jerk, perhaps a celebrity, from a former fan with a melody that could almost be a country song. The title and refrain introduced me to an insult I’d never heard before. I don’t think I’ve ever called anyone a “macaroon.”


The Figures of Light get almost pretty on “With a Girl Like That.” The guitars hint at Byrds-like folk rock, but it’s actually easier to imagine The Rolling Stones doing this song on one of their early albums.

I could get corny here and say The Figures of Light are a beacon in the fog of overproduced, overcalculated, overhyped modern rock. The truth is, Dixon and Downey are just a couple of hip old coots (about my age) who rock harder than most self-styled punks half their age and sound like they’re having twice as much fun doing it.