A version of this was published in The Santa Fe New Mexican
June 29, 2012


As it turns out, despite their wacky turn-of-the-century catchphrase, The Hives weren’t your favorite band.

It seems like only yesterday that this Swedish group was the Next Big Thing. Singer “Howlin’ Pelle Almqvist” and the boys were viewed as rock ’n’ roll saviors who would wrest music from the corporate Huns. Or whatever. I don’t remember exactly how long Hivesmania lasted, but it wasn’t long. And I’ve completely forgotten what the next Next Big Thing was. There have been a few since then.

But even though the hype quickly withered, The Hives have consistently, if not prolifically, made good, fun rock ’n’ roll. The recently released Lex Hives is the band’s fifth full-length album, its first since 2007’s The Black and White album. 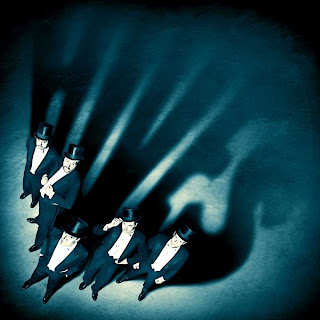 Before writing this I looked back at my review of The Hives’ breakthrough album, Veni Vidi Vicious (from 10 years ago). “These five nonblondes rock with unabashed intensity and a healthy humor,” I wrote. “The relentless guitar attack and back-to-Stooge-basics approach indeed sounds fresh, if not terribly original.”

I could say the same about the new album, though I probably wouldn’t include a cryptic reference to that ’90s one-hit-wonder, 4 Non Blondes.

But many critics have been less than kind about Lex Hives. One British writer sniffed, “You’ll only get a kick out of this record if you think all music made since 1976 is terrible and have absolutely no desire to hear anything new whatsoever.”

Granted, a lot of the tunes here have a certain classic-rock sheen. “Go Right Ahead” sounds like Electric Light Orchestra filtered through T Rex. “I Want More” might be an AC/DC sendup. (Or is that recurring muted familiar guitar riff a sample from Joan Jett’s “I Love Rock ’n’ Roll”?) And on the very first track, The Hives seem to put the whole album in the context of arena-rock knuckleheadedness with their minute-long tongue-in-cheek invocation “Come On!” Here, with overdubbed crowd cheers in the background, Almqvist chants, “Come on! Come on! Come on! ... Everybody, come on!”

If you like it fast and furious — and I sure do — it doesn’t get much better than “These Spectacles Reveal the Nostalgics.” The melody is reminiscent of the Ramones. “Take Back the Toys” is raw anger. “Take back the toys you gave to me/I never knew what to do with them anyway,” Almqvist seethes in the chorus. The final song, “Midnight Shifter,” is aided by a horn section.

But my favorite on Lex Hives is “Patrolling Days.” The chorus goes, “My patrolling days are over/And I ain’t shot nobody since/I fought the big cheese out of office/And taught the hep kids how to dance.” It’s not exactly clear what the heck Almqvist is singing about, but maybe he’s identifying with an old gunslinger who wants to let the world know he’s still a dangerous dude. “I’m still standing in the hurricane’s eye and it’s dancing to my song,” he sings.

The Hives never were my favorite band. But they always sound mighty powerful.


Here are a couple of bands whose music I’ve come to know through the GaragePunk Hideout : 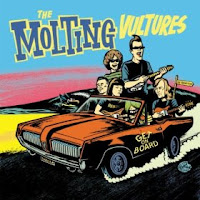 * Get on Board by The Molting Vultures. They come from a land Down Under — Adelaide, Australia to be exact. This rowdy bunch started out as a trio in 2004 playing surf, punk, and garage sounds, but their ever-evolving membership has grown (it’s “an evolving collective,” their Facebook page says) into a quintet. The guitars are fuzzy, the electric organ is prominent, and the beat is maniacal.

Though nearly all the songs on this album are in the two- to three-minute range, my favorite is a long one, the five-and-a-half-minute minor-key odyssey called “Rock ’n’ Roll Emergency.” Organist Jamie Vulture shines here with snaky, Doors-like riffs.

Also worthwhile is the song “Drop in & Go” (which also was the title of the group’s previous album, though the song didn’t appear there). Fans of classic-era garage music will recognize the lyrics of “The Crusher” by The Novas (“Do the hammerlock you turkey necks! Do the eye gouge!”), which the Vultures borrow here.

All the songs are original, except for an excellent cover of Roky Erickson’s “Fire Engine” (originally recorded by the 13th Floor Elevators). 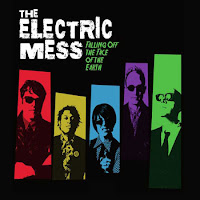 Led by singer Esther Crow (real name Chip Fontaine), The Mess’ basic sound is based on the mid-’60s Nuggets-era sound of fuzz and Farfisa put through the punk-rock grinder. This album rocks even harder than the group’s self-titled 2010 debut.

Highlights here include the infectious opening track, “He Looks Like a Psycho” (“You say you’re choosing right, but he looks like a psycho/You’d better stay in the light because he looks like a psycho”), “Don’t Take Your Bad Trip Out on Me,” which sounds like The Count Five after drinking a case of Red Bull, and the low and slow “You’re Fired,” which may or may not be an ode to Donald Trump.


Blog Bonus: Some videos for your entertainment