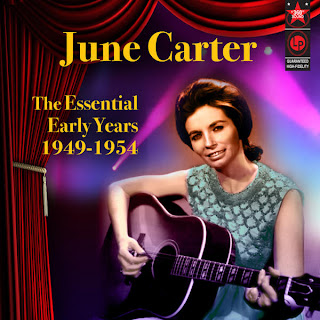 * The Essential Early Years: 1949-1954 by June Carter. Most people think of this lady as Mrs. Johnny Cash. It's a shame that her early solo largely has been overlooked. This collection, (a bargain -- $5.99 for 27 songs) shows Little Junie was a funny, sexy singer and a hundred-proof hillbilly.

A handful of these tunes were on the June Carter Cash retrospective, Keep on the Sunny Side, that Sony Legacy put out a few years ago.

As I've said before, back in the period covered in this collection, Nashville apparently was trying to market June as a real hillbilly version of Dorothy Shay (“The Park Avenue Hillbilly”). This involved a lot of novelty material. But June was really good at it.

A few songs that were on Keep on the Sunny Side are here -- "Root Hog or Die," "No Swallerin' Place" for instance. "Knock Kneed Suzy" is low-tone hillbilly humor, (and thus I love it). And speaking of funny business, Homer & Jethro are all over the place here on songs like "Hucklebuck" and "I Said My Nightshirt and Put On My Prayers."

Meanwhile, she sings about the heartbreak of erectile dysfunction in the song "You Flopped When You Got Me Alone."

But not everything here is a novelty song. Songs like "Honey Look What You've Done," "Crocodile Tears" and  "He Don't Love Me Anymore" are shoulda-been classic country weepers. A young Chet Atkins plays guitar on most tracks 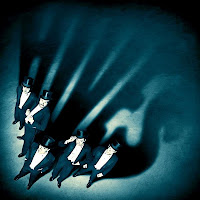 * Lex Hives by The Hives.  Many critics have been less than kind about this album. Granted, a lot of the tunes here have a certain classic-rock sheen. “Go Right Ahead” sounds like Electric Light Orchestra filtered through T Rex. “I Want More” might be an AC/DC sendup. And on the very first track, The Hives seem to put the whole album in the context of arena-rock knuckleheadedness with their minute-long tongue-in-cheek invocation “Come On!” Here, with overdubbed crowd cheers in the background, Almqvist chants, “Come on! Come on! Come on! ... Everybody, come on!”


Sound familiar? I wrote about this album in a recent Terrell's Tuneup. Read the whole thing HERE


But before you do, have a little consumer advice: There are two versions of this album on eMusic: The regular (linked above) and a deluxe edition. The deluxe costs $2 more and has two additional tracks. The catch is, those are only available when you download the entire deluxe edition. Also, you can't get them separately on Amazon or iTunes either. So if you want the songs "High School Shuffle" and "Insane," (and they are pretty good -- I've heard them on Spotify.) be sure to go deluxe. 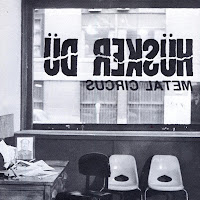 * Metal Circus by Husker Du . This seven-song EP from 1983 is one of the few Husker Du works I'd never bought.

This is known as a transitional record, where Bob Mould, Grant Hart and Greg Norton began to move away from being just another Midwest hardcore band and started paying more attention to songwriting, melody, lyrics, all those good things -- without losing the fire and fury that propelled them in the first place.

Although I tend to gravitate to the Mould songs on most Husker albums, and the opening song, "Real World" is a fine Mould effort, as is the exhilarating "First of the Last Calls."

But the greatest song on Metal Circus is a Hart tune. "Diane" is a chilling first-person account based on the 1980 abduction and murder of a West Minneapolis waitress by serial killer Joseph Donald Ture. The song is written from the perspective of the killer (eight years before Nirvana would take the same approach with "Polly."

"Hey little girl, do you need a ride?/Well, I've got room in my wagon why don't you hop inside?" (In reality, witnesses heard Edwards scream and saw the abductor force her into his car.) "... We could lay in the weeds for a little while / I'll put your clothes in a nice, neat little pile "

I was a latecomer to Husker Du. They had broken up shortly before I bought that used CD of Flip Your Wig that made me a fan. Now I almost wish I'd have heard this nightmarish contemporary murder ballad before I heard all the great Husker albums that followed 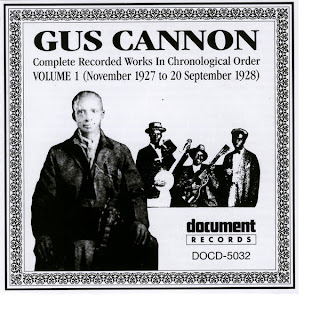 * Gus Cannon Vol. 1 (1927-28).   While writing my recent review of  The South Memphis String Band's Old Times There ...   I wanted to hear Cannon's original recording of  "Can You Blame the Colored Man," which Cannon recorded under the name of "Banjo Joe." Lo and behold, it was right here on eMusic on this fine Document Records collection.

Not only that, but there were five other Banjo Joe songs, which Cannon recorded before forming his quintessential jug band, Cannon's Jug Stompers. On these, which were Cannon's first recordings, he's accompanied by Blind Blake on guitar.

So I nabbed all those, plus a couple of Jug Stompers tracks I didn't already have ("Springdale Blues" and "Riley's Wagon")

Some of the Banjo Joe songs -- "Jonestown Blues" (no, not that Jonestown!), "Madison Street Rag" and "My Money Never Runs Out") were later recorded by the Jug Stompers. The later versions sound fuller with prominent harmonica and, of course, jug.)